Please ensure Javascript is enabled for purposes of website accessibility
Log In Help Join The Motley Fool
Free Article Join Over 1 Million Premium Members And Get More In-Depth Stock Guidance and Research
By Matthew DiLallo – Jun 5, 2020 at 10:07AM

The deal would keep new crude output in check as the world starts to draw down on some of the excess supply that has filled storage facilities to capacity.

According to a report by Bloomberg, OPEC and its participating partner nations have agreed to extend their current crude oil production cut agreement through the end of July. The extension follows a breakthrough with Iraq, which did not fully participate in the initial output curb, making less than half of its assigned cuts last month.

The original agreement called for a historic reduction in global oil pumping of 9.7 million barrels a day (BPD) -- equivalent to roughly 10% of previous production -- starting in May. The output curb was to taper off from there, falling to 8 million BPD from June through the end of 2020, and to 6 million BPD from January 2021 through April 2022. 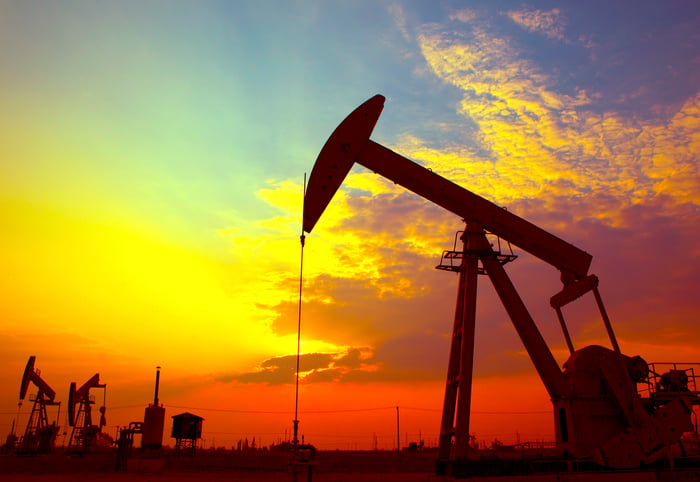 The amended agreement would see global oil producers continue to cut the full 9.7 million BPD of crude production in June and July. That would give the market more time to absorb some of the excess oil supply that filled the world's storage terminals to the brim earlier this year.

While some participating nations didn't fully comply with the initial agreement, it has already had a dramatic impact on the oil market. Crude prices rebounded in May, with WTI, the main U.S. oil benchmark, surging 88% for the month from a level below $20 a barrel to around $35 a barrel. Meanwhile, oil inventory levels have started to decline as some economies have begun to reopen. For example, oil storage levels in the U.S. unexpectedly fell by 2.1 million barrels last week, a much better result than the 3 million barrel increase that had been anticipated.

Because prices and inventory levels are moving in the right directions, several U.S. oil producers intend to restart some of their idled oil pumps in June. For example, EGO Resources (EOG -7.80%) said this week that it plans to bring back the 125,000 BPD of production it curbed in May. That's part of EOG's plan to accelerate production in the second half of the year, when it expects even better oil pricing.