More than $300 million in funding for Novavax’s coronavirus vaccine candidate lifted the shares.

Shares of Novavax (NVAX 1.37%) soared 153.9% in May, according to data provided by S&P Global Market Intelligence, after the company announced more than $300 million in funding for its coronavirus vaccine program and said it initiated its clinical trial. 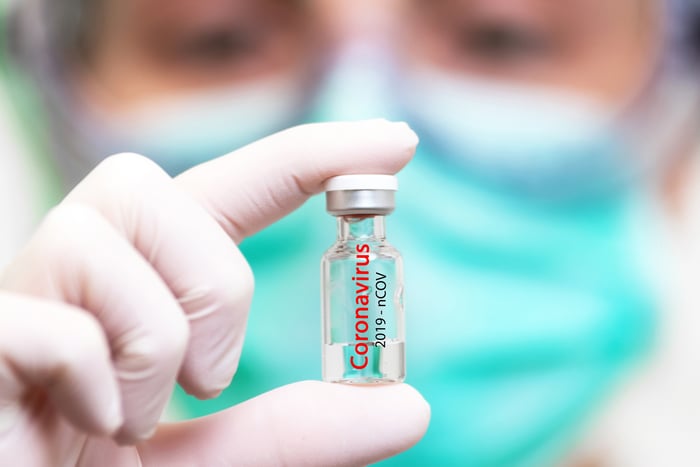 Novavax said the Coalition for Epidemic Preparedness Innovations (CEPI) will invest as much as $384 million in the project after earlier investing $4 million. The company also said it has enrolled the first participants in the phase 1/2 clinical trial of its coronavirus vaccine.

The CEPI funding means this clinical-stage biotech company now has resources to develop the vaccine candidate through phase 2 -- without putting a strain on its finances. The grant also will allow for the rapid scale-up of manufacturing in several locations, an important element considering the eventual need for the vaccine in large quantities. The scale-up would potentially allow Novavax to produce as many as 100 million doses by the end of the year and more than one billion doses next year.

Novavax's clinical trial is enrolling about 130 healthy adults ages 18 to 59 in Australia as part of the first phase, then it will enroll volunteers in various countries and of a wider age range for the second phase. The company said it chose the two-phase approach to help advance the vaccine candidate as quickly as possible.

Investors will be watching for data from Novavax's clinical trial in the coming weeks. The biotech company said it expects preliminary immune response and safety results in July. Any positive news may push the shares higher.

Just this week, Novavax had more good news: The biotech company won a contract from the Department of Defense. The department will fund up to $60 million for the production of coronavirus vaccine components. As part of the deal, Novavax will deliver 10 million vaccine doses to the department this year. Those doses may be used in a phase 2/3 trial or under emergency use authorization if eventually granted by the U.S. Food and Drug Administration.