Please ensure Javascript is enabled for purposes of website accessibility
Log In Help Join The Motley Fool
Free Article Join Over 1 Million Premium Members And Get More In-Depth Stock Guidance and Research
By Will Healy – Jun 6, 2020 at 3:31PM

Many technology stocks have a reputation for resisting dividend payments.  In fact, some new tech companies in this high-growth sector do not earn profits at all. Even when they achieve positive earnings, tech companies often feel that they should invest in themselves rather than in cash payouts.

Yet attitudes are changing as tech companies have become many of the S&P 500's largest entities. Some initiate dividend payments as they become more established. A few dividend stocks have risen yields well above the S&P 500 average of about 1.90% . Some have even built long track records of payout increases.

Case in point, investors will likely find both high yields and dividend growth if they invest in AT&T (T 3.65%), International Business Machines (IBM 2.27%), and Qualcomm (QCOM 3.75%).

On the surface, AT&T's dividend may seem risky. The company has spent billions building a 5G network, even as cord-cutting and intense competition in wireless technology have hurt revenue. Network construction costs have also contributed to long-term debt of $147.2 billion as of the end of the first quarter. 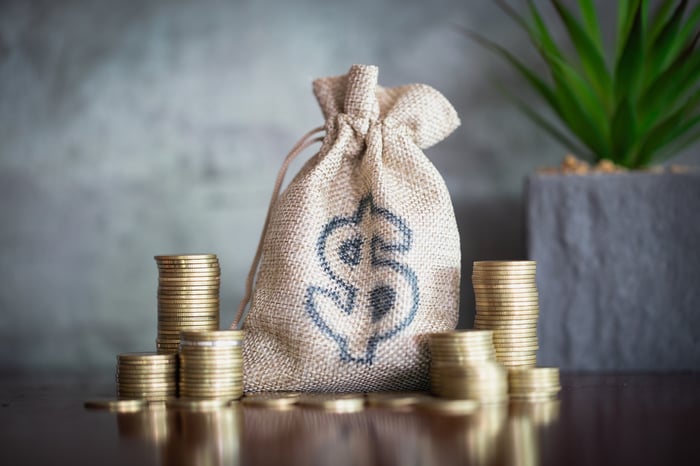 However, AT&T is likely determined to maintain its Dividend Aristocrat  status and 35 consecutive years of dividend increases -- and the company likely has the wherewithal to pull it off. Despite business challenges, the payout ratio stands at around 64.5%. This means AT&T's dividend has some breathing room. In addition, last quarter's free cash flow was $3.9 billion. While far off last year's levels, the company generated enough cash to cover $3.74 billion in dividend payments.

AT&T's dividend, as it stands today, is quite attractive. Sure, the company's five-year predicted average annualized earnings per share growth rate is anemic at just 2.4%.  This many be unimpressive to many investors in light of the company's P/E of 15.8. But AT&T's dividend shows why investors may want to reconsider this stock at 15.8 times earnings. The company's payout of $2.08 in 2020 amounts to a yield of approximately 6.6%.

Further good news for AT&T is that it is only one of three companies that has built a nationwide 5G network. Between the cost and the time involved for such an undertaking, the company likely won't have additional meaningful competitors in this space anytime soon. As Americans increasingly adopt 5G, AT&T and its shareholders should benefit.

IBM has reached a critical junction in its history. Its stock suffered for most of the 2010s as the technology industry moved away from the company's core offerings.

However, IBM has existed for more than 100 years. It has survived by periodically redefining itself.  Its latest attempt at redefinition involves becoming a leader in the cloud. The company recently appointed Arvind Krishna as CEO. Krishna previously headed IBM's cloud and cognitive software division. He also played a role in the company's $34 billion acquisition of Red Hat.

IBM recently reached a dividend milestone: The company's board passed its 25th annual dividend increase,  making it the newest Dividend Aristocrat. Its current payout of $6.52 per share yields just under 5.1%.  Also, at a payout ratio of around 58.9%, there's room for IBM to maintain the dividend even if earnings take a hit.

Thanks to the depressed state of the stock, it sells at a current P/E ratio of approximately 12.5. Admittedly, the company has become inexpensive for specific reasons. The five-year earnings growth rate of 3.9% per year may dampen some enthusiasm over the low multiple. Further, revenue growth has remained an issue for years.

Still, IBM has potential for a comeback. Investors should remember that Microsoft orchestrated a similar revival by making the head of their cloud division the CEO. Also, cloud revenue has become a bright spot among IBM's divisions. Revenue from the cloud increased by 19% year over year in the company's most recent quarter, though IBM's overall revenue fell by 3.4%.

Even if IBM does not see as much success as Microsoft, growth in the cloud division could fund continuing dividend increases for years to come.

Qualcomm has also positioned itself to benefit from 5G, albeit from a different angle than AT&T. The company currently has a near-monopoly on the smartphone chipsets that power 5G service. Although this may change now that China-based Unisoc has announced a competing product.  Apple may do the same.

Still, Qualcomm will likely lead the industry. Analysts forecast massive revenue increases as consumers upgrade to 5G phones. Research and Markets predicts a compound annual growth rate of 63.4% between 2020 and 2027 for 5G chipsets. Though COVID-19 delayed some 5G rollouts,  Qualcomm appears poised to profit as more consumers and businesses switch to 5G.

Given this growth orientation, some investors may forget that this is also a dividend play. This year's annual dividend of $2.60 per share yields almost 3.1%.  While the payout ratio of 70.5% may appear high, anticipated growth could make the dividend less of a burden. Although the company didn't hike the dividend in 2019, it rose every year from 2003 to 2018.

Considering its expected average earnings growth rate of around 25.7% per year for the next five years,  the company should be able to resume payout hikes. That growth rate also makes the current P/E ratio of about 25 look like a bargain.

Once 5G resumes its profit growth, Qualcomm could become one of the more intriguing growth and income plays in tech over the next few years.