Please ensure Javascript is enabled for purposes of website accessibility
Log In Help Join The Motley Fool
Free Article Join Over 1 Million Premium Members And Get More In-Depth Stock Guidance and Research
By Will Ebiefung – Jun 6, 2020 at 3:14PM

Investors are still buying shares in this sketchy Chinese coffee shop. Here's why it's time to sell.

Are you interested in buying Luckin Coffee (LKNC.Y -2.04%) stock? If so, you might want to reconsider that investment. The controversial Chinese coffee shop has seen its share price fall by around 94% year to date because of massive accounting fraud that saw the company fake up to $310 million worth of sales transactions in 2019. The scandal has sent Luckin's market cap from $12.7 billion in January to around $590 million in early June, and the stock now trades at around $2.50 per share, which is less than 1/10th its earlier valuation.

While that price might look cheap to some investors, it isn't. Here are three reasons why Luckin Coffee stock could fall even further. 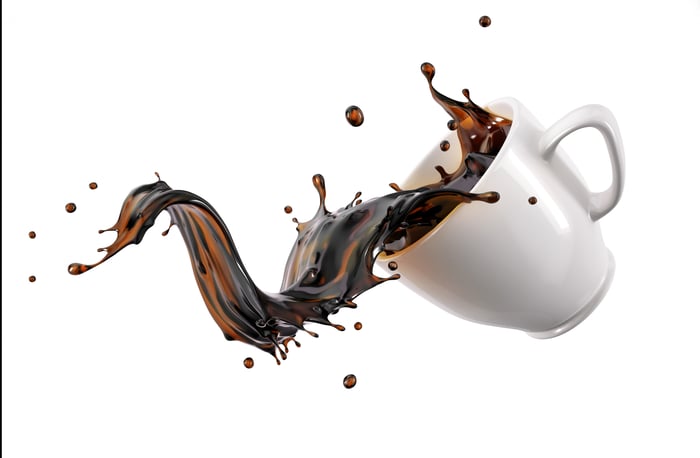 Luckin's accounting fraud couldn't have come at a worse time. The coronavirus pandemic (and the geopolitical blame game surrounding it) have made U.S.-China relations very frosty. And U.S. lawmakers are pushing to implement new restrictions on Chinese companies trading on American exchanges.

In May, the U.S. Senate passed a bill that could make it harder for some Chinese companies to sell shares on American stock exchanges by requiring them to follow U.S. standards for audits and other financial regulations. The legislation will need to be passed by the House of Representatives before being signed into law by Trump, but it highlights an increasingly tense political climate for companies like Luckin.

The exchanges themselves are also cracking down on Chinese listings.

On May 19, Nasdaq issued Luckin a delisting notice. And Luckin investors could be in a world of pain if the company gets kicked off the exchange. The stock will be moved to over-the-counter (OTC) trading or Pink Sheets, and trading will become illiquid. According to Tim Shumway at the University of Michigan, companies can lose between 30% to 40% of their value during this process.

2. Luckin may be expanding too fast for the Chinese market

According to research from the University of Southern California, China's per capita coffee consumption is only five cups a year compared to 400 cups per year in the U.S. and over 1,000 cups per year in Norway and Sweden. But despite the seemingly limited market opportunity, Luckin remains committed to its strategy of rapid and perhaps unsustainable expansion.

According to Data from Thinknum Alternative Data, Luckin has opened a staggering 10 outlets a day in the second quarter of 2020. The company now has up to 6,912 locations, and the market could be nearing saturation.

Management seems to be trying to drive top-line growth by opening new stores, but this strategy could lead to spiraling losses if the individual shops can't generate enough sales to justify their existence. It's time for the company to stop acting like a start-up and focus on actually delivering value to its shareholders.

3. The balance sheet looks too good to be true

So why are investors still buying Luckin Coffee stock despite the company's limited market opportunity and risk of delisting? Put simply, Luckin reports a strong balance sheet, and investors might be holding on to shares based on the perceived value of the cash and equivalents on its books.

Luckin reported cash and short-term investments worth $775.6 million as of Sep. 30, 2019. And on Jan. 17, 2020, the company received $418.3 million in net proceeds from the issuance of American Depository Shares (ADS) and an additional $446 million in proceeds from a note offering, which comes out to a total of around $1.64 billion in liquidity.

While Luckin likely burned through a lot of cash in the fourth quarter of 2019 and the first half of 2020, the value of the remaining cash on its balance sheet probably exceeds the company's $590 million market cap, drawing the attention of risk-hungry investors.

However, the numbers in Luckin's books should be taken with a grain of salt because of the company's track record of fraud. On top of that, Luckin may soon part ways with much of its cash because of the many lawsuits it faces after misleading investors. Luckin faces multiple class actions suits in the U.S. and China, and may become the first Chinese company punished in China for committing fraud in U.S. markets thanks to a revised law that brings U.S.-listed Chinese companies under Chinese legal jurisdiction if they have domestic investors.