Please ensure Javascript is enabled for purposes of website accessibility
Log In Help Join The Motley Fool
Free Article Join Over 1 Million Premium Members And Get More In-Depth Stock Guidance and Research
By Keith Speights - Jun 7, 2020 at 5:44AM

One analyst thinks so.

SVB Leerink analyst Geoffrey Porges has changed his mind about Gilead Sciences' (GILD 0.82%) COVID-19 drug, remdesivir. Less than six weeks ago, he wrote to clients that remdesivir had "limited economic value to the company and the stock." Now, though, Porges thinks Gilead's COVID-19 treatment could be a tremendous commercial success.

The analyst projects that remdesivir will generate sales of $2 billion this year and rake in $7.7 billion in 2022. After that, he expects the antiviral drug could make between $6 billion and $7 billion annually.

Based on Porges' prediction, Gilead should be poised to deliver impressive revenue growth over the next few years. But is he right? 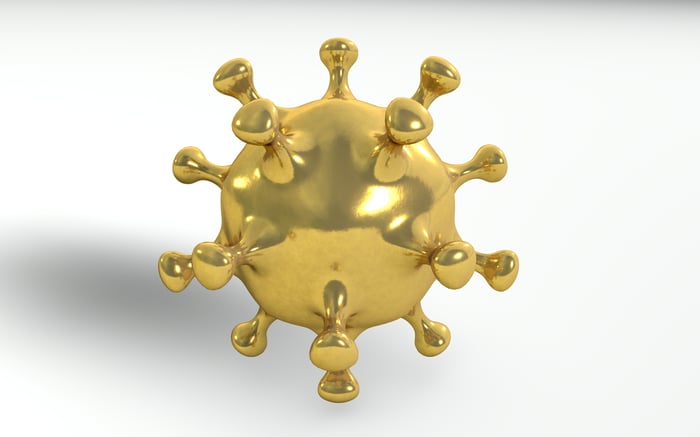 Since Porges gave his less optimistic perspective about remdesivir in late April, there have been a few notable developments for remdesivir. Gilead received Emergency Use Authorization (EUA) for the drug from the FDA on May 1. It won Japanese regulatory approval for remdesivir on May 7.

Perhaps most significantly, Gilead announced results on June 1 from its late-stage study evaluating remdesivir in treating patients with moderate cases of COVID-19. While those results were positive overall, it's fair to say that remdesivir didn't hit a home run. And Gilead's report certainly didn't appear to be good enough for Porges to change his tune about the drug's prospects.

But there is something big that might have changed that could warrant the SVB Leerink analyst's newfound optimism. Porges could have reliable information about Gilead's pricing plans for remdesivir that wasn't available before. He wrote to clients last week that he expects Gilead will price remdesivir at $5,000 per course in the United States. His price estimate for Europe is $4,000 per course, with a price tag of around $2,000 for the drug in other countries.

Porges also anticipates that governments will begin stockpiling remdesivir in 2020. His projection is that close to half of the estimated $7.7 billion in peak sales for Gilead's drug in 2022 will stem from government stockpiling.

Don't count the money yet

Of course, remdesivir isn't approved in the U.S., Europe, or anywhere other than Japan at this point. I think, though, that these approvals will be forthcoming. But there are other reasons why investors shouldn't start counting the extra billions for Gilead just yet.

Most importantly, Gilead hasn't announced its pricing for remdesivir. The big biotech's executives seemed hesitant to set too high of a price for the drug in Gilead's first-quarter conference call in early May. When asked if Gilead would make similar returns on remdesivir as it's made with its HIV and hepatitis C virus (HCV) drugs, CEO Dan O'Day referenced the COVID-19 pandemic in his reply, stating, "We are conscious of the fact that this is unique, and this is different."

There are also many uncertainties about what will happen with COVID-19 in the future. Expectations are high that one or more vaccines could be available next year. If these vaccines are effective at preventing infection by the novel coronavirus, the demand for remdesivir could be lower than what Porges and other analysts are modeling.

And even better treatments than remdesivir could be on the way. For example, Regeneron's antibody cocktail therapy looks promising. So does the antibody therapy that Lilly and AbCellera are evaluating in a phase 1 study.

A good story regardless

It's possible, though, that Porges' about-face on remdesivir could be justified. Even if some of the COVID-19 vaccines are safe and effective, they might not be enough to prevent widespread outbreaks in the future. Remdesivir has a big head start on other COVID-19 drugs in development. Porges' estimates on Gilead's pricing for the drug could be on target.

I'm still skeptical that remdesivir will generate $7 billion or more in sales over the next few years. However, my view is that there's a good story for the biotech stock regardless of how successful remdesivir is.

Gilead remains a juggernaut in both HIV and HCV. It's likely to soon be a major player in the immunology market assuming filgotinib wins FDA approval for treating rheumatoid arthritis. Under O'Day's leadership, Gilead has made smart deals to bolster the company's oncology pipeline. Even if analysts' optimism about remdesivir is too sunny, it won't change my mind about the big biotech's overall prospects.