Please ensure Javascript is enabled for purposes of website accessibility
Log In Help Join The Motley Fool
Free Article Join Over 1 Million Premium Members And Get More In-Depth Stock Guidance and Research
By Will Healy – Jun 8, 2020 at 11:20AM

This dominance may or may not position Intuit stock for significant investor gains.

Intuit (INTU 2.45%) has built an ecosystem in the accounting industry that some might compare to Apple's (AAPL 3.08%) business. As an early innovator in fintech, this technology stock emerged as a leader as it pioneered computer-based financial management and tax filing.

Though fintech has changed dramatically since the company's founding in 1983, millions continue to choose Intuit's software over that of competitors. Despite the company's bright future, investors need to consider multiple factors in deciding whether to buy this stock.

Intuit established its reputation in the 1990s by defeating Microsoft in the race to become the standard for financial software. 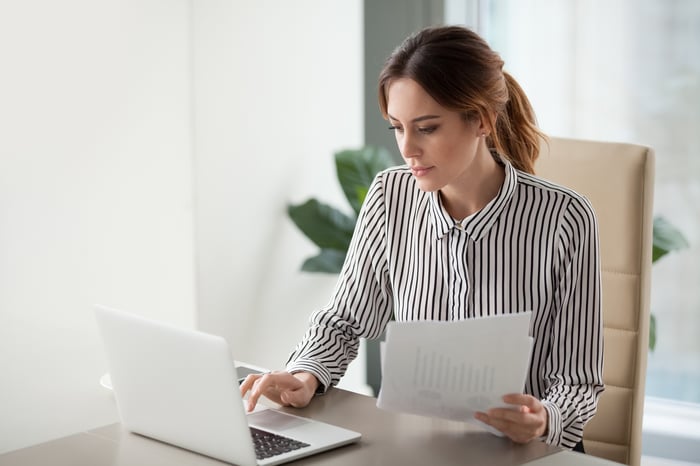 Millions of individuals turn to Intuit's Mint to manage personal finances while using its TurboTax software to file federal and state income taxes every year. On the business side, enterprises large and small use QuickBooks to manage finances for individual companies.

TurboTax leads its specific niche. According to Datanyze, a division of ZoomInfo, QuickBooks products also make up more than half of the market for business accounting software.

Investors should remember that ecosystems do not necessarily dominate. Even Apple has to contend with Alphabet's Android operating system for smartphones and tablets. Likewise, Intuit has attracted its share of competitors.

On the tax front, TaxAct, H&R Block, and countless others compete with TurboTax. Still, the company link to QuickBooks and Mint and the connections to numerous financial institutions help to make Intuit's tax software more efficient.

Intuit continues to masterfully manage its possible competitive threats on other fronts as well. For example, with an increasingly cashless society, Square has built an extensive financial ecosystem. Here, instead of fighting, Intuit cultivated a partnership. The companies formed an alliance in 2013, streamlining transaction data.

Intuit also faced a serious challenge from Credit Karma. Credit Karma gave out free credit score checks as well as tax forms at no charge. This became an obvious threat, so Intuit responded by buying out Credit Karma for $7.1 billion.

Intuit has served its long-term investors quite well over the last 10 years. During that time, the stock has risen by more than 710%, significantly exceeding the 180% return on the S&P 500 over the same period. Intuit steadily moved higher as more individuals, businesses, and taxpayers turned to Intuit software. 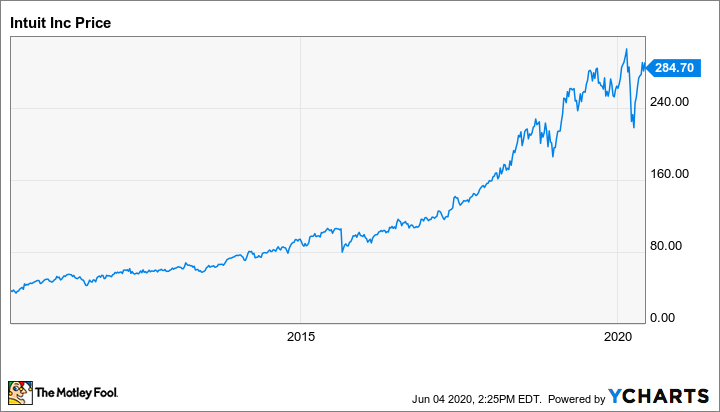 Consequently, its dominance has not come cheap. At 35.6 times forward earnings, it exceeds the company's five-year average forward multiple of just under 30.4.

Moreover, growth may slow in the near future. In the previous five-year period, earnings increased by an average of about 32.5% per year. However, over the next five years, analysts forecast that that profit growth rate will slow to just under 10.2%. While that still constitutes a solid growth rate, it could lead to multiple compression in future years.

The company has not only become a dividend stock, but it has also increased this payout. It initiated a dividend in 2011 and has hiked its payout every year since that time. Nonetheless, the current annual payout of $2.12 per share amounts to a yield of approximately 0.75%. Considering the S&P 500 average dividend yield of around 1.9%, I would not expect the payout to become a motivating factor for most Intuit investors.

The future of Intuit

Intuit appears positioned to maintain its market leadership. Also, regardless of what happens with the economy, businesses will need to manage finances and pay taxes. Hence, neither a pandemic nor any other crisis should undermine the long-term value proposition of Intuit stock.

However, the current valuation and growth trends offer new investors little incentive to buy. The forward earnings multiple is not only historically high for Intuit itself, it also does not justify a growth rate that will struggle to remain in the double digits. Moreover, if looking for dividends, numerous stocks in both finance and tech offer much higher yields.

Intuit's accounting software ecosystem reflects synergies like the ones seen in Apple's iOS. For this reason, it should remain a long-term winner. Nonetheless, investors should hold out for a lower multiple before buying this stock.