Please ensure Javascript is enabled for purposes of website accessibility
Log In Help Join The Motley Fool
Free Article Join Over 1 Million Premium Members And Get More In-Depth Stock Guidance and Research
By Dan Caplinger – Jun 9, 2020 at 6:14AM

Luckin Coffee (LKNC.Y -0.71%) has been one of the most infamous stocks of 2020, as the Chinese coffee company got itself embroiled in fraudulent accounting practices the full extent of which still aren't entirely known. After having had suspended trading in the stock for more than a month following the scandal, Luckin stock has been extremely volatile. Although most had anticipated the sizable decline immediately following the reopening of stock trading on Luckin, a big rebound over the past few days has highlighted the fact that some bullish investors still have hope for the stock.

As dire as things look for the coffee stock right now, there is a bullish argument for Luckin. It's not a foregone conclusion that the company will cease to exist and make its stock worthless. Nevertheless, for Luckin to start to mount a long-term recovery, it needs to have several positive things happen. Below, we'll look at the key ingredients to drive the Luckin bullish argument.

1. Customers have to keep going to Luckin

The accounting scandal called into question Luckin's financial results for the first nine months of 2019. Right now, investors don't have a clear read on exactly what the company's real financial performance has looked like for nearly a year and a half, and that makes it impossible to assess Luckin's true growth trajectory and future prospects. 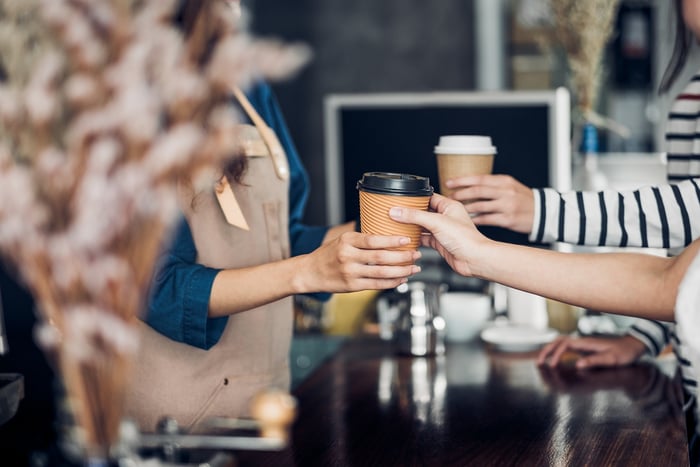 Following the announcement of the fraud, Luckin saw traffic levels rise dramatically. Some attributed those gains to Chinese customers wanting to defend the domestic brand over perceived attacks from foreign investors and regulators. However, others noted that many customers might well have wanted to take advantage of promotional discounts that Luckin had long offered coffee drinkers, with the idea that if the scandal proved true, those promotions might disappear.

After that initial surge, however, Luckin has seen traffic levels drift back downward. That's a trend that Luckin can't afford to see right now, especially if it shows up in whatever restated financials the company releases eventually.

Luckin's rapid store expansion pace helped it make a name for itself even as rival Starbucks (SBUX 0.76%) successfully grew in China. However, Luckin's locations are much different from what Americans are used to seeing at Starbucks. Luckin has gone with more of a kiosk model, and it's increasingly looked to sell unrelated items ranging from snacks to electronic accessories.

In the context of the accounting scandal, moves to broaden revenue might look to some investors like merely a play to justify misstated past numbers. However, if Luckin truly wants to cash in on high-margin merchandise -- the same way that many gas-station convenience stores in the U.S. do -- then it needs to make that strategy clear and show its ability to implement the strategy successfully.

3. Luckin must repair its investor reputation

Finally, it's up to Luckin to restore investor confidence in the company. Losing key executives has been painful, and with major insider shareholders having their stock positions locked up in bank claims over margin loans, there are a lot of distractions. Luckin's board of directors needs to step up and find new leadership that can right the ship and get the company thinking about growth again.

Along with that job, Luckin needs to satisfy Nasdaq officials in order to avoid getting its stock delisted. Staying publicly traded on a major U.S. exchange would go a long way toward establishing Luckin's long-term viability. Without its Nasdaq listing, Luckin will struggle to remain engaged with the broader investing community.

Right now, day traders and other short-term investors are driving a lot of the moves in Luckin Coffee stock. It's tough for long-term investors to come up with plans, given the lack of any significant news about the coffee company. There's still a possibility that the Chinese company  will make it back, but with so much speculation based on factors other than fundamentals, it's extremely hard to build a bullish argument for Luckin that doesn't require a lot of good news.