Shares of the glass manufacturer fell after the company said it expected volumes to decline for the year.

Shares of O-I Glass (OI 3.66%) finished today's session lower after the manufacturer of glass for beer bottles and other such containers issued a downbeat business update Monday. The stock closed down 14.3%.

The company said that it has experienced lower shipment volumes through the second quarter, as expected, due to challenges from lower demand because of lockdowns in various parts of the world. Quarter-to-date shipments were down through mid-May, falling 18% through May, but have improved in recent weeks as the markets it serves have begun to reopen. 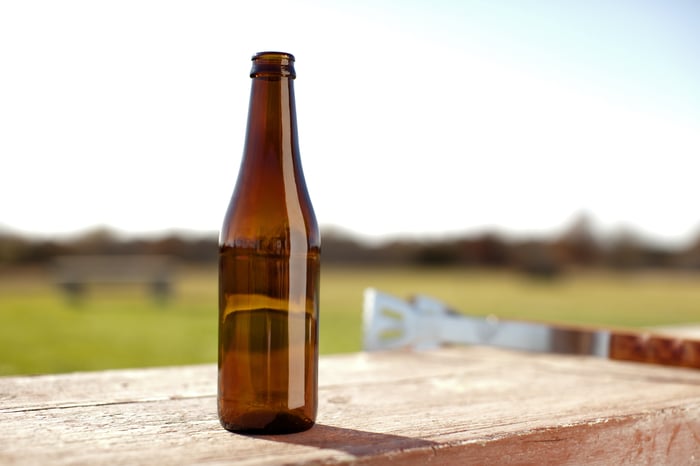 Due to cost-cutting initiatives specific to the pandemic and other measures related to its turnaround, the company delivered positive segment operating results in the quarter through May, and said that free cash flow would be comparable to the year-ago quarter. But it now expects full-year volumes to decline 5% to 10%.

O-I has implemented a number of cost-cutting measures including layoffs and cutting executive salaries, and the company had already said it would suspend its dividend and share buybacks in order to conserve cash. After raising $500 million in debt in May, management believes its liquidity is very strong, and it faces no significant debt maturities until 2023.

O-I, the world's biggest manufacturer of food-safe glass containers, released the report before participating in a Deutsche Bank conference today, but it's clear investors were hoping that the manufacturer's business was recovering faster than it is. Prior to today's sell-off, the stock had more than doubled from its bottom in March, and shares had surged during the first week of June over broader optimism about the economic reopening.

Though the company should eventually return to being a stable cash generator, the business update was a reminder that the challenges from the pandemic aren't simply going to disappear.

Why O-I Glass Stock Popped 11% After Missing on Earnings