Please ensure Javascript is enabled for purposes of website accessibility
Log In Help Join The Motley Fool
Free Article Join Over 1 Million Premium Members And Get More In-Depth Stock Guidance and Research
By Donna Fuscaldo - Jun 10, 2020 at 10:39AM

Small businesses that sell products on the platform will be offered credit lines of up to $1 million.

Small businesses that use Amazon's platform to sell products will be offered credit lines of as much as $1 million with interest rates between 6.99% and 20.99%, reports CNBC. 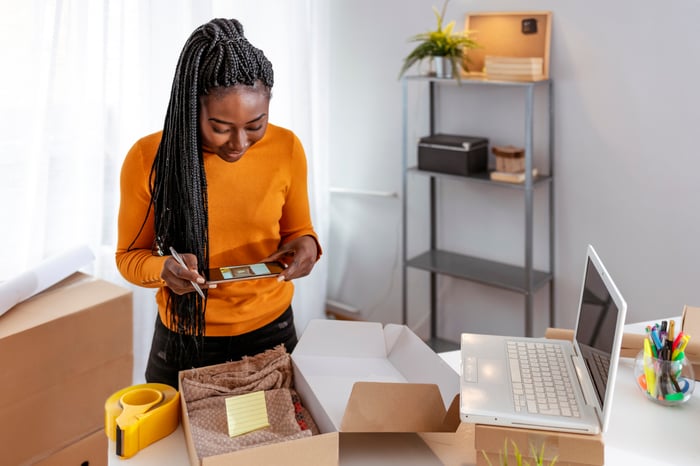 Third-party merchants will soon receive offers to apply for the credit lines. Borrowers will have to pay late fees if they don't make their payments on time as well as a maintenance fee if they don't draw down 30% of the credit, notes CNBC.

Goldman Sachs, which is underwriting the credit lines, will look at the seller's revenue and time on the platform to determine if they are eligible and at what interest rates. Small businesses will have to give Goldman Sachs permission to access their Amazon data in order to underwrite the loans. The tech stock won't be able to access the information Goldman Sachs uses, and the Wall Street firm won't be able to sell other products to the small businesses.  It marks the first time Amazon is moving underwriting of credit lines outside of the company.

The idea that Amazon and Goldman Sachs could offer small business loans was first brought into the public purview in February when the Financial Times reported the two were in talks about an alliance. The paper reported at the time that Goldman was building the technology to enable Amazon to offer loans to small businesses. The project was expected to launch in March before the COVID-19 pandemic hit.

This isn't the first tech partnership Goldman Sachs has inked in recent years. Last summer, it teamed up with Apple to launch the Apple credit card.