Please ensure Javascript is enabled for purposes of website accessibility
Log In Help Join The Motley Fool
Free Article Join Over 1 Million Premium Members And Get More In-Depth Stock Guidance and Research
By Alex Carchidi – Jun 10, 2020 at 6:44AM

Sorrento’s pipeline doesn’t have many blockbuster therapy candidates -- except for its brand-new COVID-19 programs.

Sorrento Therapeutics (SRNE -2.58%) ignited a storm of buying when it announced on May 15 that it had discovered a broadly neutralizing antibody against COVID-19. After rising 73.78% in a single day, the company's stock cooled off over the next several weeks.

While an imminent shareholder lawsuit alleges that Sorrento was overly optimistic with its public claims regarding whether the antibody would be curative for COVID-19, the stock has made a new home in the market's imagination. With its wild growth fresh in memory, investors of all sizes are trying to figure out if Sorrento has what it takes to make them millions. 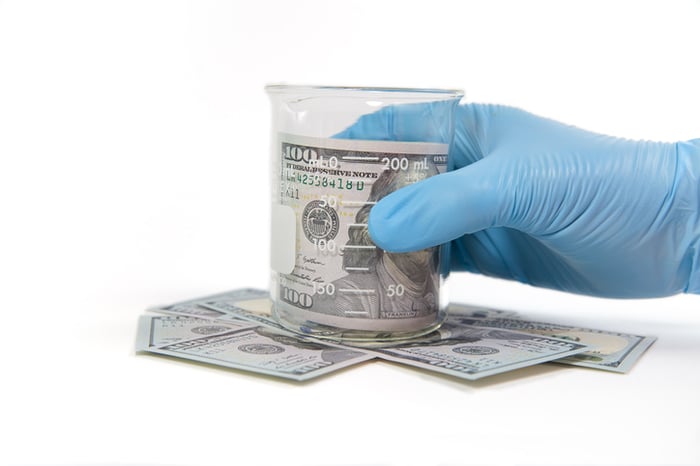 Sorrento's prospects of survival are favorable as a result of focused pipeline development in under-served niches like terminal cancer pain and treatment-resistant chronic knee pain. At the core of the company's chronic pain pipeline is an analgesic drug called resiniferatoxin, which it discovered and manufactures entirely in-house.

Sorrento has three clinical trials investigating potential indications for resiniferatoxin, all of which are ready to advance to phase 3. The company is also seeking an additional orphan drug designation on top of the one it already has with resiniferatoxin for terminal cancer pain. Unlike traditional analgesics such as opioid medications, Sorrento's resiniferatoxin drug allegedly eases pain without incurring systemic side effects like wooziness or constipation, so it would be a better option for patients who are trying to remain active and alert during their analgesic therapy.

If resiniferatoxin is proven to be effective at reducing chronic pain in its clinical trials and it proceeds to the market, it'll be a big fish in a small pond of powerful yet non-intoxicating analgesics indicated for long-term use in challenging contexts.

Sorrento also has three immuno-oncology programs ready to advance into phase 2 trials for multiple myeloma and solid tumors. While other companies have beaten Sorrento to the market for all of these indications under investigation using the same therapy modalities that Sorrento is, it's possible that Sorrento's candidates will perform better in the clinic as a result of their unique qualities, thereby positioning them to steal market share from competitors if they land approval. At the moment, Sorrento's immuno-oncology projects are too early-stage to speculate on its chances of unseating competitors, but in six months there will be more data to examine and the possible trajectories will become clearer.

Last but not least, the company's COVID-19 pipeline is in full swing as of March. Of its three COVID-19 programs, Sorrento has reported that it will be pursuing STI-1499 first. STI-1499 is a potent antibody against COVID-19 viral particles, and it appears to prevent these viral particles from infecting human cells in laboratory experiments. Sorrento envisions this antibody as part of a cocktail containing several other antibodies which, when administered to patients, would treat COVID-19 infection.

Critically, Sorrento already has the substantial manufacturing facilities necessary to produce large volumes of these antibodies in the event that the cocktail is found to be effective in clinical trials. This means that with an expedited approval process, Sorrento could be producing tens of thousands of doses of the first COVID-19 therapeutic within a couple of years. Succeeding in its attempt to make a breakthrough COVID-19 therapy would also doubtlessly cause Sorrento's stock to skyrocket and provide the company with a large and sustainable revenue source.

It's true that Sorrento has a large upside from its COVID-19 drug development efforts. Unfortunately, if its antibody cocktail for COVID-19 doesn't pan out in its upcoming phase 1 clinical trials, the chances of its stock being a millionaire-maker are slim to none. Without the potentially astronomical growth provided by favorable news coverage during the clinical trial process and a massive market upon approval, the company's pipeline probably won't deliver growth on the scale necessary to make millions from small initial investments.

Sorrento's chronic pain programs are robust, but they aren't potential blockbusters simply because of the small patient populations they are seeking indications for. Terminal cancer patients with treatment-resistant pain are a minority, given that opiate medications are typically sufficient to control pain. Furthermore, though Sorrento's chronic pain candidates may be better for some types of treatment-resistant pain, by design they locally destroy the nerve endings responsible for detecting certain types of persistent pain. This means that it is unlikely for these analgesics to be widely used, as the destruction is permanent.

Likewise, the company's immuno-oncology drugs do not have a clear path to a large market share for any of the indications it is seeking approval for. As an example, there are already 40 approved drugs for multiple myeloma in the U.S. Sorrento's immuno-oncology programs could still yield profitable therapies, but they won't lead to market dominance. Sorrento is probably worth hedging a bet on

On the basis of Sorrento's pipeline and the size of the markets it targets, there's a chance that the company could be a millionaire-maker over the next five years if its COVID-19 projects pan out. For speculators seeking a large upside, it's probably worth purchasing shares of Sorrento once it announces its next moves for the COVID-19 antibody cocktail program. While $1,000 probably won't be enough to turn an investment in Sorrento into millions, $20,000 just might.