Please ensure Javascript is enabled for purposes of website accessibility
Log In Help Join The Motley Fool
Free Article Join Over 1 Million Premium Members And Get More In-Depth Stock Guidance and Research
By Zhiyuan Sun – Jun 10, 2020 at 6:55AM

Bayer is arguably the cheapest large-cap pharma stock investors have ever seen -- but can the company keep a key risk at bay?

With the stock so cheap, value investors are probably wondering why they shouldn't go ahead and put a large chunk of it in their portfolios. If a stock is trading significantly below its peers' valuations, it usually means something has gone terribly wrong with its business operations. Let's take a look at what's behind Bayer's underperformance. 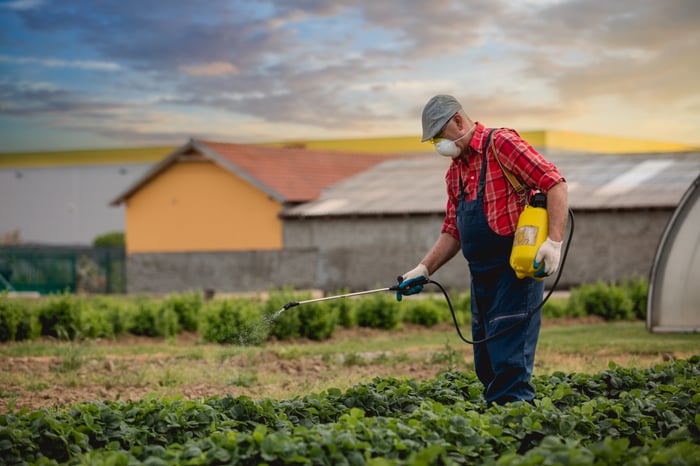 What has gone wrong with Bayer

Investors are afraid of buying Bayer stock mainly because of its disastrous $63 billion acquisition of Monsanto in 2018. Among many agricultural products, Monsanto sells the world's most popular and widespread herbicide, glyphosate (Roundup). In 2015, 45 years since glyphosate's discovery, the International Agency for Research on Cancer (IARC) declared it to be a probable carcinogen. The ruling opened doors to a flood of litigation against Monsanto, for which Bayer is now liable.

There are now 125,000 lawsuits around the world -- including 52,500 in the U.S. -- against Bayer-Monsanto. Plaintiffs allege that exposure to glyphosate gave them cancer and that Monsanto did not disclose the risk in product labels. In 2018, a jury awarded groundskeeper Dewayne Johnson $289 million in damages (later reduced to $78.5 million) to compensate for glyphosate's role in causing him to develop non-Hodgkin lymphoma. The case is now being appealed.

There is evidence on both sides of the argument regarding whether or not glyphosate actually causes cancer. Last year, a study found that long-term exposure to glyphosate for routine activities like gardening increased the risk of developing non-Hodgkin lymphoma by 41%. However, in January, the Environmental Protection Agency declared glyphosate safe for use. A few countries have banned glyphosate completely, while the vast majority enacted legislation restricting its usage.

Meanwhile, Bayer announced in May that it reached verbal agreements to settle between 50,000 to 85,000 of its pending glyphosate cases for a total of $10 billion. Whether everyone will be on board with the idea, however, is unknown. Each plaintiff will only be entitled to an average of $500,000 -- significantly less than the award in Johnson's case. Moreover, Bayer has started to reduce potential settlement figures due to the effects of the novel coronavirus on its core business,  increasing the risk that more plaintiffs will pursue litigation instead of settlement.

Although there seems to be no end to Bayer's litigation turmoil, the rest of its business is doing quite well. In Q1, sales were up 4.8% compared to the same quarter last year, reaching $14.57 billion. Its crops, seeds, herbicide, and fungicide segments in its Monsanto subsidiary all saw double-digit growth compared to last year. Meanwhile, its best selling blood-thinner, Xarelto, witnessed a year-over-year increase of nearly 20%. The company also recognized core earnings per share of $2.73 in the quarter with a healthy net margin of 10%.

In my opinion, even if a small number of cases make it to court and receive a judgment, it could ultimately destroy Bayer's core businesses. Let's say, for the sake of argument, that just 100 plaintiffs cite Johnson's case as precedent and are each awarded $78.5 million in damages. That amounts to $7.85 billion in settlement liabilities, or three-fourths of Bayer's $10.7 billion earnings before interest, taxes, depreciation, and amortization (EBITDA) in 2019. If we ramp up the number of settled cases to 1,000 using the above conditions, then Bayer would be liable for a staggering $78.5 billion in damages and would no doubt be forced into bankruptcy. Meanwhile, the company only has $2.60 billion in cash on its balance sheet.

Unfortunately, the sheer volume of lawsuits makes it hard to predict an outcome. The disagreement between regulatory agencies on glyphosate's status as a carcinogen further complicates matters. Consequently, it is much better to wait and see the outcome of these lawsuits. There are much better ways to invest in cheap healthcare stocks at the moment.