Please ensure Javascript is enabled for purposes of website accessibility
Log In Help Join The Motley Fool
Free Article Join Over 1 Million Premium Members And Get More In-Depth Stock Guidance and Research
By Jennifer Saibil – Jun 10, 2020 at 11:48AM

The company gave a grim short-term outlook in a filing on Wednesday.

Starbucks (SBUX 3.38%) outlined its outlook for its third and fourth quarters as well as fiscal year 2020 on Wednesday, and although it expects improvements, the short term doesn't look too great.

U.S. comps are low, but increasing

Starbucks has opened 91% of U.S. locations as of the end of May, mostly with to-go service. U.S. comps are up from a low of a 63% decrease in April to a decrease of 43% in May, with sales down 32% during the last week of May. Over 90% of orders utilized the drive-thru or mobile order and pay options in the last week of May. 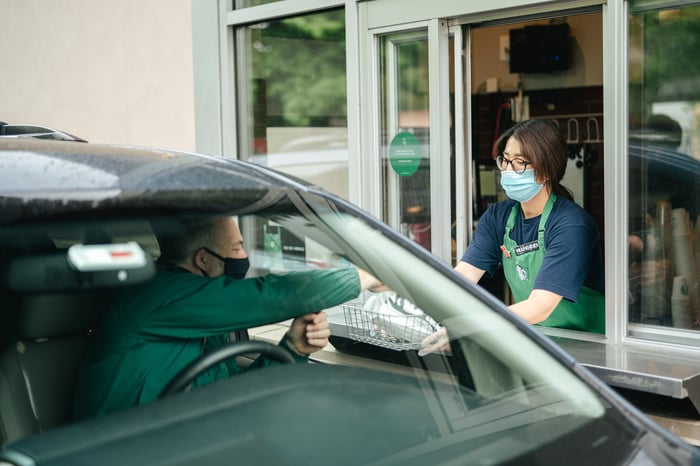 Product mix has remained stable throughout the pandemic, but the average ticket has increased as customers go out less and order more per order.

On track in China

Starbucks expects comps in China to decrease to a range of 20% to 25% for the full third quarter and to move toward flat by the fourth quarter for a fiscal year decrease of 10% to 20%.

The company expects international sales to fall 40% to 45% in the third quarter and move up to a decrease of 10% in the fourth quarter for a fiscal year decline of 20% to 30%.