More employees are working remotely than ever, and Slack's benefiting from the shift.

Slack Technologies (WORK) was already an intriguing opportunity before remote work was accelerated due to the coronavirus. Now that many workers are now doing their jobs from a distance, and some of them are not planning on coming back into a physical office for a long time, Slack's cloud-based collaboration tool is an even more compelling opportunity for investors.

But let's not get ahead of ourselves. Slack only went public about a year ago, and it faces some stiff competition from none other than Microsoft (MSFT -0.26%). So how is Slack doing right now, and what could lie ahead for the company in the coming year? Let's take a closer look. 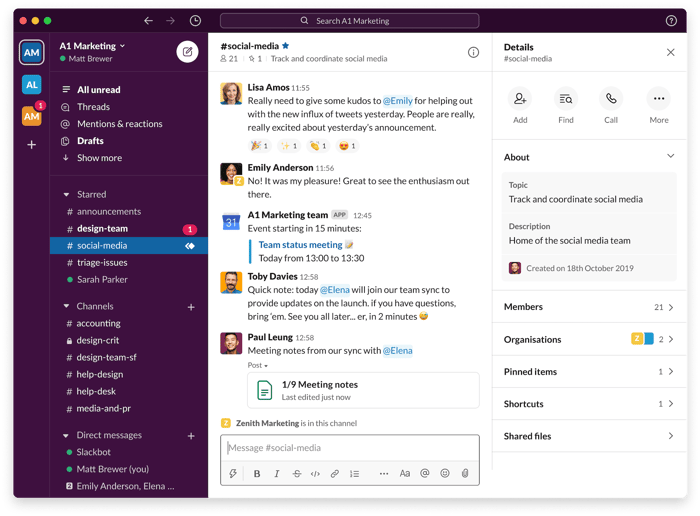 Not even remotely phoning it in

Slack just reported its first-quarter results on June 4, and the company put up pretty good numbers. Sales increased by 50% to $201.7 million, and the company added 12,000 new paying customers, bringing the total to 122,000.

Additionally, the number of customers contributing $100,000 in annual recurring revenue increased by 49% to 963. The amount of time users spent using the cloud-based collaboration tool increased as well, from an average of 90 minutes of active use per day in the year-ago quarter to 120 minutes.

Investors weren't exactly thrilled with the quarter, though, and Slack's share price fell following the release of the results. Investors may be concerned that Slack doesn't exactly have an economic moat surrounding its business. Microsoft has a very similar tool, called Teams, which is popular with a lot of enterprise companies.

While Slack has downplayed competition from Microsoft, the fact of the matter is that the two are locked in a battle for cloud-based collaboration software dominance. Microsoft said recently that Teams has 75 million daily active users, while Slack has around 12 million (though it's worth mentioning that the company hasn't given an update on this number since October 2019).

Part of Microsoft's advantage over Slack comes from the fact that the tech giant includes Teams as part of its Microsoft 365 subscription (formerly Office 365). This bundling of software makes it much easier for companies that are already locked into Microsoft's software ecosystem to adopt Teams for online communications.

Why Slack is still a formidable opponent

Just because Microsoft dominates the corporate corner doesn't mean that every large business will choose Microsoft over Slack. For example, IBM uses Slack for its more than 350,000 users. The same goes for Uber and its tens of thousands of employees.

Additionally, Amazon said recently that its Amazon Web Services (AWS) team will start using Slack as part of a multi-year deal between the two companies. Slack, in return, will begin using Amazon Chime to power audio, video, and screen-sharing capabilities in its Slack Calls feature.

The new partnership shows just how committed Slack is to becoming the go-to service for online employee communication. With Amazon's help, Slack could become an even larger threat to Microsoft's dominance in the business software space.

Where will Slack be in one year?

Slack's stock price has climbed about 28% over the past three months, with some of the jump likely coming from the recent increase in demand for communication tools for remote workers.

Considering that there's no COVID-19 vaccine in sight right now, and even when one appears it could be a while before the virus is completely behind us, Slack's services will be in demand more than ever over the next year. Many companies are already saying that some or most of their workers will be able to work from home even in a post-coronavirus world, and others could follow suit.

This potential acceleration of remote work adoption will be great for Slack's business, though its main rival will likely benefit as well. Even so, investors can likely expect Slack's business to continue growing over the next year. And if the company can successfully fend off increasing competition from Microsoft through its partnership with Amazon and organic growth, then this tech stock could continue to look like a good bet beyond the next year as well.