Please ensure Javascript is enabled for purposes of website accessibility
Log In Help Join The Motley Fool
Free Article Join Over 1 Million Premium Members And Get More In-Depth Stock Guidance and Research
By John Rosevear – Jun 10, 2020 at 11:26AM

Broad COVID-19 concerns are offsetting some good news from the Blue Oval.

Shares of Ford Motor Company (F -3.60%) were moving lower in trading on Wednesday on broader market weakness despite some upbeat news on future products and technologies.

Ford and other automakers' stocks (and many other companies) were trending lower on Wednesday on broad concerns about the potential effects of rising numbers of COVID-19 cases in several parts of the United States.

While auto investors are right to be concerned about potential setbacks to efforts to reopen the U.S., it's probably worth noting that Ford shared some positive news about its future product efforts on Wednesday morning.

First, Ford and Volkswagen (VWAGY -4.64%) announced that as part of the partnership the two companies formalized last year, they will jointly develop and build three commercial vehicles: a new midsize cargo van to be built by Ford, a new small delivery van to be built by VW, and a new VW midsize pickup based on the Ford Ranger. The partners expect to sell about 8 million of the vehicles over their life cycles, starting in 2022. 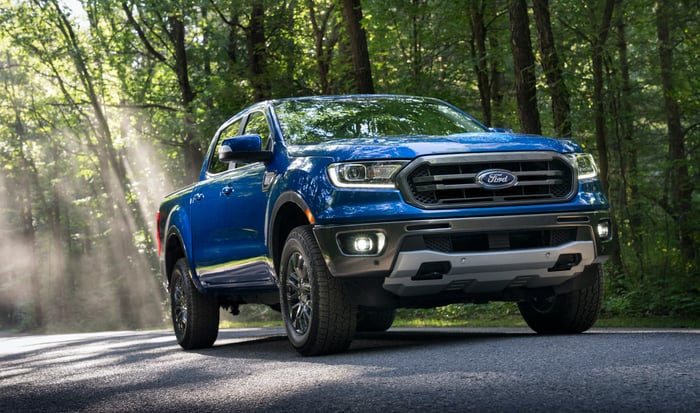 Ford will begin building a VW pickup based on its Ranger in 2022. Image source: Ford Motor Company.

Second, in a presentation to analysts on Wednesday morning, COO Jim Farley confirmed that Ford will launch fully electric versions of its F-150 pickup and Transit commercial van within 24 months. Farley also said that Ford's U.S. factories will be back up to pre-coronavirus levels of production by early July, sooner than some analysts had expected.

Ford's stock has taken a beating in 2020, but things may be starting to look up. The company has new products coming to market as the economy continues to recover. It is set to reveal an all-new version of its most important product, the F-150 pickup, in an online event later this month. The debut of the much-anticipated Bronco SUV will follow soon after in early July, with more products set to launch later this year.