Investors flee the prospect of a reverse share split.

Why is that? As Groupon advised this morning, its Annual Meeting of Stockholders yesterday approved a 1-for-20 reverse share split. In this scenario, investors who owned, say, 1,000 shares of the Groupon stock this morning will end up with just 50 shares when trading resumes tomorrow.

"The reverse stock split will become effective at 5:00 p.m. Eastern time on June 10, 2020," said Groupon. But it appears a lot of investors aren't interested in waiting for the closing bell to ring. They're selling their shares ahead of the reverse split. 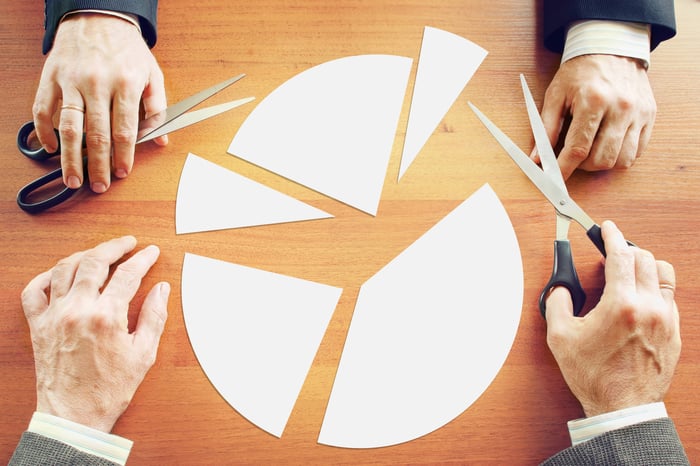 Should you sell, too? Not necessarily. After all, it doesn't really matter that much whether you take two slices of a pie cut four ways or eat half a pie that's sliced right down the middle. The number of "shares" into which Groupon stock splits itself doesn't affect the value of the company a whit.

That being said, the reason Groupon is doing a reverse split may concern you.

Just a few months ago, Groupon stock had sunk into penny stock range, bottoming at just $0.55 per share on March 16 and raising fears the stock might be delisted from the Nasdaq. A reverse split reduces the risk that Groupon will end back up in such dire straits again because shares today that trade for about $1.40 each should cost closer to $28 tomorrow, and thus not fall afoul of Nasdaq's listing requirements.

Then again, Groupon stock hasn't earned a profit in either of the past two years, and isn't expected to be profitable this year or return to profitability any time before 2024 at the earliest, according to analysts polled by S&P Global Market Intelligence.

That fact alone might be a good reason to sell Groupon stock, regardless of how many shares of stock the company is divided into.