Please ensure Javascript is enabled for purposes of website accessibility
Log In Help Join The Motley Fool
Free Article Join Over 1 Million Premium Members And Get More In-Depth Stock Guidance and Research
By Sushree Mohanty – Jun 11, 2020 at 5:30AM

U.S. cannabis companies are certainly catching attention this year. No doubt, they were overlooked while eyes were on the bigger Canadian cannabis players, like Aurora Cannabis (ACB -1.64%) and Canopy Growth (CGC 4.41%). But while the bigger names failed to impress with their downfall the past few quarters, Illinois-based Cresco Labs (CRLBF -9.30%) is emerging as a good cannabis pick for 2020.

Cresco Labs' incredible revenue growth of 215% in the first quarter is a proof of the rising cannabis demand in the U.S. It grew revenue to $66.4 million compared to $21.0 million in the year-ago period.

Sequentially, revenue also rose from $41.4 million in the fourth quarter of fiscal 2019. The company has been reporting revenue growth from the last two quarters while Canadian peers were battling the headwinds. Canada's slow roll-out of legal stores is responsible for pulling down revenue growth for most. Meanwhile, more U.S. states have been working to legalize cannabis.

Among them, Illinois, which legalized recreational cannabis on Jan. 1, has been seeing a drastic rise in sales. It recorded $37.3 million in legal adult weed sales in April, the first month of complete lockdown due to the coronavirus pandemic. 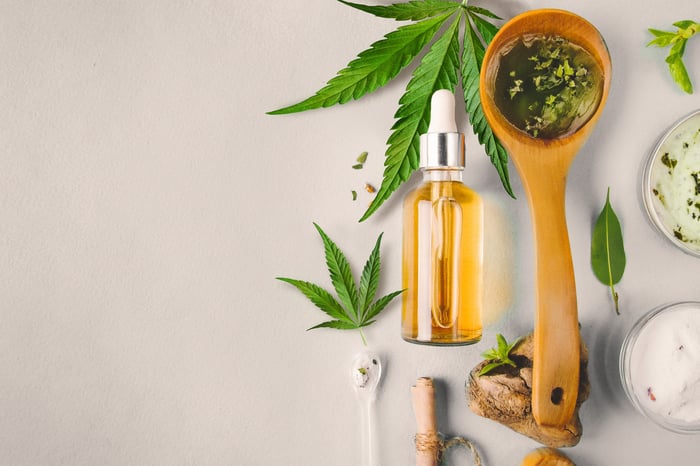 Management sees tremendous potential in the Illinois market, which they think could grow to a $1 billion industry in its first year. Regulatory holdups in Massachusetts and Nevada constricted Cresco's growth in Q1. However, its diversified footprints allowed it to focus and drive growth from other markets where demand was surging. Cresco Labs' revenue growth in Q1 is attributed to three key U.S. markets: Pennsylvania, Illinois, and California.

Not only were its revenue numbers good, but it has been profitable as well. In the first quarter, Cresco Labs reported adjusted earnings before interest, tax, depreciation, and amortization (EBITDA) of $3.2 million, compared to a profit of $2.8 million in the fourth quarter of fiscal 2019 and a loss of $138,000 in the first quarter last year. It's important to note these EBITDA figures are 'net of impact of biological assets,' an important distinction for cannabis stocks. Management expects increased profitability in the upcoming quarter from their growing business in the strong markets. Continued expansion amid the pandemic

Smaller U.S. cannabis companies are on the verge of bankruptcy owing to no access to capital, as marijuana is federally illegal and faces limitations on receiving capital from banks. Meanwhile, Cresco Labs announced an expansion plan in key U.S. markets -- which gives me confidence in its ability to not only stay afloat amid the pandemic but also thrive post-crisis.

Before its Q1 earnings, Cresco announced it will buy four additional Ohio dispensaries through a partnership with Verdant Creation -- making the total five dispensaries in the state. The company saw Ohio's average weekly cannabis sales grow 33% from February to April, which convinced them to expand in the state. It currently has a stellar combined capacity of 215,000 square feet of cultivation space that will allow it to increase its supply to meet rising demand.

In May, it also opened its sixth store in Illinois and its first adult-use dispensary in downtown Chicago.

Hold on to this stock

Cresco being a vertically integrated cannabis company is a plus point. Having control over the supply chain can help a company grow at its desired pace -- which most cannabis companies are struggling with amid the pandemic.

Another priority to survive a crisis is to have a strong balance sheet. Cresco ended the quarter with $68.6 million in cash and cash equivalents.

Given the pandemic and how other businesses are struggling to survive, Cresco Labs had a good start to fiscal 2020. Luckily, if marijuana sales continue at the same pace, we could see higher revenue growth and increased profitability from Cresco this year.

The marijuana sector -- mainly the U.S. cannabis companies -- seems to be in a good place now with a chance to recover and grow. That said, looking for long-term growth from marijuana stocks will need a bit of patience and a stomach for risk.

Cresco Labs Gets Closer to Its Massive Deal With Columbia Care