Grubhub had been in ongoing talks with Uber about a deal but couldn't decide on a break-up fee.

After weeks of haggling with suitors Grubhub (GRUB) has inked an all-stock deal with Europe's Just Eat Takeaway for $7.3 billion.

Under the terms of the deal, Grubhub investors will get $75.15 for each Grubhub share, valuing the deal slightly above $7 billion. The combined company will operate the largest food delivery service in the world outside of China. 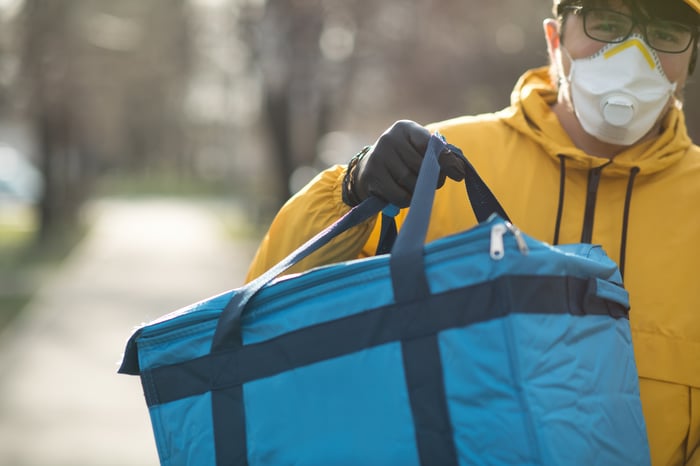 Grubhub CEO Matt Maloney will join the Just Eat Takeway board and will lead operations in North America, which will be headquartered in Chicago, Grubhub's hometown. Two Grubhub directors will also join the combined company's board. Shareholders of both tech stocks still need to sign off on the deal, which both sides expect to close in the first quarter of 2021.

Prior to Grubhub inking a deal with Amsterdam-based Just Eat Takeaway, the meal delivery company was engaged in on-and-off talks with Uber (UBER 0.30%) about a tie-up. The two had been wrestling over the price but a major sticking point was a break-up fee. With lawmakers in the U.S. already criticizing a potential deal, Grubhub wanted Uber to pay the fee. The deal between Grubhub and Just Eat Takeway.com shouldn't raise the ire of regulators, given that only one of the two companies is based in the U.S. A big knock on a Uber/Grubhub tie-up was that two of the three largest players in the U.S. would be combining, potentially stifling competition.

By losing the deal, Uber has to go back to the drawing board and figure out how it can grow that part of its operations. During the pandemic, food delivery was one of the few bright spots, helping it cushion the blow from its core rides business falling off the cliff.  Uber was forced to engage in layoffs as a result of COVID-19, but it has vowed to make investments to diversify and grow its business.