The sector fell on concerns about a second wave of coronavirus infections.

On a down day for the broad market, travel stocks were falling as they responded to a number of negative news items as well as the risk-on/risk-off pattern among investors.

A combination of a sobering forecast from the Federal Reserve, fears of a second wave of coronavirus infections, an unemployment report showing jobless rates remain at historic highs, and a reality check after a few days of market euphoria seemed to push the travel sector and the overall market lower today. 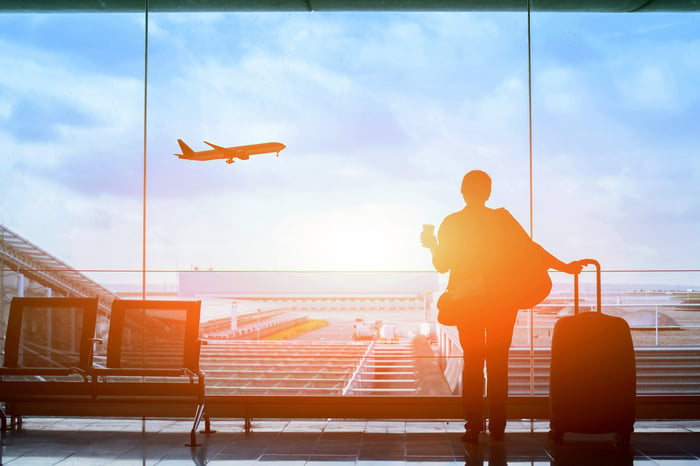 There was no specific news driving this discretionary sector lower. Rather these stocks continued to respond to macroeconomic factors and market sentiment. Travel has been one of the sectors hit hardest by the pandemic, as international travel has essentially ground to halt, business travel is on pause, and vacationers are choosing destinations closer to home.

A number of news items seemed to push stocks lower today. First, the Federal Reserve said yesterday that it would keep benchmark interest rates near zero at least through 2022 to aid the economic recovery. In the explanation for the monetary policy decision, the Fed said, "The ongoing public health crisis will weigh heavily on economic activity, employment, and inflation in the near term, and poses considerable risks to the economic outlook over the medium term." The Fed also forecast that the unemployment rate would be 9.3% at the end of the year and would ease to 6.5% by the end of 2021.

Separately, reports that coronavirus cases are rising in a number of states, including California, Texas, and Florida, the nation's three biggest states by population, have also spooked investors, as another wave of COVID-19 cases would surely be bad news for the travel industry. In Arizona, which has experienced one of the biggest spikes over the last week, hospitals are now preparing for a surge in COVID patients.

Elsewhere, 1.54 million Americans filed for unemployment last week. While that figure is down from prior weeks during the crisis, it's still about double the weekly record from before the pandemic. As of May 30, more than 20.9 million Americans were collecting unemployment insurance, which was down slightly from the prior week, but still represents an unemployment rate of 14.4%. Those numbers show that despite the reopening, the economy is only recovering slowly.

Despite the broader malaise, there have been some signs that the travel industry may be coming back. Airbnb said it saw more nights booked in the U.S. between May 17 and June 3 then it had the year before, showing Americans are interested in "staycations" and trips near their homes and still want to travel. Separately, a report from TripAdvisor said that it sees pent-up demand for travel, as 41% of survey respondents said they expect to take at least as many trips as last year, and restaurants have recovered strongly in countries like Germany, where the local economy has reopened.

Still, the travel industry has a long way to go to make a full recovery, and today's sell-off may reflect that understanding. According to the TSA, airline passengers are still down more than 80% from a year ago, showing that air travel continues to suffer from the pandemic.

As the chart below shows, these stocks had recouped about half their losses from the market bottom in March, but that may now seem overoptimistic, given the economic challenges and the fact that the pandemic is still very much active. 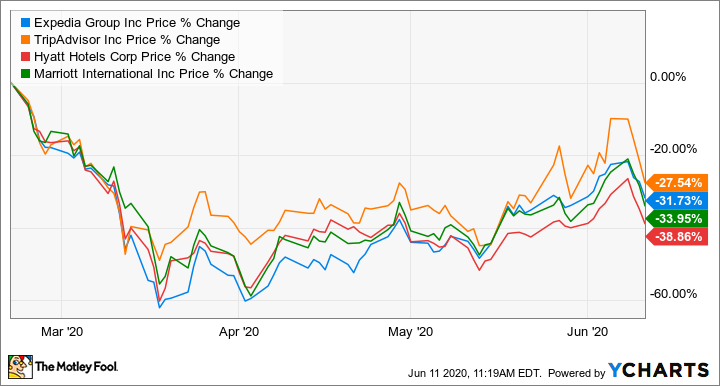 Expect these stocks to fluctuate with the broader market over the coming weeks, as travel demand will serve as a barometer for the broader recovery and the market's sentiment around it.