Please ensure Javascript is enabled for purposes of website accessibility
Log In Help Join The Motley Fool
Free Article Join Over 1 Million Premium Members And Get More In-Depth Stock Guidance and Research
By David Butler – Jun 12, 2020 at 9:25AM

For those with patience, the consumer staple is a still a compelling long-term play.

Kellogg (K -2.60%) is at an inflection point. Cereals are less popular with consumers these days, as are many of its other snacks. In simple terms, the company sells too much junk food.

Last year, it made a move on that front by divesting its Keebler brand, among others, for $1.3 billion. With a new focus on healthier alternatives, Kellogg is trying to find itself in an age when many are paying more attention to what they eat.

To own this stock, you have to be willing to wait for that effort to pay off.

A trail of slow sales

Over the last five years, we've watched Kellogg's top line remain in a perpetual standstill. 2015 revenues were $13.53 billion. Fast forward to 2019 and revenues were $13.58 billion with very little deviation through that period. Given the stagnant top line, there hasn't been much to ignite a fire under the stock. Shares have seriously underperformed over the last several years as investors seemingly grow tired of the brand. 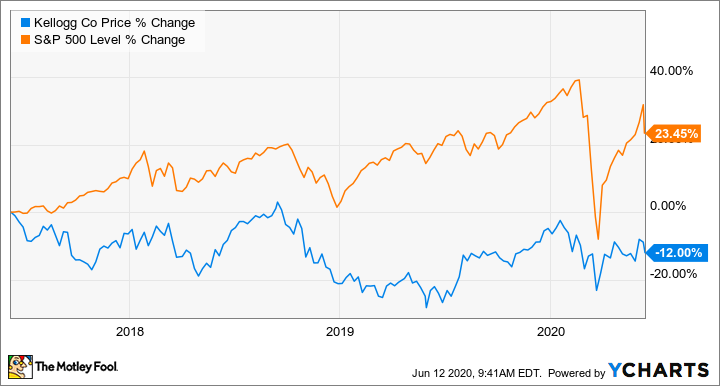 Kellogg has begun venturing into new markets in recent years. In 2017, the company acquired Chicago Bar Company, the maker of RXBARs, protein bars that focus on simple natural ingredients, in a deal valued at $600 million. This added a more nutrition-centric brand to the company's portfolio, and that move paid off as sales of the bar grew to over $200 million in the 12 months following the acquisition. Chicago Bar Company generated just $2 million of sales in 2014.

Since then, Kellogg has used the RX brand to offer breakfast options like RX A.M. Oats as well as TIG Snacks, which are made with ingredients like chickpeas and lentils. All of these efforts fall under an umbrella company called Insurgent Brands.

And this year, we've seen some new life at Kellogg. Fiscal first-quarter GAAP sales were down 3.1% year over year, but that was due to the revenue fallout from the aforementioned divestitures of various brands within cookies, ice cream, and fruit snacks. Excluding those businesses as well as currency fluctuations, the company had net sales growth of 8.0%.

Now, can we trust that growth to continue? It's a toss-up. Kellogg credited more than 50% of that sales jump to consumers stocking up in preparation for sheltering in place. Globally, the company saw sales growth across every region except North America, which was the only market where the food company reported a first-quarter sales decline of 8%. Again, that decrease was due to the lost sales from the divested businesses, so there does seem to be some positive momentum here.

Full-year guidance includes organic sales growth of 1% to 2%. Adjusted earnings per share are expected to decline 3% to 4% on a currency-neutral basis. Growth from the company's new ventures isn't completely offsetting the fallout from legacy brands yet, but it can over time. Is it worth the wait?

Though it probably shouldn't be the largest piece of a portfolio, Kellogg does seem to be finding its legs in a world of rapidly evolving consumer tastes and preferences. The stock also offers a generous 3.6% dividend as of this writing. The payout ratio of 75% for the trailing 12-month period is a bit high, but the stock trades at less than 17 times forward earnings estimates -- not bad for the industry.

Overall, Kellogg is still a leading consumer staples giant with much-loved brands such as Pringles and Frosted Flakes, brands the company can lean on as it develops momentum for its newer ventures. In a volatile market and uncertain economy, I like the stability this stock offers.