Please ensure Javascript is enabled for purposes of website accessibility
Log In Help Join The Motley Fool
Free Article Join Over 1 Million Premium Members And Get More In-Depth Stock Guidance and Research
By Beth McKenna – Jun 13, 2020 at 10:47AM

This "coronavirus stock" has been a huge winner since its 2015 initial public offering.

Teladoc Health (TDOC -3.54%) stock has been a fantastic investment for those who bought it at its initial public offering (IPO) in July 2015 and have held on to it.

So, just how great an investment has the world's telehealth leader been? 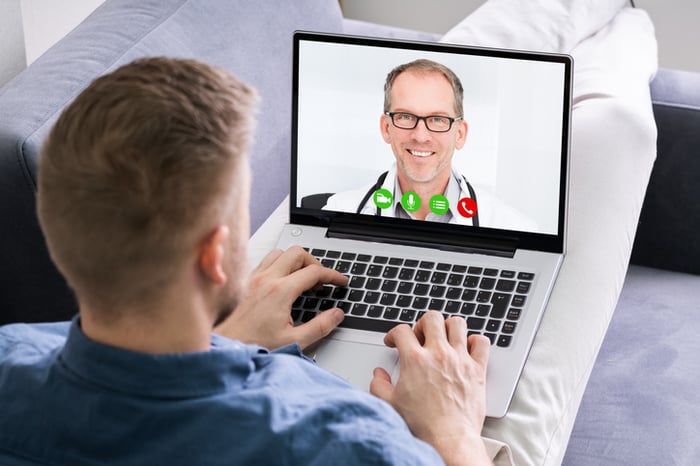 A sizzling start on the New York Stock Exchange

On July 1, 2015, the weather in the Big Apple was comfortable, reaching a high of just 81 degrees Fahrenheit, but inside the city's iconic stock exchange, systems were registering sizzling demand for Teladoc stock, which debuted that day.

The underwriters had reason to believe that demand would be strong, so they priced shares at $19, which was above the recent target price range of $15 to $17. That wasn't high enough though, as shares opened trading at $29.90 -- a whopping 57% above the IPO price.

Every dollar invested in Teladoc stock at its IPO price has turned into about $9.14, as of the market close on June 11. Here's how much various dollar amounts invested at the IPO would now be worth.

Data as of June 11, 2020. All values except for the current price of one share (row No.1) are rounded to the nearest dollar.

So, the answer to the headline question of how much money you'd have now if you invested $10,000 in Teladoc's IPO is $91,437! This assumes that you bought at the $19 IPO price -- an unrealistic assumption for most folks.

The second column above provides a more realistic look at how much money you'd have now. It assumes you bought the stock at the average trading price on the IPO day, or $29.86. Your 10 grand would now be worth more than $58,000 -- still a terrific gain in just under five years. 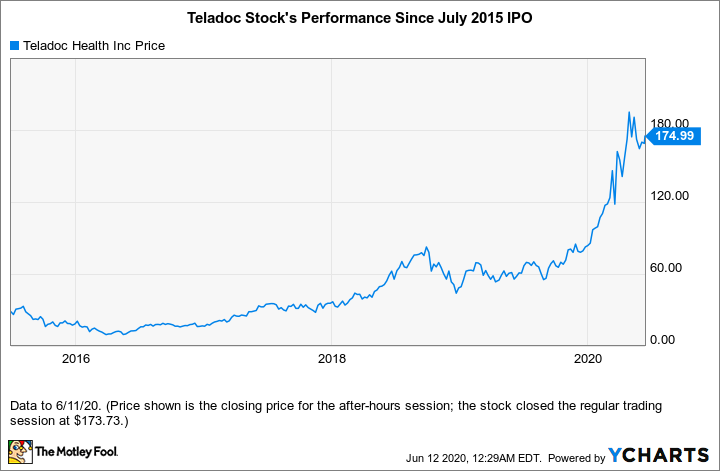 Of course, the biggest catalyst for Teladoc stock's robust performance both recently and since its IPO is the COVID-19 pandemic. In 2020, shares have soared 108% through June 11, while the S&P 500, including dividends, is down 6.2% over this period.

That said, Teladoc stock was also performing well -- though not nearly as well -- before the pandemic because the shift from "visiting" healthcare providers via telephone or video chat rather than in-person had been gaining steam. Shares were up about 341% from the IPO price to the end of 2019, while the broader market returned about 72% over this period.

Since mid-March, when shelter-in-place orders were instituted across much of the globe, demand for virtual healthcare visits has surged. In the first quarter, Teladoc experienced a 92% increase in total visits on its platform and a 61% rise in U.S. paid memberships. These growth drivers boosted revenue by 41% year over year to $180.8 million. Net loss per share narrowed 7% to $0.40.

Teladoc has plenty of room for growth to keep its stock price rising over the long term. It estimates that its total addressable market (TAM) is at least $40 billion to $50 billion. That includes $25 billion to $30 billion in the U.S. and at least $15 billion to $20 billion internationally.

Naturally, Teladoc doesn't have such an attractive growth space to itself, and new competitors will surely continue to enter the company's turf.

Teladoc's solid head start and status as the industry leader (the company was founded in 2002) should enable it to continue to capture more than its fair share of the industry's overall growth. That said, as with any investment, current leadership position is no guarantee of long-term success. So investors should keep current on the competitive landscape.