Please ensure Javascript is enabled for purposes of website accessibility
Log In Help Join The Motley Fool
Free Article Join Over 1 Million Premium Members And Get More In-Depth Stock Guidance and Research
By Bram Berkowitz – Jun 13, 2020 at 11:18AM

The coronavirus pandemic is changing how segments like office and retail space will be used in the future, which could mess with overall demand.

Recessions and financial crises often have a way of changing the banking landscape as a result of deal making and new regulation. But they can also impact the way banks lend. For instance, following the Great Recession in 2008, banks focused a lot less on residential mortgages, historically their bread and butter, because of wide-scale issues that arose in the housing market. A long period of low interest rates that was intended to jump-start the economy made the yield on residential mortgages much less attractive. Collectively, outstanding residential (single-family) mortgage volume at U.S. Banks went from $2.7 trillion in 2006 to $2.5 trillion at the end of 2019, according to the FDIC

In that same period, commercial real estate (CRE) loan volume grew from $886 billion to $1.5 trillion. So there are a lot CRE loans that have really not been stress tested in a recession, let alone during an event like the coronavirus. A CRE loan is typically made to a borrower or company for securing a property for its business. Examples include buying a storefront for a retailer, an office building for a company, a large building for a hotel or a apartment building that houses more than four units. While I do think restaurants and hotels will rebound from the coronavirus pandemic, other types of commercial real estate will never be the same as a result of digital and remote trends that have accelerated during the coronavirus. 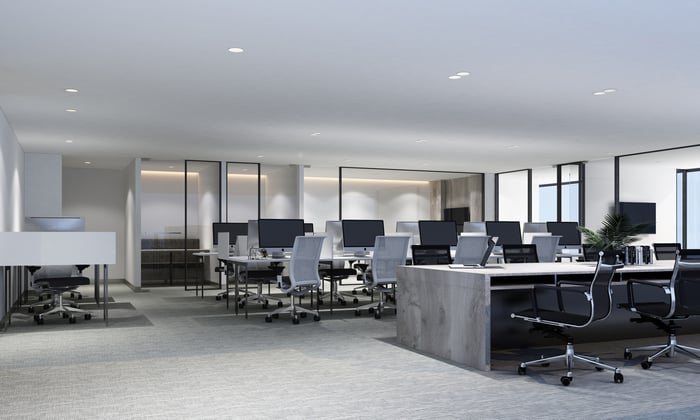 One sector within CRE that looks like it could be permanently disrupted is office space. In an apparently huge shock to the business community, workers who spend all day on their computers making phone calls can actually accomplish that same work from the comfort of their home or at a coffee shop (shocking, I know). The coronavirus provided the ultimate proof that employees can work at home and remain productive. This has led many companies to begin to rethink the amount of physical space they need.

"I do worry about the demand for office space in the large cities in this country as their leases come up. Rather than needing 200,000 square feet, maybe they only need 150,000 square feet because they are going to allow their workforce the opportunity to work from the house two days a week versus five days per week in the office," said Gerard Cassidy, managing director of equity research at RBC Capital Markets, on The Kafafian Group's bank podcast.

This change is already taking place at tech giants like Twitter (TWTR -1.18%) and Facebook (META -3.67%), which have said that a large portion of their work force will likely be remote after the coronavirus. Additionally, a recent survey conducted by the research firm Gartner discovered that nearly three quarters of 317 CFOs and finance leaders surveyed in March plan to move at least 5% of their employees normally working in the office to permanently remote positions post coronavirus. Another survey conducted in late April by the corporate real estate association CoreNet Global showed that 69% of the association's corporate real estate members expect their company to downsize their office footprint after working remotely during the pandemic. A month earlier, that number was 51%. Cassidy sees the office space industry structurally changing within the next three to five years, something that no one would have predicted before the coronavirus.

This could be an issue for existing loans in the office space. If the demand for office space significantly declines, then the value of office buildings could also decline. In this case, borrowers may not want to pay their monthly mortgages because they are now making the same high monthly payment but getting less equity on the property, a scenario that typically results in a loss on their investment. If this happens, or the owner of an office building defaults on the loan, the normal course of action for a bank is to come in and foreclose on the property, and then sell that building as fast as possible to recoup what's left on the loan. But if the value of the building drops enough, the sale of the building may not be able to make up the difference on what's left on the loan. A similar conundrum occurred during the Great Recession, when the value of homes nationwide fell significantly.

It's not just office space that could be impacted. After all, if people can work anywhere, do they need to be paying the expensive rent and home prices in Boston, New York City, Los Angeles, and San Francisco? That could have an impact on the demand for multi-family loans in cities, which are used to purchase apartment buildings or complexes with more than four units that might be rented or sold. According to the FDIC, multi-family loan volume at all U.S. banks went from $193 billion in 2006 to $458 billion at the end of 2019.

Prior to the pandemic, many banks were also staying away from loans to retailers, but this CRE segment could be in even more trouble once the pandemic subsides. U.S. retail sales are projected to decline by 10.5% in 2020, according to eMarketer, while e-commerce sales have jumped 18% this year already Does that look like a trend that is going to reverse back to normal? Retailers in the U.S. could close 20,000 to 25,000 stores this year, according to Coresight Research. More than half of those could be in malls. Historic department stores with huge brand recognition like Neiman Marcus and J.C. Penney (JCPN.Q) have filed for bankruptcy.

While digital and remote trends have accelerated, I still think they are at an extreme scenario right now. People are not going to want to live their entire lives inside their homes. A more likely scenario on the office space front is that companies provide a smaller and more cohesive space. Cassidy said he could see a lot of offices losing their cubicles and individual offices and just becoming open spaces where anyone can plug in. I personally think there will be a lot more co-working spaces and different companies sharing space to save on costs. So, CRE may not fall off a cliff like the housing market did in 2008, but it is likely to change.