Walmart will drive third-party e-commerce sales via a partnership with Shopify, and 3M saw broad sales declines during May.

The Dow Jones Industrial Average (^DJI 2.03%) started the week on the wrong foot, extending last week's decline. The Dow was down about 1.4% at 11:55 a.m. EDT Monday. While there was no clear driver of the decline, rising fears of a surge in COVID-19 cases could be contributing.

Shares of Walmart (WMT 1.58%) and 3M (MMM 1.82%) were able to rise on Monday despite the market's poor performance. Walmart announced a new partnership with Shopify which will increase the assortment on the retailer's website, while 3M reported a double-digit sales decline for May. 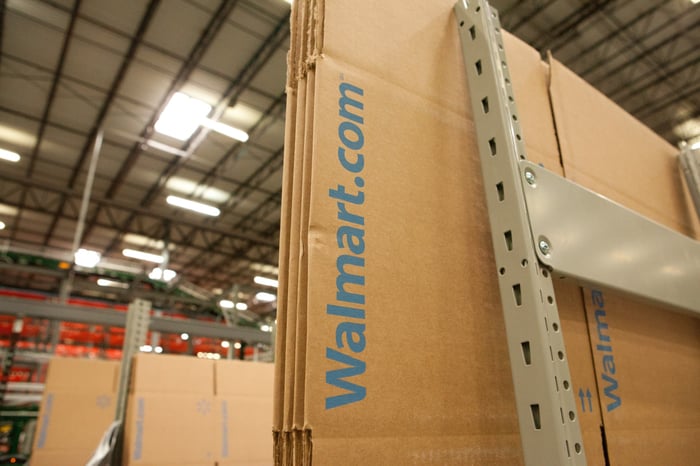 Walmart teams up with Shopify

While e-commerce giant Amazon.com has come to rely on third-party sellers to generate around half of its unit sales, Walmart has been slower to lean on that model. The mega-retailer does have its own third-party business, Walmart Marketplace, which allows sellers to tap into Walmart's web traffic. But Walmart Marketplace has just 45,000 sellers, according to data from Marketplace Pulse, compared to 2.1 million active sellers on Amazon.

The Shopify integration will allow Shopify sellers to list items on Walmart.com. Walmart will initially focus on adding U.S.-based small and medium-sized businesses that sell items that complement its existing assortment. The retailer hopes to add 1,200 Shopify sellers this year.

This move will provide more sellers with a viable alternative to selling on Amazon, and it will increase the assortment of items available on Walmart.com. The company views growing the Marketplace as a strategic priority, but it will continue to be selective about the sellers it allows on its website.

Walmart stock was up 0.2% by late Monday morning, outperforming the broader market.

Shares of 3M were up about 0.5% by late morning despite a May sales report that left a lot to be desired. Overall sales tumbled 20% on a year-over-year basis, with declines across all of the company's segments.

The picture didn't look any better geographically. Sales were down 15% in Asia Pacific, down 21% in the Americas, and down 26% in Europe, Middle East, and Africa. On an organic local-currency basis, sales in China were down 6%, sales in Japan were down 18%, and sales in the U.S. were down 22%.

While 3M stock shook off the rough sales report on Monday, shares remain down about 17% from their 52-week high.