Please ensure Javascript is enabled for purposes of website accessibility
Log In Help Join The Motley Fool
Free Article Join Over 1 Million Premium Members And Get More In-Depth Stock Guidance and Research
By Bram Berkowitz – Updated Jun 15, 2020 at 10:49AM

The company leverages artificial intelligence and affordability to provide homeowners and renters insurance to millennials.

Lemonade (NYSE: LMND), an insurtech company that uses artificial intelligence to sell insurance to a largely younger crowd, has recently filed to go public with the Securities and Exchange Commission. The company said in its filing that it is targeting a $100 million capital raise. According to the company's filing, the number of outstanding common shares after the IPO is based on roughly 43.9 million shares of the company's common stock outstanding as of March 31, which includes roughly 31.6 million shares of preferred stock that will automatically convert into common stock.

Prior to filing for an IPO, Lemonade was an up-and-coming startup based in New York that had attracted lots of capital from the private markets, including venture investors Softbank and General Catalyst. Going into the IPO, venture capitalists projected the company to be valued at more than $2 billion. Lemonade said it plans to use proceeds from the IPO for general corporate purposes, but also said it may use the capital to make an acquisition, or invest in other businesses, products, and services. Here's more about Lemonade. 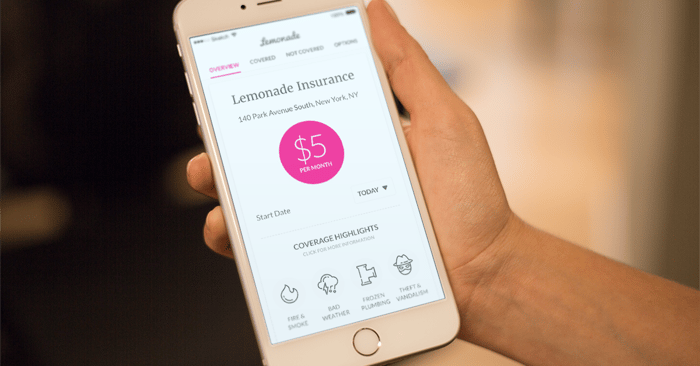 Insurance as a subscription

At its core, Lemonade provides renters and homeowners insurance in the U.S., as well as select insurance products in Germany and the Netherlands. The standard renter pays a premium of nearly $150 annually, with the standard homeowner paying about $900 annually. Taking advantage of a popular business model, Lemonade allows customers to purchase insurance products as a subscription, starting for as little as $5 per month.

Lemonade is not just an insurance company, but also a public benefit corporation, meaning it is legally required to consider the social impact of its decisions on its stakeholders. As a result, Lemonade donates leftover funds from the premiums it collects to nonprofits selected by its customers. This may sound altruistic, but Lemonade believes it also discourages customers from embellishing claims, because every time they do, there is less money that can be donated.

Being an insurtech company, Lemonade leverages artificial intelligence (AI) to help its younger millennial customers make quick decisions. Bank of America may have Erica, its virtual financial assistant, but Lemonade has AI Maya, which helps onboard customers by collecting information, setting up customized coverage, creating insurance quotes, and handling secure payments. Lemonade claims that it only takes AI Maya two minutes to get customers set up with renters or homeowners insurance. Then Lemonade uses AI Jim to pay out insurance claims in as little as three seconds.

Lemonade claims that it will be much less volatile than other insurance companies because gross margins will be stable even in years when there are more claims. The company achieves this using a fixed-fee model. Lemonade transfers 75% of all its premiums to reinsurers, companies that provides financial protection to insurance companies (insurance for insurance companies). As a result, the reinsurers give Lemonade a commission of 25% for every dollar transferred to reinsurers, in addition to funding the claims ceded to them. That's money in the bank for Lemonade, which the company says will make it less sensitive to how claims come in during a given year.

A different approach for younger customers

Lemonade focuses on a young demographic, with roughly 70% of the its current customers under age 35. Roughly 90% of Lemonade's customers said they didn't switch from another insurance carrier, suggesting these could be first-time insurance buyers.

Getting millennials to purchase insurance is no small feat -- just ask healthcare insurers. Lemonade has been able to lure the younger crowd by using the savings it realizes from technology and offering premiums that can be 50% cheaper than its competitors. Customers have taken notice.

Lemonade cites a massive untapped market for its growth potential. Global property, casualty, and life insurance are a $5 trillion market, and these insurance categories make up 11% of U.S. GDP. The company says geographic expansion can also help it scale.

Net losses are surging -- but so is revenue

Lemonade is hitting the public markets after reporting a net loss of more than $108 million in 2019, up from a net loss of $53 million in 2018. The company says its fixed-fee model is partly to blame because it reduces volatility but does not maximize profitability. "Optimizing for profitability is important, but can wait," Lemonade said in its prospectus. "We aim to first grow fast and capture as much market share, mind share, and as large a geographical footprint as possible."

Still, not all is bad. Despite the losses, the company tripled revenue from 2018 to 2019, while only roughly doubling its spending on marketing and sales in that same period.

The company did spend $89 million alone on sales and marketing in 2019, more than the $67 million in revenue it made. But it believes that the lifetime value of its customers is much higher than the cost of acquiring them. Lemonade has a good track record of retaining customers, keeping 75% of year-one customers and 76% of year-two customers.

Great prospects, but not without risk

I really like some of the fundamentals behind this business, and I think insurance is a huge market with plenty of room for disruption. I could no doubt see this business being successful. However, one thing to keep in mind is that Lemonade is your classic tech start-up with tons of venture backing, big name investors, a huge valuation, and not a dollar of profit. In these bumpy markets, start-ups are more risky now than ever before. If you can afford the risk and are patient, go ahead and invest.