Please ensure Javascript is enabled for purposes of website accessibility
Log In Help Join The Motley Fool
Free Article Join Over 1 Million Premium Members And Get More In-Depth Stock Guidance and Research
By Rich Duprey – Jun 15, 2020 at 10:55AM

The COVID-19 pandemic may have changed how people think about schooling.

Few companies have performed as well as Chegg (CHGG 7.39%) during the COVID-19 pandemic, as the potential for and necessity of online education became apparent. Its stock didn't fall very far at the outset and shares have more than doubled since, but investors should hold off on jumping into this hot stock.

The pandemic has likely been a transformational event for digital education, but there are variables that still need to be sorted out. Chegg has come very far, very fast and the near term carries downside risk, even if the long-term looks bright. 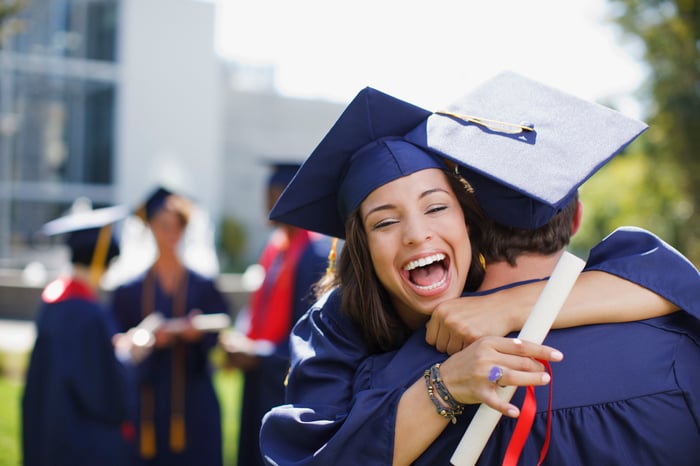 Ready for a change

Higher education is in need of an overhaul, not least because of the cost involved in getting a college degree. Student loan debt stands at $1.6 trillion and is second to only mortgage debt in weighing down American consumers, but the sheepskin that graduates receive isn't nearly as valuable as it once was and will take a lifetime for many students to pay off.

The shutting down of educational institutions during the crisis showed how distance learning can change the system, and this might be the first stages of what becomes a structural shift that benefits Chegg, which provides tutoring, work skills, and more.

Many people first learned of Chegg when they rented textbooks to do an end run around another exorbitantly overpriced portion of higher education, but the company is now making its mark with direct-to-student learning.

Chegg's textbook rentals began in 2007, but it has since transitioned to offering a full suite of services mostly for college students, but also high school students, and even a few middle school offerings, too.

The COVID-19 pandemic forced millions of students at all levels to adapt to a new, alternative way of receiving an education. With in-person, one-on-one assistance shuttered along with school, Chegg was one of those services that enabled students to adapt to this new reality, one that could continue long after this crisis passes.

Graduating to the next level

While that's a remarkable increase on its own, the fact is that students were already moving toward virtual learning through Chegg in greater numbers before schools were required to change over to online education.

Chegg said subscriber growth was up 33% for the first two months of the quarter and accelerated from those levels in the middle of March, coinciding with COVID-19 being declared a pandemic and businesses and institutions being forced to shut down. It now expects second-quarter subscriber growth to exceed 45%, with a similar percentage increase in revenue to as much as $137 million.

Adjusted earnings before interest, taxes, depreciation, and amortization (EBITDA) is also forecast to leap forward, coming in between $40 million and $48 million, a 50% to 57% increase over the year-ago period.

Like many businesses, it is not comfortable looking too far out into the future because of the pandemic, so it has not provided full-year guidance.

Chegg's stock hit a 52-week low of just under $26 a share in March and has soared 126% since then as investors caught on to the potential for this virtual teaching assistant. While shares have eased back from the highs they hit following its earnings report, they remain elevated. That's why, although Chegg looks like a great long-term pick, it might not be the best investment now.

The high cost of higher ed

There remains a lot of uncertainty about how fall semester classes will be held, whether students will be allowed to enroll and return to class in person beginning in September. As much as a transformation is necessary for higher education, it won't happen overnight. The economy's return to normalcy could be signal of a resumption of the established ways for schooling, too.

That doesn't mean Chegg won't still grow. The company continues to expand its offerings to new students at earlier stages of education, such as middle school and even elementary school, while expanding internationally.

Analysts forecast Chegg will grow earnings 25% annually, but the stock trades at over 40 times estimated profits for the coming year. And though free cash flow jumped to $8 million in the first quarter from $3.9 million last year, the stock goes for over 65 times FCF, an exceptionally high valuation.

Chegg remains a good, long-term stock pick that will benefit from changes that are desperately needed to break the cycle of high-cost education, but not at just any price. Chegg doesn't deserve to go to the head of the class just yet.