Please ensure Javascript is enabled for purposes of website accessibility
Log In Help Join The Motley Fool
Free Article Join Over 1 Million Premium Members And Get More In-Depth Stock Guidance and Research
By Will Healy - Jun 16, 2020 at 12:29PM

When people look back on how businesses fared during the COVID-19 pandemic, many may see Best Buy (BBY 4.41%) as one of the relative surprises. Despite its stores remaining largely closed since late March, the company escaped the quarter with a relatively modest drop in revenue.

Now, Best Buy is reopening more than 800 of its stores. Some might perceive such an event as a reason to sell a stock. However, as the company transitions back to normal operations, investors have an opportunity to buy a robust retailer at a reasonable price.

Best Buy during the pandemic

Best Buy switched to a "curbside-only" operating model on March 22. This allowed customers to pick up online orders and receive deliveries of large items when local regulations permitted. At that time, it also suspended in-home installations and repairs. Those resumed on April 27 following strict guidelines. 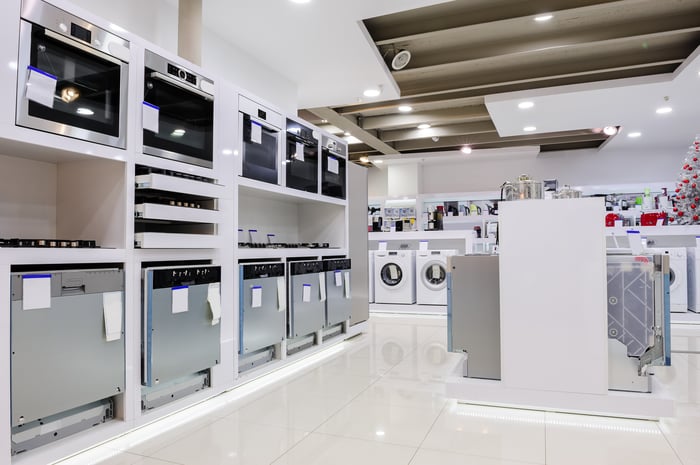 This strategy allowed Best Buy to avoid the massive revenue drop that hit other retailers deemed "non-essential." Best Buy retained about 81% of its sales level during the six-week portion of the quarter when it limited sales to online ordering and curbside service.

Consequently, enterprise revenue fell by only 6.3% on a year-over-year basis. The company also earned $0.67 per share in non-GAAP income during the previous quarter. While that was a significant drop from the $1.02 per share earned in the same quarter last year, it allowed the company to remain profitable.

The time under quarantine shows that this company can prosper under harsh conditions. It has also managed to succeed despite competition from Amazon and e-commerce in general. Additionally, like Walmart, it has turned its combined online and physical store presence into a competitive advantage.

Investors should remember that Best Buy sells a lot of large items that some consumers may not want to buy online. With something such as a large television or a refrigerator, many customers want to see and touch the merchandise in person before committing to a purchase. With its omnichannel presence, Best Buy is better-positioned than Amazon to deliver such service.

Like most companies, this retail stock dropped dramatically in late February and early March. While Best Buy staged a partial recovery, the current price of just under $78 per share is almost 15.5% below the 52-week high of $91.99 per share. 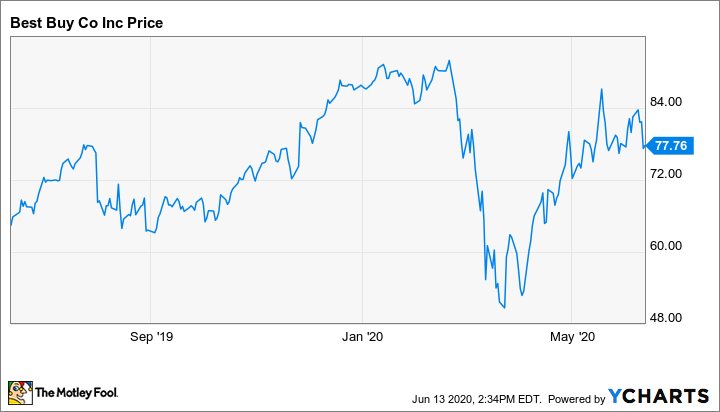 However, with a current P/E ratio of just under 14.5, it trades at a reasonable valuation. Best Buy's multiple also comes in well below other retailers in the electronics space such as Amazon and Walmart.

Despite a predicted 16% drop in earnings this year, analysts expect net income will rise by an average of 7.9% per year over the next five years as the company resumes its growth. That forecast of an 18% earnings increase for next year also indicates the next fiscal year will bring about a relatively quick recovery and a return to pre-pandemic growth patterns.

Investors are also on track to receive an annual dividend of $2.20 per share for this year. This amounts to a yield of just under 2.8%. Moreover, the payout has risen every year since 2014 and has trended upward since quarterly payouts began in 2004. The dividend payout ratio, or percentage of net income devoted to the dividend, stands at about 38.1%. Consequently, the pandemic appears to have presented no danger to the payout.

Best Buy has not come out of the pandemic unscathed. Still, the last few months have shown how well the company can perform during a shutdown. With a relatively low multiple and a comparatively high dividend yield, Best Buy appears poised to continue delivering returns as the company resumes normal operations. Instead of selling the stock amid the store reopenings, it may become a time to take advantage of a good buy on Best Buy.