Please ensure Javascript is enabled for purposes of website accessibility
Log In Help Join The Motley Fool
Free Article Join Over 1 Million Premium Members And Get More In-Depth Stock Guidance and Research
By Zhiyuan Sun – Jun 17, 2020 at 7:25AM

Here's why this leader in treating progressive non-viral liver disease is, in fact, a solid buy.

Treating nonalcoholic steatohepatitis (NASH), or metabolic liver disorders, is an area of significant interest for biotechnology companies. Indeed, the global prevalence of NASH is estimated at between 1.5% and 6.5% of the population. In the U.S., this number is even higher, with 3% to 12% of adults being affected by the condition, amounting to 8 million to 30 million people.

Due to this high prevalence, the total addressable market worldwide for treating NASH is estimated to be north of $35 billion. Let's look at one company that is making headlines in the NASH treatment market: Intercept Pharmaceuticals (ICPT -14.99%) 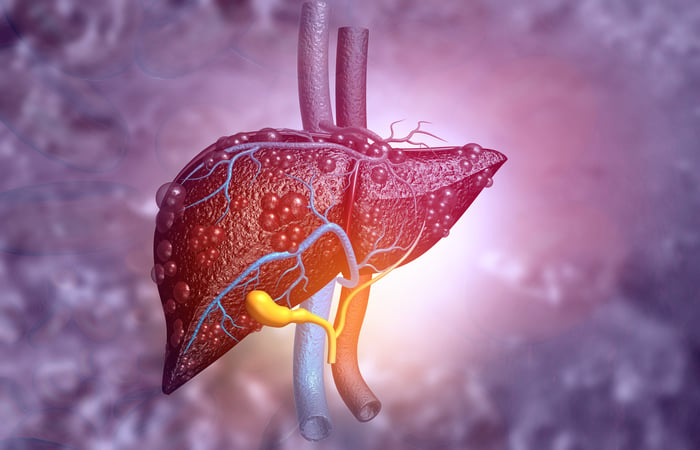 The company is already marketing a drug called Ocaliva for treating primary biliary cholangitis (PBC), an autoimmune disease that causes progressive destruction of the bile ducts in the liver. The drug can alleviate symptoms of PBC in approximately 50% of patients. In the first quarter of 2020, Ocaliva's revenue grew by 40% year over year to $72.7 million.

At an annualized rate, Ocaliva is on track to recognize close to $300 million in revenue. That's a massive increase from last year's $178 million. With a market cap of $2.55 billion, Intercept is trading at a price-to-sales ratio of less than 9, which isn't a lot. Meanwhile, the company is guiding for net losses between $560 million and $600 million. It is evident that investors are willing to endure the losses for the significant potential in its core NASH pipeline.

As it turns out, the active pharmaceutical ingredient in Ocaliva, obeticholic acid (OCA), has a wide variety of therapeutic applications. OCA is theorized to modulate a nuclear receptor that regulates bile acid levels in the liver, thereby controlling or reducing NASH symptoms.

Last December, the company published phase 3 studies using OCA to treat advanced fibrosis due to NASH, a condition affecting a total of 500,000 patients in the U.S. In this investigation, 23.1% of the 931 patients who took OCA exhibited a reduction in liver scarring with no worsening of NASH symptoms. This response rate almost doubles that of placebo.

The results were excellent, considering there are limited options for patients with NASH. In fact, the current first line of treatment for the condition is weight loss. The company is expecting OCA to be approved by the U.S. Food and Drug Administration. A panel of experts from the agency will vote on the company's findings with a Prescription Drug User Fee Act (PDUFA) action date of June 26.

I think it is highly likely the drug will obtain approval from the FDA due to its ability to tackle an unmet medical need and the statistical significance in its phase 3 results. Meanwhile, the company is also testing OCA for treatment of NASH and PBC in over 4,000 patients at 400 sites around the world. These investigations are currently between phase 2 and phase 4 and should show results by the end of next year.

Intercept's financial health is sound. The company has more than $553 million in cash and investments, compared with $539 million in long-term debt. Despite a substantial net loss, it is focusing heavily on research and development spending, investing about three-quarters of its revenue (or $56.7 million per quarter) into such initiatives.

Overall, I think Intercept is a solid choice for biotech investors interested in exposure to NASH treatments. It is a solid buy in anticipation of a positive PDUFA later this month with regard to using OCA to treat advanced fibrosis.