Please ensure Javascript is enabled for purposes of website accessibility
Log In Help Join The Motley Fool
Free Article Join Over 1 Million Premium Members And Get More In-Depth Stock Guidance and Research
By Sushree Mohanty – Jun 18, 2020 at 6:32AM

After a string of bad news, HEXO’s third-quarter results came as a wee bit of a surprise.

Not many had high hopes for HEXO's (HEXO -3.02%) third-quarter results, as the cannabis company's earnings had time and again disappointed investors. But rising marijuana sales led by the pandemic helped the company announce better numbers in its fiscal 2020 third-quarter report, released June 11.

Does all look good behind the numbers? Is the stock finally a buy? Perhaps -- but first, let me tell you the two positives I noticed in the Q3 results. 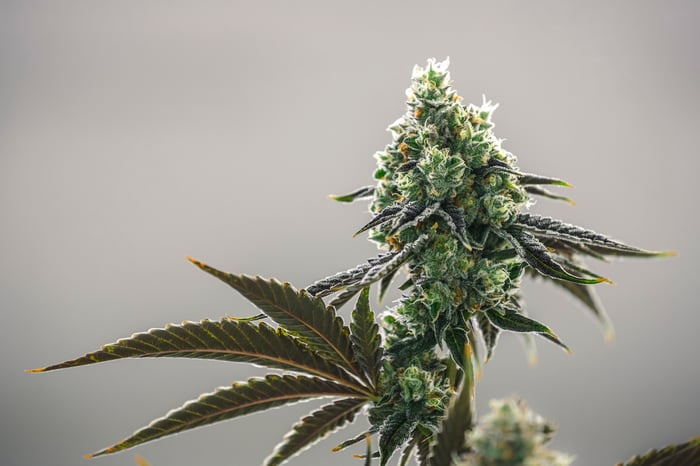 Management said sales of its value brand, Original Stash, and some newly launched hash and oil extract drops drove the overall revenue numbers. Recreational cannabis volume also saw an increase of 42%, to 9,338 kilograms, from the 6,579 kilograms sold in Q2 2020. HEXO has repeatedly missed analysts' revenue estimates and its own forecasts for the past few quarters -- so third-quarter revenue coming in higher than estimated was definitely a piece of positive news.

HEXO's third-quarter results come at a time when most cannabis companies have reported good quarterly numbers. So the expectations were high, which led to the strong surge in its stock price before earnings.

Revenue has risen lately for most pot companies, but very few have been able to achieve positive earnings before interest, taxes, depreciation, and amortization (EBITDA). HEXO again reported an EBITDA loss in the third quarter, this time totaling CA$4.3 million. However, that was an improvement from CA$8.5 million in both the year-ago period and the second quarter. Two factors contributed to the improvement in EBITDA. First, operating expenses fell sharply, to CA$26.8 million from CA$281.5 million in Q2 2020. Second, general and administrative (G&A) expenses also fell, to CA$11.2 million from CA$14.5 million in Q2 2020.

Management has assured investors that the company will achieve positive EBITDA by the first half of fiscal 2021. Meanwhile, Aphria (APHA) is the only pot company in the Canadian space to have consistently reported positive EBITDA -- which is why it is my favorite cannabis pick for 2020.

But here's the twist!

Whether management really does hit its first-half goals will depend on how COVID-19 affects its operations, the pace of rollouts of retail stores in Ontario and Quebec, and customer demand. The latter is high now for recreational cannabis, thanks to the pandemic -- but it's doubtful the pace will be the same when the coronavirus subsides.

To fight illicit pot sales, the Ontario government had planned to issue 75 retail store licenses by September 2021. The first phase would have had the province issue 20 new cannabis store authorizations in April 2020. But then the pandemic hit, putting a pause button on this plan. The province did decide to resume issuing new cannabis store authorizations later in April. But while it's Canada's most populous province, Ontario lags its peers with just 60 stores -- while Alberta and British Columbia have opened 181 and 446 stores, respectively.

The rollout of stores in Ontario and Quebec will determine HEXO's ability to recover from its losses and be profitable. I'm concerned by HEXO's limited access to markets -- most of its business is in the Canadian provinces. Meanwhile, Cronos Group (CRON -5.18%) is expanding in the Israel medical pot market, while Aphria is strengthening its footing in the German medical cannabis space.

Given the COVID-19 situation, expecting HEXO to hit profitability by the first half of fiscal 2021 looks like a bold move to me. But if marijuana sales do continue at the same pace, things could improve for HEXO and other cannabis companies.

Also, let's not forget about the "Cannabis 2.0" derivatives products legalized in Canada last year -- edibles, beverages, chocolates, vapes, and concentrates, to name a few. Cannabis beverages are a new product format that could drive a large consumer base. HEXO has plans to launch cannabidiol (CBD)-infused beverages in Canada, and it also recently entered the U.S. market with its partnership with Molson Coors Beverage. HEXO ended the quarter with CA$95.3 million in cash, cash equivalents, and short-term investments -- with CA$50 million from additional financing.

The better-than-expected results have definitely contributed to HEXO's stock-price gain of 35% so far in June, while the SPDR S&P 500 ETF has remained basically flat. Over the same time, Cronos and Aphria's shares have fallen by 1.5% and 1%, respectively. 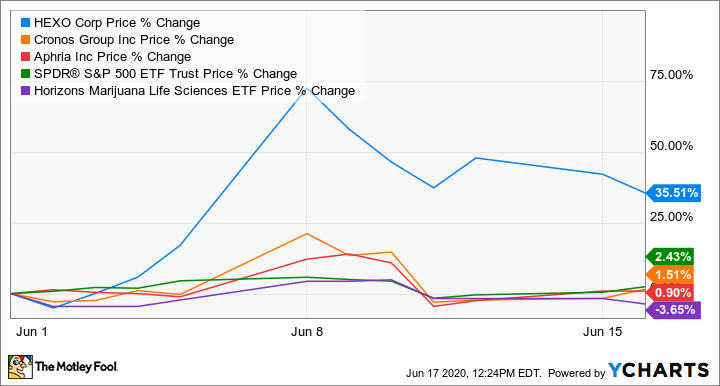 It is vital to note how often a company manages to surpass or at least be in line with its forecasts. HEXO repeatedly missed its guidance last year, making investors skeptical. To gain investors' trust back, it has to show consistently better performance. The marijuana industry has been and will remain a risky sector to invest in. That said, it also is an evolving sector that has tremendous potential, not just in Canada and the U.S. but globally. If HEXO manages to survive the pandemic while reporting better quarterly numbers, there could be hope.