Please ensure Javascript is enabled for purposes of website accessibility
Log In Help Join The Motley Fool
Free Article Join Over 1 Million Premium Members And Get More In-Depth Stock Guidance and Research
By Zhiyuan Sun – Jun 18, 2020 at 7:08AM

One of these pharmaceutical giants has the only reasonably effective treatment so far for COVID-19, while the other has high hopes for its Alzheimer's disease drug candidate.

Investing in blue-chip pharmaceutical stocks can relieve some stress during recessions. For example, shares of Gilead Sciences (GILD -2.19%) closed trading Monday up 13.7% year to date, compared with a 5% decline for the broad-market S&P 500 index. Meanwhile, shares of Biogen (BIIB 1.03%) have declined by about 6% in 2020, but may rebound sharply due to solid business performance.

With Gilead Sciences marketing a newly authorized treatment for COVID-19 and Biogen developing a novel treatment for Alzheimer's disease, investors' expectations for both stocks are high. But which of the two companies is a better buy today? 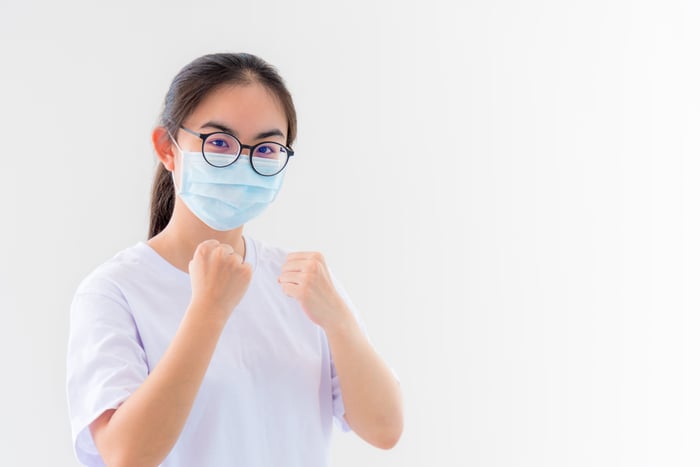 Gilead's core business involves three segments: HIV/AIDS treatment, liver disease treatment, and hematology/oncology products. Its fastest-growing and best-selling drug is Biktarvy, which brought in $1.4 billion in revenue during the first quarter -- up 113% year over year. Biktarvy is a complete regimen for the treatment of HIV-1 infection. In clinical studies, 96.3% of patients who received it achieved viral suppression of HIV symptoms.

Biktarvy won FDA approval in February 2018, and bringing a drug that good to market was just what Gilead needed to drive a stock rally. For years, Gilead's revenue had been on a declining streak; with more and more patients being cured of hepatitis C by new treatments, fewer and fewer were reliant on Gilead's products. Biktarvy was a game-changer: The drug lifted Gilead's overall revenue by 5.1% in Q1 to $5.5 billion.

By contrast, Biogen's drugs chiefly treat neurological disorders, movement disorders, and ophthalmology issues. Its flagship products include Tecfidera and Vumerity, which are derived from fumeric acid -- a common food additive that's generally used to add tartness -- and are used to treat multiple sclerosis. Multiple sclerosis patients who took them in clinical studies saw relapses of their symptoms decrease by 50% compared with placebo. Together, the two drugs brought in $777.5 million in revenue for Biogen in Q1, an increase of 140% year over year.

Unfortunately, Mylan is disputing Biogen's patents covering Tecfidera, which may pave the way for generic competition to launch earlier than the current 2028 patent expiry date. Two court cases are pending that will decide whether Biogen's intellectual property is protected.

The company's revenue has also been flat compared with last year. On this score, Gilead comes out on top thanks to its revenue finally rebounding, as well as a lack of meaningful litigation challenging the patents on its products.

Both of these companies have significant potential catalysts on the immediate horizon that could send their shares higher. First up is Gilead's remdesivir, a nucleotide analog that inhibits the RNA replication process of SARS-CoV-2, thereby reducing the severity of COVID-19 cases. After remdesivir was shown to improve COVID-19 patients' recovery time by 32% in phase 3 clinical trials, the drug received emergency use authorization from the Food and Drug Administration.

While lockdowns and quarantines have been in place across most of the U.S. since March, President Trump has largely favored ending these measures and rebooting the American economy as quickly as possible. As a result, the curve of infections is not significantly flattening here, despite major declines in states that were early hot spots of the pandemic.

With more than 2.1 million Americans already infected, over 116,000 dead, and rising case counts in a large percentage of U.S. states, I believe Gilead can still profit by supplying remdesivir -- thus far one of the two only proven effective COVID-19 treatments. However, investors should be on the lookout as to whether or not dexamethasone it is able to best the efficacy of remdesivir. The generic recently demonstrated a 20% to 33% life-saving benefit when given to patients with severe cases of COVID-18 during its clinical investigation -- the first drug thus far to do so. In phase 3 studies, remdesivir demonstrated a 40% relative survival benefit compared to patients who were not given the drug, but the difference was not statistically significant.

While Gilead is busy tackling the COVID-19 crisis, Biogen is turning its attention to combating Alzheimer's disease, which affects more than 5.5 million people in the U.S. It has been 17 years since the last drug to treat Alzheimer's was approved, none of the approved treatments are very effective, and there is no cure.

But there are high hopes for Biogen's experimental therapy, aducanumab. The drug reduces the amount of beta-amyloid proteins that accumulate in the brain, where it is theorized that they hamper cognitive function. Unfortunately, aducanumab's path to success is severely hindered by the fact that it failed a phase 3 clinical trial; patients who took the drug showed no cognitive improvement after treatment. In a second trial, only a small cohort of patients who received the highest dose of the drug demonstrated a statistically significant 27% improvement in cognition. The company is seeking commercialization approval based on the post-hoc analysis of aducanumab's clinical trial cohort alone.

In another article, I discussed why aducanumab's Biologic License Application would likely fail to receive a nod from the FDA this year. If the application is rejected, it's likely that Biogen's stock will give up all of the gains that were driven by investors' excitement over aducanumab's potential. Hence, when comparing the two company's potential catalysts, I think Gilead, with its in-demand antiviral remdesivir, has the upper hand.

In terms of profitability, Biogen has the advantage. Its gross margin of 86.4%, operating margin of 49%, and net margin of 41.5% all top those of its peer -- Gilead's gross, operating, and net margins are 79.2%, 19.1%, and 23.9%, respectively. In terms of stock valuation, Biogen, with its forward price-to-earnings ratio of 8.5, looks like a better bargain than Gilead, which is trading at a forward P/E of 11.2. However, as partial compensation for that higher price tag, Gilead does pay a dividend that currently offers an enticing 3.6% yield. Biogen does not pay a dividend.

Unfortunately, the upside of Biogen's cheaper valuation just doesn't outweigh the downsides that come with the likelihood that aducanumab will fail to be approved and that patent litigation will lead to competition for one of its key drugs. Just because Biogen's margins are excellent now doesn't mean they always will be; profitability could become a serious problem for Biogen should these risks materialize. As a result, due to the strength of its business, its upcoming revenue catalyst, and its dividend yield, my view is that Gilead represents a much better choice for biotech investors.