While the data looks good so far, the duo's treatment is behind a similar BioMarin therapy in the testing and approval process.

So far, so good for Pfizer (PFE -1.10%) and Sangamo Therapeutics' (SGMO -1.79%) gene therapy candidate, giroctocogene fitelparvovec, which the healthcare companies are developing for patients with hemophilia A.

None of the five patients in the phase 1/2 clinical trial treated at the highest dose has had a bleeding event or required infusions of Factor VIII, the protein that's missing in patients with hemophilia A. The patients, the longest of whom has been followed for over 14 months, had an average Factor VIII activity level that was 64.2% of normal.

The data looks comparable to that generated by BioMarin Pharmaceuticals' (BMRN -0.09%) hemophilia A gene therapy, valoctocogene roxaparvovec, which produced an average Factor VIII activity level 60% of normal one year after treatment at the highest dose. Patients' levels dropped off substantially as time went on, however -- at the four-year mark, the Factor VIII activity level was only 16.4% of normal. 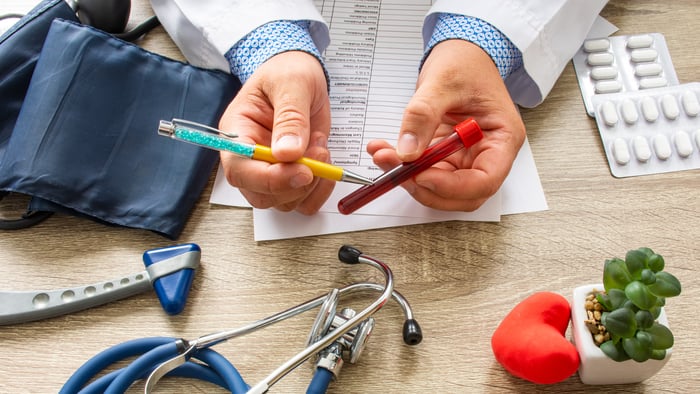 If the Factor VIII activity level in patients treated with giroctocogene fitelparvovec doesn't decline (or decline as quickly) in the coming years, Pfizer and Sangamo's gene therapy could have an advantage over BioMarin's. Of course, what really matters in treating hemophilia is bleeding events, and even valoctocogene roxaparvovec's reduced levels appear to be enough to protect patients from those. Only one out of seven patients treated at the higher dose had a bleeding event during the fourth year following treatment, compared to an average of 16.3 bleeding events in the year before they were treated.

Pfizer and Sangamo plan to start a phase 3 clinical trial for giroctocogene fitelparvovec in the second half of this year, which will still leave them substantially behind BioMarin, which has already completed a phase 3 trial for valoctocogene roxaparvovec and submitted the data to the Food and Drug Administration. The agency should make a decision on the treatment on or before Aug. 21.