Please ensure Javascript is enabled for purposes of website accessibility
Log In Help Join The Motley Fool
Free Article Join Over 1 Million Premium Members And Get More In-Depth Stock Guidance and Research
By Will Healy – Jun 18, 2020 at 8:00AM

COVID-19 will not stop the trends driving growth in the cybersecurity industry.

Though the cybersecurity industry has grown during the last few years, the benefits of that expansion have not necessarily accrued to Palo Alto Networks (PANW 0.99%). And this year, the COVID-19 pandemic has caused its earnings to fall -- a common problem -- as the contagion and global efforts to contain it caused widespread uncertainty among most of its customers.

However, while the current situation may not bring shareholders much comfort, the long-term investment thesis for Palo Alto stock remains intact. As more entities move more of their digital operations to the cloud, the growing need for the type of security Palo Alto provides should result in its stock becoming a winning play.

Palo Alto stock set a new all-time high in February. However, like most other stocks, it fell sharply during the downturn, declining by almost 50% from its peak. Though it has recovered most of that lost value in recent months, it still trades at approximately 12% below its 2020 high. 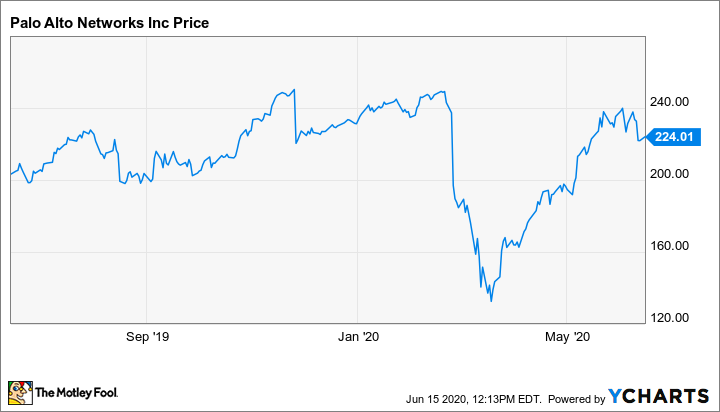 While Palo Alto has not been immune from the economic impact of the pandemic, the company has played a critical role in helping other companies as they adapt to their new conditions. This helped to mitigate its lower profits. In the most recent quarter, net income fell by about 10.7% even as revenue increased by around 19.7%. And unlike many companies, Palo Alto maintained its guidance for the year, indicating that it may face less earnings variability than many other tech stocks.

This is likely because periods of uncertainty drive an increased focus on security. Also, with the pandemic requiring tens of millions more Americans to work from home, the cloud services protection provided by Palo Alto has become even more critical to businesses.

Still, analysts forecast a 12.1% decline in profits for the company this year. Management acknowledged the expectation of lower earnings, suggesting that the impact of COVID-19 over the next nine months will be "bumpy." They also expect the consumer impact will linger for 12 to 18 months.

Investors should also keep in mind that this remains a highly competitive industry. Palo Alto faces direct competition from companies like Fortinet, which also specializes in firewall technology. Moreover, as Amazon and Microsoft continue to dominate the cloud industry, they have also placed a greater emphasis on their in-house security offerings. 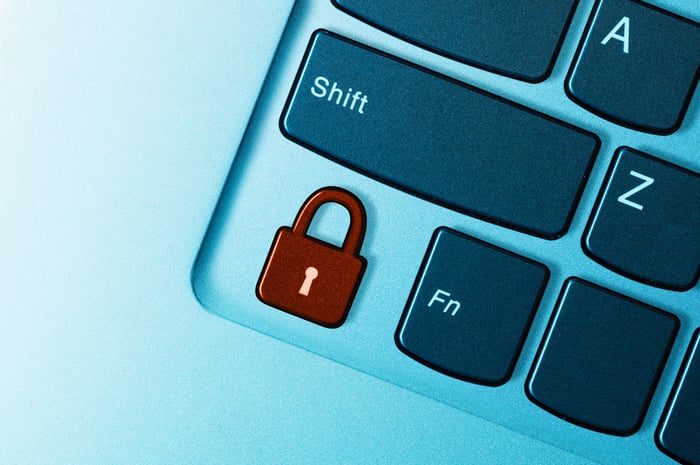 Cybersecurity investors should focus on the long term

The recent setbacks for the market make it all the more important for investors to keep their eyes on the long-term horizon. Although the pandemic has created deep uncertainty, it won't stop the advancement of technology. Mordor Intelligence forecasts a compound annual growth rate of 14.5% for the cybersecurity industry between 2020 and 2025.

Palo Alto has also continued to expand the scope of its cloud security offerings, creating products such as Prisma SASE for remote workers. To that end, Palo Alto acquired CloudGenix, which specialized in cloud security for wide area networks (SD-WANs). The company also offers Prisma Cloud as an integrated solution for corporate clients.

Moreover, they have also developed Cortex, which uses next-generation artificial intelligence for security analytics. This also takes a more preventative approach to cybersecurity, as opposed to merely deflecting attacks.

Additionally, it remains unclear whether the tech giants can deliver a superior cybersecurity product. Palo Alto does not hesitate to explain the benefits of choosing its products over those of Amazon. And it has formed a strategic partnership with Microsoft.

Either way, increasing interest in cybersecurity should bring more business to Palo Alto Networks. Analysts appear to agree. They predict a rebound for next year, with earnings forecast to increase by 20.9%. They also estimate earnings growth will average more than 17.4% annually over the next five years.

Furthermore, Palo Alto trades at a forward P/E ratio of about 39.4. That comes in somewhat below the five-year average forward multiple of approximately 52. This means that even amid the recent recovery in Palo Alto, investors can buy the stock at a discount.

The ongoing COVID-19 pandemic and its economic fallout mean Palo Alto shareholders could find it a bumpy ride for a while. However, today's headwinds will not stop the tech industry's longer-term shift toward the cloud. As cloud platforms continue to become more common, both Palo Alto and its stock should grow along with the burgeoning cybersecurity industry.