Please ensure Javascript is enabled for purposes of website accessibility
Log In Help Join The Motley Fool
Free Article Join Over 1 Million Premium Members And Get More In-Depth Stock Guidance and Research
By Alex Carchidi – Jun 19, 2020 at 7:13AM

With these three animal-health stocks, your portfolio will be stronger than ever.

Because the animal-health industry is essential for livestock-based agriculture across the globe, demand for animal-health products is both reliable and growing. This makes animal-health companies a great way to round out a balanced healthcare portfolio with stocks that don't face the same set of risks as companies devoted to human healthcare. If you're looking for quick stock picks in the animal-health sector, don't miss these three leading companies worth buying in the short term. 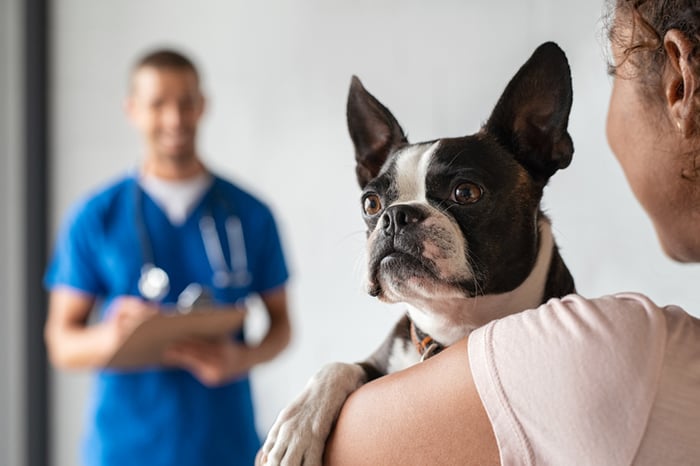 With a market cap of $65 billion and trailing 12-month revenues of $6.3 billion, Zoetis (ZTS 2.29%) is the world's single largest animal-health company. Its profit margin of 25.4% is impressive; its 63.6% return on equity is phenomenal. Both of these metrics, in addition to its year-over-year quarterly earnings growth of 35.6%, indicate that Zoetis is a very well-run company.

Financials aside, Zoetis has a massive roster of diagnostic tests, therapeutic drugs, vaccines, and other products for pets and livestock. The company's most recent product release is Simparica Trio, a preventative treatment for dogs at risk of acquiring parasites. Given the company's typical tempo for releasing new products, investors can expect at least two more new offerings to hit the market by the end of the year.

There's also evidence that Zoetis may be expanding into new markets within the animal-health industry in the short term. In April, the company acquired Performance Livestock Analytics, a cloud-based analytics platform targeted at large livestock farmers. Keep an eye on Zoetis's news feed to see how the company plans to use its acquisition to expand into new markets, but don't be afraid to make a purchase before an announcement.

Elanco (ELAN 1.21%) is a smaller animal-health company than Zoetis, with a market cap of $8.6 billion and trailing 12-month revenue of $3 billion. But, with more than 125 product lines for pets and livestock, and operations in more than 90 countries, Elanco still has a lot to offer investors interested in buying for the long term.

In June, Elanco announced that European regulators had approved its acquisition of Bayer's (BAYN) animal-health division for $5.3 billion in cash and $2.3 billion in shares. To raise cash for the deal, Elanco used a combination of debt and new equity that it expects to pay off by 2022. Since the acquisition's initiation in late 2019, Elanco has divested from numerous Bayer animal-health products to raise funds, including a February sale to Merck (MRK 0.74%) for $55 million in cash. Integrating this new acquisition is one of the top priorities for Elanco's leadership moving into the second half of 2020, as is increasing the company's profitability above its current negative 0.42%.

In the long term, Elanco's Bayer purchase will pay off. The company expects that its revenues will increase by $1 billion by 2023, in addition to about $275 million in synergies and cost reductions. Furthermore, the acquisition has given Elanco eight new pipeline projects and more than 30 life-cycle projects, shoring up its offerings substantially.

Elanco has been hit hard by the pandemic, and it expects to suffer additional struggles through the rest of the year. In its latest earnings report, the company stated that its quarterly revenue growth year-over-year had dropped by 10%. The company's next earnings report later this summer will likely reflect the toll that the coronavirus pandemic and difficult trade conditions have inflicted on the company's bottom line -- and that makes for a great time to buy.

For speculators intrigued by rapid returns, Covetrus (CVET -0.07%) is notable for its explosive growth of more than 40% in the past month. Unlike the other animal-health companies covered here, Covetrus produces software for managing veterinary prescriptions, animal-health supply chains, and veterinary practices. This means that Covetrus isn't exposed to as much supply-chain risk or product-development risk as other animal health companies, and it also means that its marginal cost of production is significantly lower. 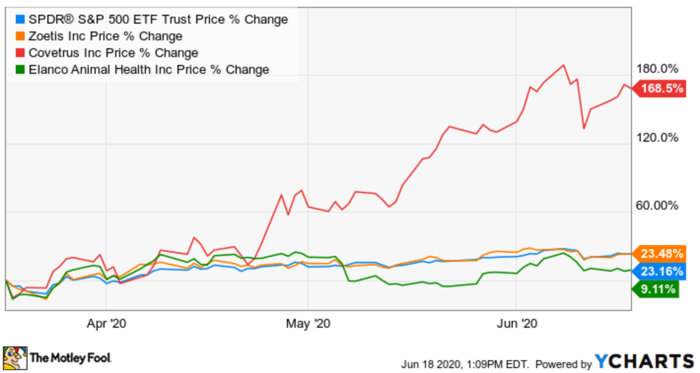 Sales have steadily increased, though the company still isn't profitable. Covetrus earned $1.1 billion in the first quarter of this year, an increase of 13% compared with 2019. In April, management announced a $250 million convertible preferred-equity investment from a private investment firm that was already a shareholder. The purpose of the investment was to provide Covetrus with short-term liquidity and to support its continued operational expansions in the face of the pandemic.

While Covetrus appears to be surging right now, and its sales growth suggests a bright future for the company, it's unclear how long its road to profitability will be. Grab the stock while it's still hot, and don't be afraid to back out of your position early if the remaining earnings reports this year show the company's sales growth ebbing substantially.