Please ensure Javascript is enabled for purposes of website accessibility
Log In Help Join The Motley Fool
Free Article Join Over 1 Million Premium Members And Get More In-Depth Stock Guidance and Research
By Jim Halley - Jun 19, 2020 at 6:25AM

Can the run for Sarepta Therapeutics, Viela Bio, and Aptose Biosciences continue?

Biotech has outpaced nearly every other sector this year in growth. While the S&P 500 was down 3.6% for the year as of Wednesday, the NASDAQ Biotechnology Index (NBI) is up 10.5% in 2020. That growth carries an enormous amount of risk, however, as many biotech companies aren't making profits and are burning through cash while searching for drugs that will turn things around.

Here are three promising biotechs that stand out and whose share prices have been climbing this year because of positive clinical trials. 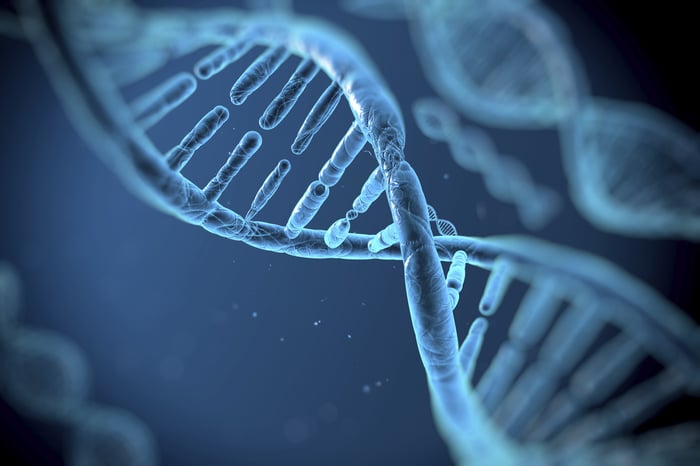 The Massachusetts-based biotech company has seen increased losses over the past few years, but this past quarter showed signs that it may be closer to turning a corner toward profitability. Revenue was $114 million, up 31% year over year. Net loss was $17.4 million, an improvement of 77% over the same quarter in 2019.

The company is also in a much better cash position thanks to a licensing agreement it entered into late last year with Roche (RHHBY 1.30%) regarding SRP-9001, a gene therapy drug for Duchenne muscular dystrophy (DMD).

Sarepta gave Roche overseas rights to the drug while retaining U.S. sales rights. In return, Sarepta got $1.15 billion in an upfront payment, up to $1.7 billion in regulatory and sales markers, and royalties on net sales, plus cost sharing on the drug's global development expenses. Flush with $1.7 billion in cash, Sarepta is in a good position and has 43 programs in its pipeline.

On Monday, the company announced positive data for SRP-9001's effectiveness in a clinical trial. Published in The Journal of the American Medical Association (JAMA) Neurology, the study said the investigational gene transfer therapy gave its four participants functional improvement on the North Star Ambulatory Assessment scale (NSAA). It also lowered levels of creatine kinase (CK), an enzyme associated with the muscle damage caused by DMD.

DMD is a rare genetic progressive disorder that affects one in every 3,500 to 5,000 male infants. It leaves most patients in a wheelchair by age 15 and kills them by their early 20s.

A 2018 report posited that the market for DMD drugs will reach $4.1 billion by 2023. With 10 DMD drugs in its pipeline, Sarepta is an industry leader in that market.

The share price for Aptose Biosciences (APTO 0.19%) stock has risen 230% in the past year and 34% in the past three months. That's a dizzying rise for a clinical-stage biopharmaceutical company that may be two years or more from earning any money. In the first quarter, it lost $11.5 million, an 109% increase from the same quarter in 2019.

However, the Toronto-based company has two very promising cancer-fighting drugs in the pipeline. At the 25th Congress of the European Hematology Association last week, Aptose presented its early-stage Phase 1a/b findings on CG-806, which it is developing with CrystalGenomics of South Korea. Aptose says the drug has been effective at targeting B-cell and myeloid tumors to treat non-Hodgkin lymphoma and acute myeloid leukemia, respectively, with few adverse side effects. The trial isn't scheduled to end until late next year.

"We are pleased by evidence of CG-806's safety and tolerability, along with early indicators of pharmacologic activity," said William G. Rice, the company's CEO.

Aptose is also developing APTO-253 to inhibit expression of the MYC oncogene, a gene that is often seen in certain cancers. The hope is that APTO-253 will arrest the cell cycle and cause cell death in solid tumors and blood-related cancers. That trial isn't scheduled to end until 2024.

Aptose has $90 million in cash, which it says is sufficient to get it through 2022. And if CG-806's trials continue to go well, Aptose should have no difficulty getting further funding.

Viela Bio is off to the races with its first drug

Based in Gaithersburg, Md., biopharmaceutical company Viela Bio (VIE) U.S. Food and Drug Administration (FDA) approval last week to market Uplizna to treat adults with neuromyelitis optica spectrum disorder who are anti-AQP4 antibody positive. The disorder, as the Mayo Clinic explains, "occurs when your body’s immune system reacts against its own cells in the central nervous system, mainly in the optic nerves and spinal cord, but sometimes in the brain." The FDA has previously granted Breakthrough Therapy and Orphan Drug designations to Uplizna.

Viela was already doing well before the news. It's up 80% for the year.

The company has other promising drugs in its pipeline. It is in several clinical trials for inebilizumab to treat myasthenia gravis (a neuromuscular disease), IgG4-related disease (a chronic inflammatory condition), and kidney transplant rejection. Two other drug candidates, VIB4920 and VIB7734, are being tested for the treatment of other autoimmune diseases.

Biotech stocks aren't for the faint of heart

Investing in any early-stage biotech company involves a lot of risk. You're buying stock in a business that is not yet turning a profit. Reversals are common, as 90% of developed drugs never make it to the market.

Still, there's a huge upside to all three of these companies because they are developing therapies to fight rare diseases -- therapies that can command a big price tag.

Of the three, Viela seems to have the biggest short-term upside with a new drug about to hit the market. Sarepta is probably the safest bet because it has the biggest pipeline and the strongest cash position.