Please ensure Javascript is enabled for purposes of website accessibility
Log In Help Join The Motley Fool
Free Article Join Over 1 Million Premium Members And Get More In-Depth Stock Guidance and Research
By Billy Duberstein – Jun 20, 2020 at 8:25AM

The following stocks have elements he looks for in his holdings, so put them on your watch list.

Though Warren Buffett has been the target of doubters and naysayers of late, there is no denying his long-term track record, or that of his conglomerate Berkshire Hathaway (BRK.A 1.68%) (BRK.B 2.17%). Buffett has traditionally stuck to his very simple criteria in picking stocks: invest in businesses you understand, choose companies with sustainable competitive advantages and favorable long-term prospects, make sure they are run by competent and trustworthy managers, and buy in at reasonable prices.

Unfortunately, Buffett has traditionally shied away from technology stocks, claiming that he doesn't understand the space very well and/or that those stocks seem expensive. That has led Berkshire to miss out on a lot of the tech-fueled market gains this year and over the past decade.

And yet, sticking with Buffett's universal criteria is still a smart idea. Of the following three Buffett-like stocks, two have beaten the market handily over the past five years, and the other one is showing rapid business improvement, with intriguing potential. 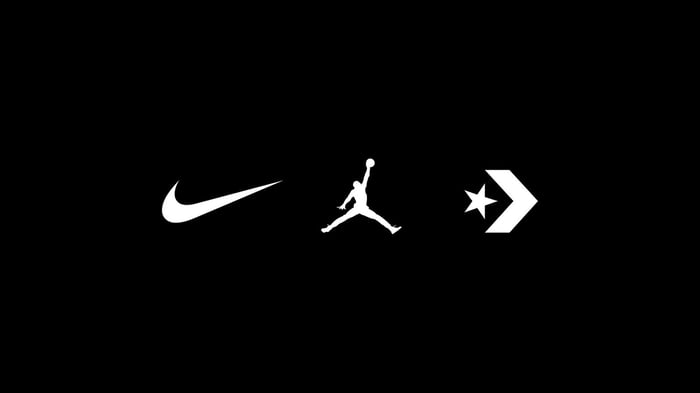 Two companies that anyone can understand are shoe king Nike (NKE 2.74%) and athleisure darling lululemon athletica (LULU 4.49%). As you can see below, both apparel brands have managed to outpace the overall market over the past five years: 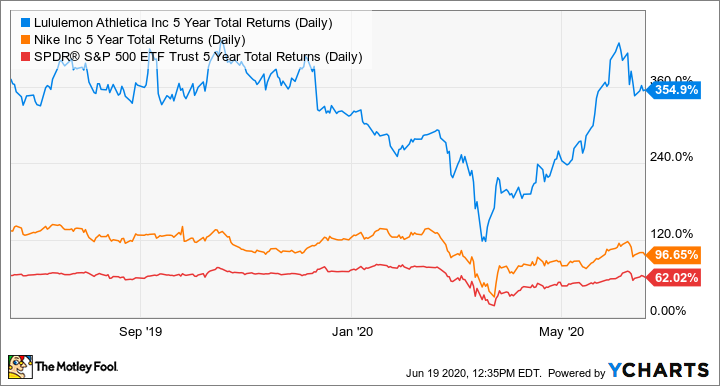 What's the secret to each company's success? Each has one of Buffett's favorite competitive advantages: a premium brand. With a premium brand, a company can raise prices in case of inflation without the fear of losing customers (otherwise known as pricing power). Even better is when a premium brand is attached to a relatively low-ticket item, such as a pair of sneakers or yoga pants. That equals high volumes and high margins, giving these companies outstanding returns on invested capital.

In fact, over the last 12 months (even including a slowdown from the COVID-19 pandemic), Nike achieved a 48% return on equity (ROE), and Lululemon achieved a 36.1% ROE. Even more impressive for Lululemon, its remarkable ROE included the recent quarter, ended in May, when much of its store base was temporarily closed.

One potential positive during the pandemic is people wearing more casual wear while working from home instead of going to the office, as well as a focus on health and wellness. The athleisure sector was already expected to grow at a 6.7% annual rate through 2026, and that trend could accelerate if even more people ditch business suits for casual wear. Both Nike and Lululemon are premier brands that play into wellness culture, meaning both are strong candidates to continue their outperformance in the years ahead.

Buffett doesn't own many clothing brands today, though Berkshire does own Fruit of the Loom underwear and Russell Brands athletic equipment. Lululemon and Nike have probably been too expensive for the price-conscious Buffett to buy, with Lululemon at 68.7 times earnings and Nike at 34, but that hasn't stopped either stock from bouncing back strongly from March's sell-off. Both companies still have strong growth prospects and would still be strong core holdings in consumer discretionary portions of a diversified portfolio. 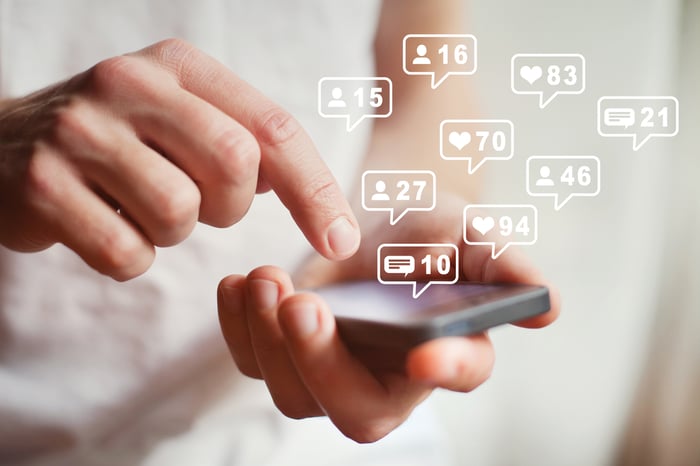 Some of Warren Buffett's favorite businesses (that is, before the arrival of the internet) were newspapers. That's because newspapers were usually local monopolies or duopolies on information within a particular city, state, or country, making them prime real estate for advertisers.

In the past, Berkshire owned The Buffalo News outright, as well as a significant amount of stock in The Washington Post, profiting handsomely from each in the 1970s and 1980s. But the internet changed the local newspaper business in a very big way, and Berkshire notably sold its BH Media group earlier this year for a mere $140 million to Lee Enterprises, which included 30 newspapers, including The Buffalo News, along more than 49 paid weekly publications.

While traditional newspapers may be on a permanent decline, tech-enabled social media "town squares" have somewhat replaced them as the go-to news source for many, with Twitter (TWTR -2.96%) emerging as one of the leading platforms. While Twitter isn't exactly the same thing as a newspaper, many tune in to it to get the news they're looking for and to hear from prominent public figures directly.

What's interesting is that Twitter should technically benefit from powerful network effects like many social media companies do. And yet, it has had a hard time turning a profit for much of its history.

That may be changing. In the past year, Twitter has really focused on making its platform more relevant to users, less spammy, and more helpful. On the recent conference call with analysts, CFO Ned Segal said: "People have had to find and follow all the accounts related to a particular topic or an interest. We should be doing that work for them. This also gives us much, much stronger signal to our revenue products and to our business."

The results have been promising: Twitter's monetizable daily active users (mDAUs) have accelerated for an impressive five straight quarters, showing that the product improvement is resonating:

Of course, advertisers have also pulled back in the most recent quarter as the COVID-19 pandemic caused widespread lockdowns, and Twitter posted a small net loss in the first quarter. Yet there's reason to think bigger profits could be around the corner.

In March, activist hedge fund Elliott Management took a stake in Twitter, and Elliott was subsequently followed by private equity firm Silver Lake Partners, which invested $1 billion in the form of convertible notes. Both outside investors received board seats, and as part of Silver Lake's $1 billion investment, Twitter agreed to fund a $2 billion buyback.

With technology improvements accelerating DAUs and two very involved investors with skin in the game now on the board of directors, it's not a stretch to think Twitter could be generating some serious cash as the economy recovers and advertising picks up.

Warren Buffett isn't invested in these three stocks, likely due to valuation concerns for Nike and Lululemon and Twitter being a tech company. But both Nike and Lululemon have premium brands with high ROE, while Twitter is forming itself into a global daily news resource for hundreds of millions, with potential profit improvement around the corner. That makes all three prime watch-list candidates as the economy recovers from the coronavirus pandemic.

Why Is Everyone Talking About Lululemon Stock?