Please ensure Javascript is enabled for purposes of website accessibility
Log In Help Join The Motley Fool
Free Article Join Over 1 Million Premium Members And Get More In-Depth Stock Guidance and Research
By Alex Carchidi – Jun 20, 2020 at 6:15AM

Healthcare nonprofits are a great option for a charitable donation, and these three organizations are among the best.

If you've ever donated to a nonprofit, you know how rewarding it is to contribute to a worthy cause. Nonprofit health organizations bridge the gap between public and private resources by disseminating information, contributing directly to key efforts or individuals, and advocating for policy change.

Selecting a nonprofit where the impact of your charitable donation is felt isn't as simple as it once was, however. Everyone has heard about corrupt or poorly run nonprofits where the majority of donations go to administrative overhead or executive salaries rather than serving the nonprofit's cause via its programs. If you're interested in making a high-impact donation but you don't want to waste your capital on a potentially ineffective organization, look no further than these three nonprofits. 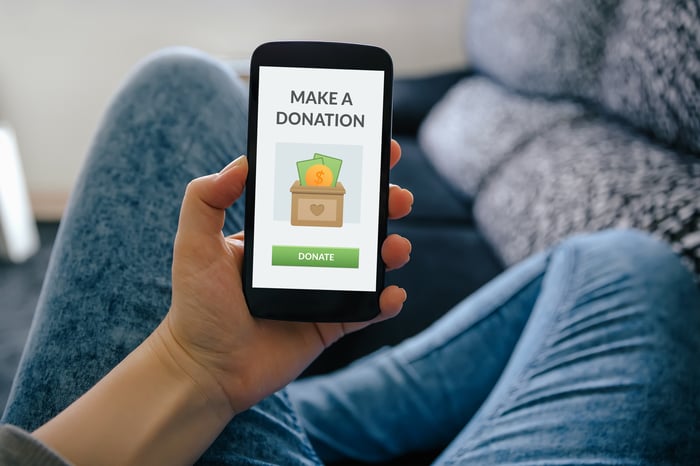 With 2017 revenue of $802.6 million, the American Cancer Society (ACS) is America's largest nonprofit catering to every facet of cancer prevention, research, treatment, recovery, and patient advocacy. Since its founding in 1946, the ACS has invested more than $4.8 billion in cancer research, leading to an immeasurable number of scientific advancements in treating cancer.

As a nonprofit, there's a lot to like about the ACS in comparison to smaller and less broad cancer research nonprofits. The ACS spends 75.4% of its donations on its service programs, meaning that its administrative costs are relatively low for a large nonprofit. Likewise, the nonprofit watchdog Charity Navigator rates the ACS' accountability and financial transparency at 97 out of 100, so donors can have confidence that their contributions are being used properly.

In 2018 alone, the nonprofit funded 740 different research grants, contributing to cutting-edge investigations into potentially curative cancer treatments as well as projects attempting to reduce the side effect profiles of existing therapies.

In the U.S., healthcare is frequently unaffordable for patients with chronic health issues even when they have health insurance. That's where the HealthWell Foundation comes in. HealthWell provides cash infusions to patients so they can afford their prescription copays, insurance costs, and transportation costs for medical visits.

The foundation has helped more than 500,000 people with their medical bills so far, with more than 117,000 people served in 2018 alone. In total, the nonprofit disburses more than $600 million in grant funding per year. With an average grant amount of nearly $3,300, HealthWell is an exemplar in direct health aid because 98.3% of its funds go directly to its service programs helping people pay their medical bills.

Recently, the HealthWell Foundation started a fund for patients struggling with copays related to treatment for COVID-19. But, nearly a month later, the nonprofit was forced to close its access to new patient applications because of overwhelming demand. Substantial donations from the public will be necessary to reopen access to the COVID-19 fund so that new patients can benefit.

3. The National Organization for Rare Disorders

The National Organization for Rare Disorders (NORD) is dedicated to providing information, medication funding, and research grants for investigating rare diseases. For patients with diseases so uncommon that their prevalence in the population isn't even known, like Achard-Thiers syndrome, NORD's Rare Disease Database is a lifeline of information and clinical trial recruitment activity.

Because NORD targets a highly diverse and inherently uncommon cohort of patients, it isn't the largest nonprofit around. NORD reported $47 million in revenue in 2018, with 86.3% of its revenue going to service programs. Nonetheless, NORD is rated a perfect 100 out of 100 for both financial efficiency and financial transparency by Charity Navigator, an accomplishment only a small handful of nonprofits achieve.

In 2019, NORD disbursed funds to more than 8,000 patients who needed help paying for their copays or transportation costs related to their rare disease treatment. NORD also funds research efforts for rare diseases, with 41 different clinical trials initiated as a result of its grants last year.

Nonprofits need your donation now more than ever

Making a charitable donation to a highly rated nonprofit like NORD, the HealthWell Foundation, or the ACS will help to serve those in need. More people are in need now than ever before, and due to the economic problems caused by the pandemic, nonprofits everywhere are struggling to maintain funding for their service programs. Some nonprofits have expressed hopes that government funding can help them to continue operations despite plummeting contributions from the public, but it's clear that there hasn't been enough aid.

That means that it's up to the public to chip in -- so if you have $1,000 to spare, consider donating to one of these worthy causes today.