The COVID-19 pandemic may encourage Macy's to close stores faster than previously planned, enabling it to cash in on more of its real estate.

In early 2016, Macy's (M 7.52%) management realized that the company had too much debt. While Macy's had investment-grade credit ratings, growing competition and falling mall traffic were starting to erode the retail icon's profit margins, undermining its ability to support its more than $7 billion of borrowings.

As a result, Macy's dramatically slowed (and soon suspended) its share repurchase program and began to aggressively reduce its leverage, using a combination of free cash flow and asset-sale proceeds. Over the next four years, Macy's slashed its debt load by more than $3 billion, ending fiscal 2019 with just over $4 billion of debt. 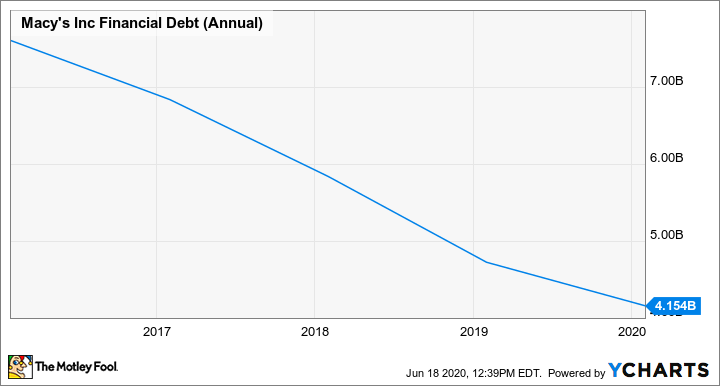 Unfortunately, the COVID-19 pandemic has undone much of this progress. Macy's expects to post an adjusted net loss of $630 million for the first quarter and a similar loss in the second quarter. The company recently borrowed $1.3 billion and expanded its credit-line access to over $3 billion to ensure that it has enough liquidity to survive the pandemic.

Business trends may improve later this year, but mall traffic and demand will likely remain historically weak until the pandemic ends. That means Macy's can't count on generating free cash flow to repay debt in the near term. However, Macy's might have an opportunity to raise cash by selling real estate as it moves to trim its store count over the next year or so.

There can be value even in weaker malls

In February, Macy's announced plans to close 125 stores within three years, exiting weaker malls where traffic and sales are on a downward trajectory. More recently, Macy's has hinted that it could accelerate and expand its store closure plans, which isn't surprising considering the massive impact of the pandemic on mall-focused retail.

Since Macy's owns the majority of its stores, these store closures will enable the company to sell the underlying real estate. While stores in struggling malls might seem to have little or no value, in many cases the land is worth quite a bit. (At a typical mall where Macy's owns its store, it also owns a substantial amount of parking lot land.)

For example, in April -- despite the pandemic -- Macy's was able to sell stores in Fort Collins, Colorado and Citrus Heights, California for $5.5 million and $3.5 million, respectively. Both stores remain open for now, but neither is likely to be in the retailer's long-term plans. And just this week, Macy's sold a store in Winston-Salem, North Carolina that is about to close for $8 million. Macy's also owns stores at mediocre malls in cities like Boynton Beach, Florida and Dayton, Ohio where other department stores have sold their real estate for roughly $3 million to $5 million in recent years. A Macy's store in Pompano Beach, Florida that is closing in 2020 could be worth even more; a neighboring Sears store sold for $11 million a couple of years ago and the mall owner wants to turn the Macy's property into low-rise apartments.

Obviously, there's a range of values for the stores that Macy's is most likely to close. But with more than 15 owned stores closing in 2020 and dozens more set to follow within a year or two, the total opportunity likely adds up to hundreds of millions of dollars.

Time to cash in on more high-profile locations?

Macy's is also likely to think harder about closing stores that aren't especially high performers and sit on valuable real estate. These stores may be quite profitable, but they probably won't generate enough profit in the years ahead to justify the opportunity cost of not selling them.

For example, Macy's is already shopping its store in the Ballston neighborhood of Arlington, Virginia. The site is adjacent to a metro station and is approved for up to 350,000 square feet of mixed-use development, which should make it attractive to developers. Macy's may also finally sell the leasehold for its store in Miami Beach, which sits in a prime location, and for which Macy's pays hardly any rent.

Macy's also owns several stores in underperforming malls in metro areas with high land values, such as San Francisco, Los Angeles, and Washington, D.C. These properties could be worth tens of millions of dollars each. Cashing in on that real estate value is likely to be the best move for Macy's long-term health.

In a presentation earlier this year, Macy's estimated that asset sale proceeds would total around $700 million between 2020 and 2022. On the one hand, COVID-19 could hurt property values, making it hard to reach that number. On the other hand, if property values don't fall much and Macy's reduces its store count more aggressively than previously planned, asset sale proceeds could exceed this target by a significant margin.

Bringing in $700 million or more of asset sale proceeds would go a long way toward repairing Macy's balance sheet. The company's 2023 and 2024 debt maturities have been trading near 80 cents on the dollar recently, so if Macy's can ensure that it has adequate cash, it may have an opportunity to repurchase some of this debt at a discount, thus getting more bang for its buck.

Ultimately, returning to positive free cash flow as soon as possible -- ideally next year -- is critical regardless of how much cash Macy's is able to raise from real estate sales. With negative free cash flow, any debt reduction from asset sales would quickly be undone. By contrast, if free cash flow turns positive again, Macy's would be able to accelerate the process of repaying debt, allowing it to fix its balance sheet and start focusing on the future.