Please ensure Javascript is enabled for purposes of website accessibility
Log In Help Join The Motley Fool
Free Article Join Over 1 Million Premium Members And Get More In-Depth Stock Guidance and Research
By Keith Speights – Jun 21, 2020 at 7:03AM

Hint: It's because of what might happen in five states.

Three hundred to one. Those were the odds against the U.S. legalizing marijuana at the federal level that I calculated 10 months ago. I didn't just pull those numbers out of thin air. They were based on a reasoned analysis of all the dynamics in play last summer.

But a lot has changed since August 2019. The chances of a change in U.S. marijuana laws are much greater than they were just a few months ago. In fact, I'd go as far as to say that U.S. marijuana legalization is now likely on the way as soon as 2021. 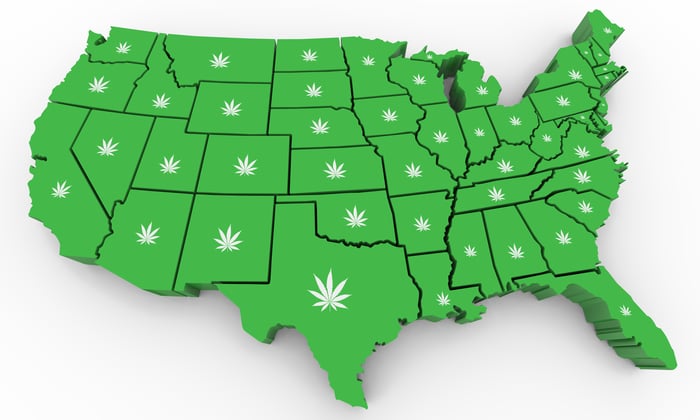 Before we get to why my view has flipped 180 degrees, let's look at why federal anti-marijuana laws haven't already changed. After all, public support for marijuana legalization is at all-time highs (no pun intended). Thirty-three states have legalized medical cannabis. Eleven states have legalized recreational pot. More states will probably be added to both lists after the November elections.

The lack of federal marijuana legalization hasn't been due to a lack of trying. In November, the U.S. House of Representatives Judiciary Committee even passed a bill that would, among other things, remove marijuana from the list of federally controlled substances and allow states to establish their own marijuana policies.

However, this legislation never made it to the House floor for a vote even though it probably would have passed. So why wasn't it presented for a vote? For one thing, there are competing bills that could be palatable to more representatives. Perhaps more importantly, any attempt to legalize marijuana would almost certainly be dead on arrival in the Senate.

Senate Majority Leader Mitch McConnell decides which bills come up for a vote on the Senate floor. His home state of Kentucky has a significant hemp industry. Sen. McConnell isn't likely to make any move that could hurt businesses in his state, and marijuana legalization could negatively impact the hemp industry.

Until recently, Republicans were favored to retain control of the U.S. Senate. That would almost certainly mean that McConnell would keep his spot as majority leader and be able to throttle any attempts to legalize marijuana at the federal level.

But now the political winds appear to have shifted. The Democrats need to flip five seats to wrest control from the GOP. They can also gain control of the Senate if they add four seats and Joe Biden wins the presidential election. Complicating things for the Democrats, though, is that they're likely to lose the Alabama Senate seat currently held by Doug Jones.

RealClearPolitics rates six Senate seats as toss-ups. The latest polls show the Democratic candidates ahead in all of these races. Joe Biden is also running ahead of President Trump both in national polls and in several swing states that are key to securing victory in the Electoral College.

These polling trends are also reflected in betting markets. United Kingdom bookmaker Ladbrokes and online betting platform Betway Sports now view the odds are in favor of seeing Democrats take control of the Senate and having Joe Biden win the presidency.

If the Democrats capture the Senate, my prediction is that bills to legalize marijuana at the federal level will easily pass both the Senate and the House (which appears to be safe for Democrats) in 2021. I don't see either Joe Biden or Donald Trump vetoing this legislation, despite the lack of fervor for either candidate on marijuana legalization.

How can investors profit if U.S. marijuana legalization is truly around the corner? I especially like two stocks: Green Thumb Industries (GTBIF 10.99%) and Innovative Industrial Properties (IIPR 3.03%).

Green Thumb Industries ranks as one of the leading vertically integrated multistate cannabis operators. The company operates 13 cultivation and manufacturing facilities and 46 retail cannabis stores. Its products are distributed in 12 states.

Sales are soaring, with GTI posting quarter-over-quarter revenue growth of more than 35% in the first quarter. The company isn't profitable yet, but its bottom line is steadily trending in that direction.

Meanwhile, Innovative Industrial Properties rakes in nice profits every quarter. The real estate investment trust (REIT) buys properties then leases them back to medical cannabis operators. So far, IIP owns 57 properties in 15 states. That count is growing quickly, though.

IIP's revenue more than tripled year over year in its latest quarter with earnings soaring 249%. The company's dividend has grown along with its earnings and now yields 4.3%.

My view is that the market caps of both of these stocks are well below what they would be if marijuana is legalized at the federal level. But what if the political dynamics change yet again (which could very well happen) and the prospects of the U.S. legalizing pot in the near future diminish? Both Green Thumb Industries and Innovative Industrial Properties should still deliver solid gains.

Regardless of what happens in the November elections, these marijuana stocks should emerge as winners.