Please ensure Javascript is enabled for purposes of website accessibility
Log In Help Join The Motley Fool
Free Article Join Over 1 Million Premium Members And Get More In-Depth Stock Guidance and Research
By Jennifer Saibil – Jun 22, 2020 at 8:00AM

Investors are anxious to see how store closures affected the athletic giant during the pandemic.

Nike (NKE 3.79%) scored a victory in its fiscal third quarter with a 5% increase in sales despite store closures in China. But that's not likely to happen in the fiscal fourth quarter when stores were shut down in the U.S., its largest market, for two months. The big questions are: How bad will the damage be, and how long will the effects last?

Nike has a long history of sales growth as the dominant brand in athletic footwear and apparel. It has built up an extensive pipeline with innovative, technologically advanced products that dictate the new styles in the industry each season.

And its popularity is not limited only to athletes. It's the No. 1 apparel brand according to Forbes, coming in as the 14th most valuable brand overall. It consistently takes the top spot in Piper Sandler's annual teen survey for No. 1 retail brand, where it gained share in the most recent report.

Its annual sales dwarf those of its competitors. Reaching $39.1 billion in 2019, that is greater than the combined top lines of Adidas, Under Armour, and Lululemon.

Nike gave its most recent update on May 14, when it said that stores in China were nearly all reopened. At the same time, stores all over the rest of the world were closed for about two months, and Nike said that it expects those closures to have a "material" effect on fourth-quarter earnings. 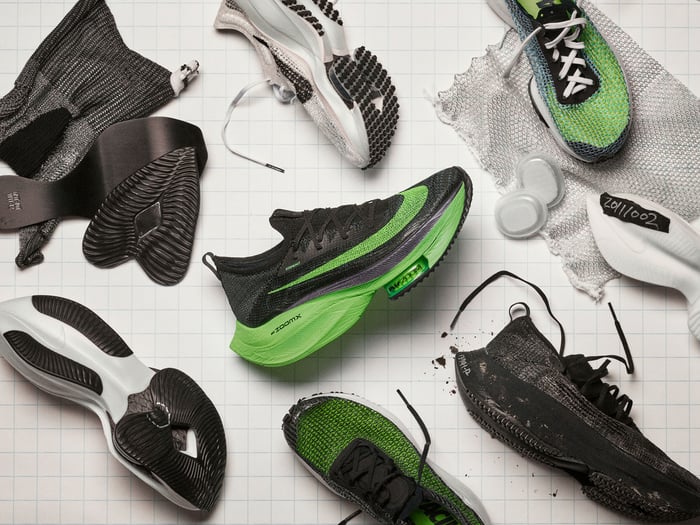 As of that update, there was higher inventory and slower sales because of store closures, and the company was stepping up engagement with its digital ecosystem to make up some of the slack.

CEO John Donahoe said in the update, "Consumers around the world are recognizing the need for an active and healthy lifestyle and sport is now more meaningful than ever. With our strong digital foundation, brand momentum and financial position, we believe this will be a catalyzing moment that strengthens Nike's long-term future."

Could this be a blessing in disguise? Although there's short-term pain, consumers have been forced to gravitate toward digital offerings, thereby engaging with the Nike brand in a more meaningful way, and that unlocks a lot more future opportunity for the company.

What's in the company's favor even short-term is the general uptick in digital over this time and Nike's focus on its direct-to-consumer business before the pandemic hit, which puts it in the right position to benefit from the shift at least as much as any other company that's been doing well with digital. So while near-term results are likely to show significant declines as a result of COVID-19, they will to some degree be mitigated further out by a solid e-commerce business.

Analyst consensus estimates for the fiscal fourth quarter are for revenue of $7.43 billion and GAAP earnings of $0.04 per share, according to S&P Global Market Intelligence. Those figures represent a sizable drop from the $10.18 billion of revenue and $0.62 per share earnings recorded in the prior-year period.

However, Nike has been hard at work even with stores closed. It forged ahead with product launches, including several shoes and clothing lines coming out over the past few months under both the Nike and Converse banners. The company is also offering free classes and virtual coaching to motivate consumers to engage with the brand.

The U.S. Department of Commerce reported that May retail sales surged higher than expected, and the clothing and accessories segment increased 188% from April. Nike is likely to have claimed a sizable portion of that month-to-month growth with its considerable market prowess.

After tumbling almost 40% in late March along with the broad market, shares of Nike have rebounded and are nearly flat year to date. When Nike releases its fiscal fourth-quarter earnings on Thursday, June 25, investors can expect to see volatility based on the results, but however the numbers shake out, shareholders can be confident that an investment in Nike will return value in the long run.