The results indicate that a prime dose plus a booster notably increases its effect.

The results of a clinical trial in pigs administered AstraZeneca's (AZN 0.83%) COVID-19 vaccine indicate that two doses of it could be effective in treating the disease. On Tuesday, the Pirbright Institute -- the U.K. researcher conducting the trial -- said that a prime dose followed by a booster produced a stronger immune response than a single dose.

The study was specifically designed to research whether a prime/booster combination of AZD1222 would be notably more efficacious. "This finding in pigs is important as it reveals that two doses of the new vaccine could potentially give significantly more protection in humans than a single dose, and therefore provide a clinical benefit," Pirbright wrote. 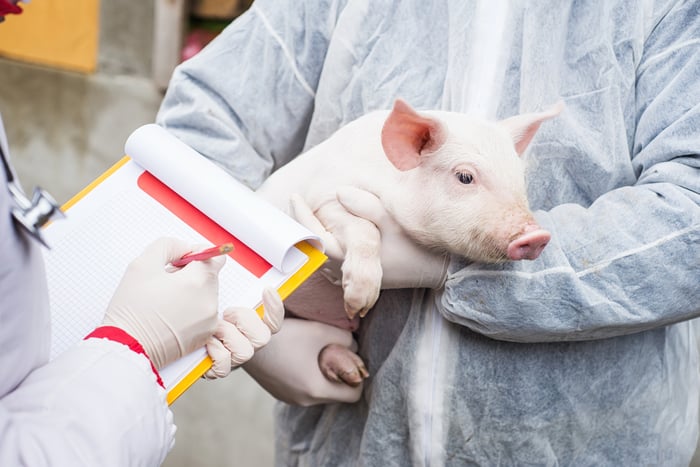 However, although pigs are physiologically more similar to humans than many other animals, clinical studies conducted on them indicate only potential for us, and are not a guarantee of success. Trials on human subjects are thus necessary following such research.

Last month, it was announced that researchers at the University of Oxford had begun enrolling people for a phase 2 clinical trial of AZD1222. This will be a significantly expanded trial compared to phase 1, involving 10,260 subjects.

The storied U.K. university is where AZD1222 was created; AstraZeneca subsequently licensed the vaccine. As a global pharmaceutical company, AstraZeneca has already made arrangements to produce and distribute the vaccine at cost. Among other deals it has agreed with Europe's Inclusive Vaccines Alliance to provide up to 400 million doses throughout that continent when it is approved and available.

The company recently signed several agreements that will allow it to produce over 2 billion doses.

On Tuesday, AstraZeneca's shares rose by nearly 1.6%, outpacing the gains of the broader stock market.