Please ensure Javascript is enabled for purposes of website accessibility
Log In Help Join The Motley Fool
Free Article Join Over 1 Million Premium Members And Get More In-Depth Stock Guidance and Research
By Will Healy – Jun 23, 2020 at 8:48AM

Following the March market lows, Okta (OKTA 0.12%) stock shot past its February peak. As of this writing, this tech stock trades near all-time highs. With more employees working from home amid the coronavirus pandemic, the company's single sign-on solution continues to grow in popularity.

Unfortunately for new investors, this has taken Okta's valuation to stratospheric highs. While that may not change the long-term prospects for Okta, it does call into question the wisdom of buying now. Although the level of anticipated profit growth indicates that Okta should trade at a higher level years from now, investors should consider staying on the sidelines for the foreseeable future.

To be sure, the value proposition behind Okta's leading product is self-evident. People have grown tired of maintaining dozens of passwords that have to change regularly. To that end, the single sign-on solution makes life easier for many. This value has translated into customer growth and positive cash flows that have sent the stock surging higher since the lows in March.

Investors should expect Okta to grow as the industry grows. For the identity and access management market, Grandview Research estimates a compound annual growth rate of 13.1% per year between 2019 and 2025.

However, a rising price has led to questions about the value proposition of Okta stock. Since the beginning of 2020 to when I am writing this on June 19, Okta stock has risen by more than 67%. When measured from its intraday March low, it has risen nearly 123%. 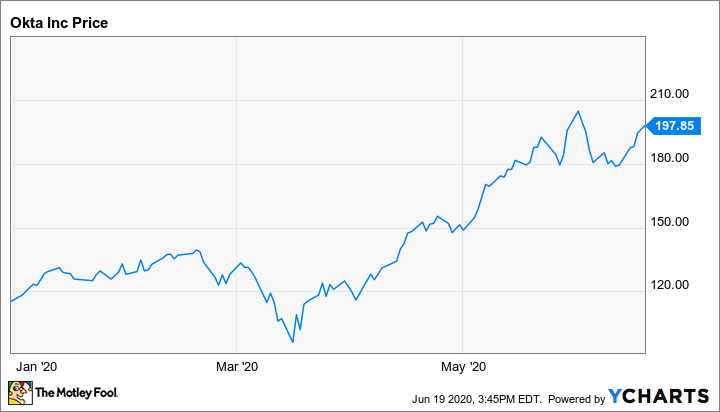 Since the company does not yet turn a profit, the stock does not have a P/E ratio. Nonetheless, other measures point to concerning signs. As a result of the higher stock price, the price-to-sales (P/S) ratio has grown to 36.6. This is a radical departure from past sales multiples. As late as last year, the P/S ratio stood at just under 25. In 2017, the year it launched its IPO, Okta sported a sales multiple of just over 11.

High revenue and earnings growth likely explain the multiple expansion. The popularity of Okta's solutions has helped to expand the number of subscribers and drive revenue higher. In the most recent quarter, overall revenue rose by 46% year over year, while subscription revenue increased by 48%.

Analysts anticipate this trend will slow somewhat but remain robust. They expect revenue growth will come in at 30% or more for both this year and next. Forecasts point to a long-term earnings growth rate of 25% per year for the next five years. Some also believe the company will turn a profit as early as next year. 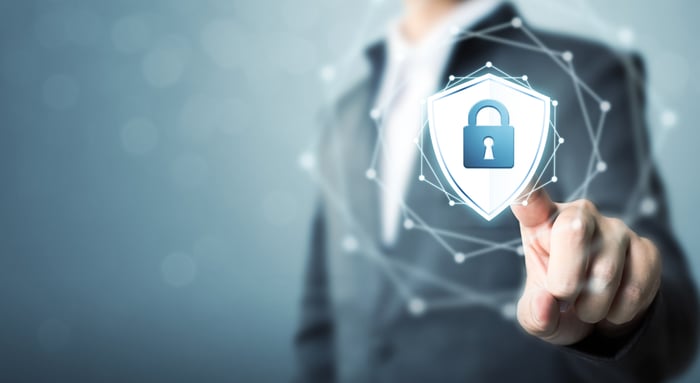 The case for not buying now

Admittedly, with Okta's growth levels, investors should not expect a low valuation. The average P/S ratio for the S&P 500 stands at around 2.2. It is doubtful Okta's multiple will fall to that level anytime soon. However, even with the company's impressive growth, 30% revenue growth does not appear sufficient to justify a market cap that comes in 35 times higher than current revenue levels.

Moreover, investors should not forget that the company has attracted smaller competitors.  More worrisome for Okta is potential competition from the likes of Microsoft and Amazon. The cash and short-term investments for both Amazon and Microsoft exceed Okta's market cap of approximately $24 billion. This could give one of these large players the power to start a price war or invest more on innovation in this space should they choose to do so.

I think Okta can benefit by presenting itself as the neutral player in the identity cloud industry. Since it is not part of Microsoft, Amazon, or any other large cloud player, it does not have an obvious bias toward any other large cloud company. Still, with Okta facing potential competition from tech heavyweights, there is enough uncertainty for investors to feel nervous about paying massive premiums.

Another problem involves the company's revenue guidance. Despite what most would describe as a positive earnings report in late May, the company chose to reiterate rather than increase its projections. The elevated multiple prices Okta stock for perfection. Hence, a slowing growth rate could give investors a reason to question the company's valuation.

Okta brought a compelling product to the marketplace that has helped take its stock to a high valuation. However, the price of the stock has moved significantly ahead of the company's growth trajectory. Until the stock price more closely matches the company's growth rate, investors should consider watching Okta stock rather than buying.