Please ensure Javascript is enabled for purposes of website accessibility
Log In Help Join The Motley Fool
Free Article Join Over 1 Million Premium Members And Get More In-Depth Stock Guidance and Research
By Dan Caplinger – Jun 23, 2020 at 11:54AM

There's a lot of optimism about the overall economy, but it won't necessarily save some of the hardest-hit sectors.

Stocks were generally higher on Tuesday morning, with investors shrugging off concerns about the rise in reported COVID-19 cases in key states like Florida, Texas, and California. Instead, the focus appears to be on how quickly hard-hit Americans can get back to work and play their part in helping the overall economy return to more normal conditions. Just after 11 a.m. EDT, the Dow Jones Industrial Average (^DJI 0.97%) was up 176 points to 26,201. The S&P 500 (^GSPC 0.69%) rose 25 points to 3,143, and the Nasdaq Composite (^IXIC 0.19%) picked up 105 points to 10,162.

Tuesday's gains were broad-based, but there were still some notable laggards that missed out on the rally. Airline stocks were among the worst performers, with a couple seeing greater losses than the rest. Even as the economy gets back on track, it's still unclear whether airlines will bounce back as much as other companies do.

With airlines operating far below full capacity, raising capital in order to maintain financial reserves and offset negative cash flow has been essential. Unfortunately, it's been necessary to pull out all the stops in order to find viable funding sources, and that's weighing on shareholder confidence.

American Airlines Group (AAL -2.53%) announced the pricing that it received on its efforts to raise about $2 billion through offerings of stock and debt. American sold 74.1 million shares of stock to investors at a price of $13.50 per share, raising roughly $1 billion. The offering was larger than the originally anticipated $750 million, but it's hard to say that American's decision was motivated by strong demand, because the offering price turned out to be nearly 10% lower than where the shares closed Monday. 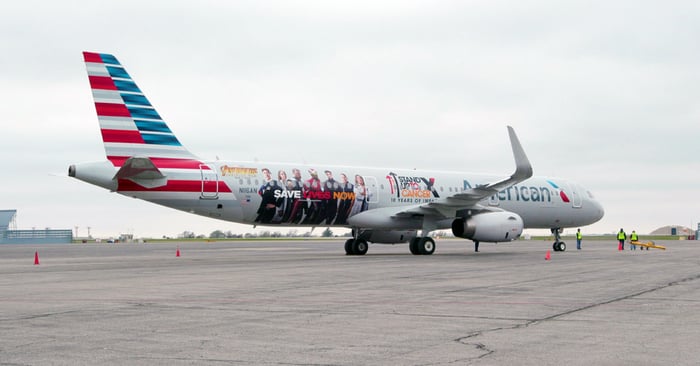 In addition, American priced five-year convertible notes to pay a yield of 6.5%. That offering also got upsized from $750 million to $1 billion, with noteholders being able to convert their bonds to stock at a price of $16.20 per share. Overall, the two offerings prompted a quick 6% retreat for the stock Tuesday morning.

Meanwhile, United Airlines Holdings (UAL -2.12%) announced that its MileagePlus program subsidiary will raise $3 billion through an offering of seven-year notes. The mileage program will then turn around and lend the net proceeds to United. Terms of the offering haven't yet been set, but the news sent United shares down 3%.

Elsewhere in the industry, losses were more modest. Southwest Airlines (LUV -1.91%) and Delta Air Lines (DAL -2.41%) were down around 1%, while smaller airlines generally saw losses in the 1% to 3% range.

Airline investors have two primary worries right now. On one hand, the prospects for airlines' fundamental business models are very much in question, because it's not obvious exactly what coronavirus-safe air travel will really look like. Currently, most airlines are doing things like leaving middle seats empty in order to generate somewhat more space, but maxing out at 67% load factors isn't a viable long-term solution without some significant changes in pricing practices. Whether it's new seat configurations, schedule changes, or more draconian measures, airlines might not be able to return to business as usual anytime soon.

On the other hand, the terms at which airlines are getting much-needed cash have become increasingly unfriendly to shareholders. Stock offerings dilute potential gains from a rebound, and so even if airlines get back to normal, their stock prices won't necessarily bounce back as sharply. Bond offerings at high interest rates weigh on earnings, and convertible bond offerings also have potential dilution issues.

Airline stocks will remain in the spotlight for a long time, and a lot will depend on how quickly passengers return to the skies. If new waves of COVID-19 lead would-be travelers to stay home, airlines could face turbulent conditions well into the future.