The COVID-19 pandemic has brought about some interesting business bifurcations in the economy. For illustration, look no further than the recent 2020 ad revenue projections from research firm eMarketer. As reported in The Wall Street Journal, eMarketer now expects Alphabet's (NASDAQ:GOOG) (NASDAQ:GOOGL) Google to post an annual advertising revenue decline of about 5% this year. That will mark the first annual decline ever for the search giant, which still managed to grow ad revenue about 8% even during the financial crisis of 2008-2009.

On the other hand, it appears as if ad revenue for Facebook (NASDAQ:FB) is projected to grow 5%, despite the overall U.S. advertising market set to decline by about 7%. Within the total ad industry, digital advertising is expected to take market share, growing 2% overall, while TV ad spend is set to drop 15% and print ads 25%.

So what is going on here between Google and Facebook? And what does it mean for your investment dollars when deciding between these two companies? 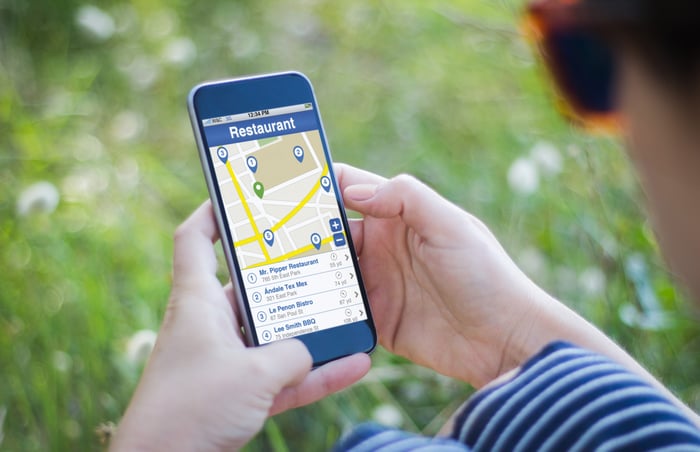 The main difference between Google's and Facebook's fate in 2020 lies in their exposure to travel- and leisure-related businesses, versus e-commerce and brand advertising. According to the research, about 11% of Google search ad revenue last year came from the travel industry. Obviously, the COVID-19 pandemic will be wiping much of those ad dollars out until a cure or vaccine is developed and demand for travel rebounds.

On the other hand, Facebook's ad base is more skewed to direct-to-consumer e-commerce, as well as mobile gaming, and not nearly as much to travel or out-of-home activities.

The projections fall in line with what both companies reported during their first-quarter earnings calls in April. Back then, Alphabet said that exiting March -- the depths of the pandemic quarantines -- search ad revenue was down by the mid-teens, and Google network partners ad revenue was down in the "low double digits." These declines were somewhat offset by YouTube's still being able to grow 9% year-over-year exiting March. Still, YouTube still counts for only about 12% of Alphabet's overall ad revenue and 9.9% of the company's total revenue. That means Alphabet's overall ad revenue growth was likely trending negative exiting March.

Meanwhile, on its conference call with analysts, Facebook management said its ad revenue had stabilized in early April to about even with the prior-year quarter. Thus, eMarketer's projections seem to back up these established trends from two months ago.

Does this mean you should buy Facebook and sell Google?

Both companies are still terrific candidates for your long-term portfolio, given their competitive advantages, profitability, and growth prospects. While Facebook is clearly faring a bit better on the ad front during the coronavirus pandemic, Google's ad revenue could get a bigger bump if COVID-19 treatments or a vaccine are introduced and the economy opens up more. In addition, Alphabet has a bigger cash pile on its balance sheet and is also expanding into other fields, such as cloud computing infrastructure and self-driving cars, to a greater degree than Facebook.

Facebook gets just about 100% of its revenue from advertising, whereas for Alphabet it's only about 82%, and that figure is decreasing a bit every quarter as cloud and Google "other" revenues grow at a faster pace than the overall company. Of course, 82% is still huge, but advertising growth is still not quite the end-all for Alphabet that it is for Facebook.

Still, both digital ad giants are primed to remain profitable this year, even with lower ad revenue, as digital advertising continues to take market share from traditional outlets. With Alphabet trading at 29 times earnings and Facebook trading at 33 times earnings, both stocks are still reasonably priced given their huge economic moats and strong cash positions on their respective balance sheets.

Why Google's U.S. Ad Revenue Will Decline but Facebook’s Will Grow in 2020 @themotleyfool #stocks $GOOGL $FB $GOOG Next Article
Current