The biotech company announced a contract with the U.S. Department of Defense.

On Tuesday morning, Inovio Pharmaceuticals (INO -3.39%) announced that it had won a $71 million contract with the U.S. Department of Defense (DOD) to scale up the manufacturing of its Cellectra 3PSP smart devices. The DOD will also acquire some of Inovio's Cellectra 2000 devices as part of the deal. Both of these devices are used to administer INO-4800 -- Inovio's potential vaccine for COVID-19 -- directly into the patient's skin. As a result of this announcement, the company's shares are rising sharply today, and are up by 22.4% as of 12:03 p.m. EDT.

According to Inovio, when INO-4800 is administered with the Cellectra 3PSP device, "the vaccine prompts the body's immune system to drive a robust immune response." The device boasts several attractive features, too. For instance, it's small, portable, easy to use, and able to be "stockpiled in large quantities without maintenance."

Note that this isn't the first time Inovio received funding from a third party to help advance the manufacturing of its proprietary Cellectra 3PSP device. Back in March, the company received a grant of $5 million from the Bill & Melinda Gates Foundation to speed up the testing and scaling-up of the device. 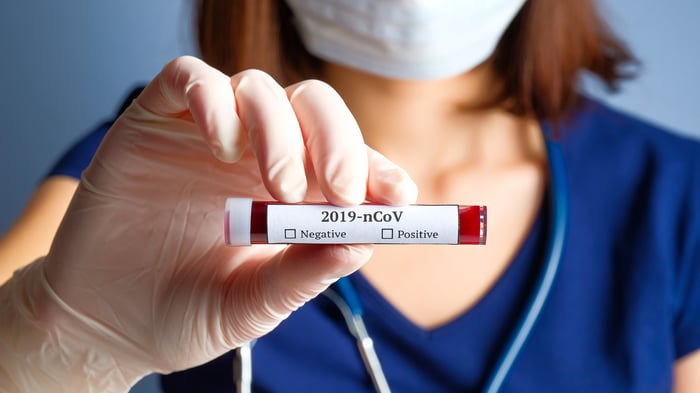 Inovio has long been a leader in the hunt for a COVID-19 vaccine. The company is currently running a phase 1 clinical trial for its investigational vaccine. The trial enrolled 40 healthy adult volunteers, each of whom will receive two doses of the INO-4800 vaccine 28 days apart. The trial will test the vaccine's safety and immunogenicity (its ability to trigger an immune response in the body). The biotech company expects results from this trial by the end of the month. Inovio also plans on starting a phase 2/3 trial, which will test the vaccine's efficacy, later this summer. As a result of its efforts to develop a vaccine for COVID-19, Inovio's shares are up by about 484% year to date.