The EU could retaliate if the World Trade Organization rules in its favor next month.

Although consumers have likely forgotten the ongoing tit-for-tat trade war with Europe because of the coronavirus pandemic and the deescalation of trade tensions with China, a new round of tariffs on EU consumer goods will remind them this particular battle is still hot.

The U.S. Trade Representative is proposing the imposition of duties on as much as $3.1 billion worth of products, including pork, Irish whiskey, beer, olive oil, cheese, leather goods, and more. 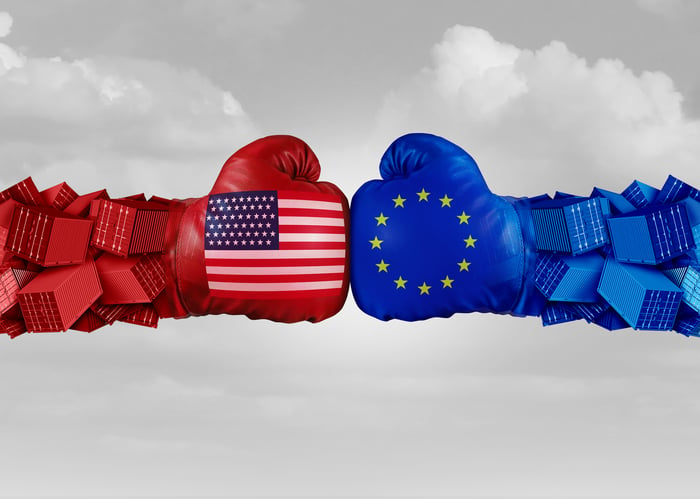 A game nobody wins

The roots of the ongoing trade battle stretch back 15 years to competing complaints before the World Trade Organization that the EU and the U.S. both illegally prop up Airbus and Boeing (BA -3.39%) with illegal subsidies. The WTO ruled in the U.S. favor last October and is expected to give the EU a similar victory next month.

It is a separate spat from the steel and aluminum tariffs President Trump imposed two years ago that led to retaliatory tariffs on goods such as American whiskey and motorcycles, duties that were designed to hit Brown-Forman's (BF.A -1.04%) (BF.B -1.23%) Jack Daniel's and Harley-Davidson (HOG -2.71%). U.S. distillers have lost some $337 million in sales because of the tariffs.

The U.S. is using what it calls "carousel retaliation," which means it rotates the goods it targets for tariffs. The Trump administration says the purpose of the tariffs is to get the EU to negotiate a settlement and it has not imposed the full measure of duties that it could, rather only about half.