The venerable Coca-Cola prints money even during economic downturns.

Cash flow is vitally important to a company's existence. With the economy in a recession, cash flow is an especially important metric to watch because many companies are feeling their revenue and earnings under pressure.

It's time to peek behind the curtain to see how this 134-year-old company does it. 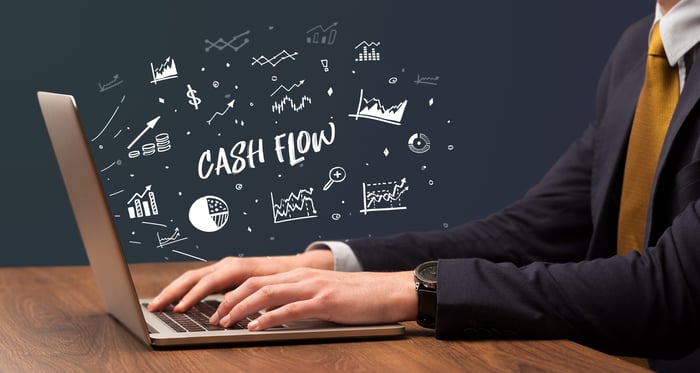 How the business generates cash

Coca-Cola is the world's largest nonalcoholic beverage company, selling popular drinks that include four out of the world's five best-selling brands: Coca-Cola, Diet Coke, Fanta, and Sprite. While the company is known for its soda, it is also a purveyor of water, sports drinks, juice, coffee, tea, and energy drinks. About 40% of last year's product introductions were either sugar-free or low-sugar, appealing to health-conscious consumers.

The company distributes its products around the world, selling them in retail stores and other places like stadiums, movie theaters, and restaurants. This generates a lot of cash flow. In 2017, Coca-Cola's operating cash flow was $7 billion and it grew to $10.5 billion last year.

In the first quarter, despite businesses shutting down due to the coronavirus pandemic, the company's operating cash flow was still $556 million compared to $788 million in the year-ago period. Due to more restrictions placed on people late in the first quarter, the company's second quarter results are likely to feel a bigger impact. However, these effects are temporary, and revenue and cash flow should show signs of improvement as business establishments such as restaurants reopen.

But Coca-Cola produces strong cash flow regardless of the economic environment. During the last recession, the company grew its operating cash flow from 2007's $7.2 billion to $8.2 billion in 2009.

What does the company do with this money? It returns a good chunk of it to shareholders via dividends, spending $6.8 billion for this purpose last year. The company is a Dividend Aristocrat, an elite group of companies that have raised dividends for at least 25 consecutive years.

Coca-Cola has done so for a remarkable 58 straight years. Most recently, the board of directors hiked April's payout from $0.40 to $0.41 per quarter.

A global powerhouse, Coca-Cola's exposure to international markets will help the company as different regions and countries open up and recover economically at different rates. With a geographically diversified business and products that people continue to purchase, it's no wonder Coca-Cola produces strong cash flow. Better yet, it doesn't sit idly by watching its cash stockpile. The company shares the wealth with stockholders through higher dividends.