Please ensure Javascript is enabled for purposes of website accessibility
Log In Help Join The Motley Fool
Free Article Join Over 1 Million Premium Members And Get More In-Depth Stock Guidance and Research
By Leo Sun – Jun 24, 2020 at 11:45AM

The announcement was surprising, since Microsoft invested heavily in Mixer's growth, integrated the platform into the Xbox One, and even declared war on Twitch by poaching top streamers like Ninja. Let's see why Microsoft abandoned Mixer, and why its team-up with Facebook could spell trouble for Amazon's (AMZN -3.01%) Twitch. 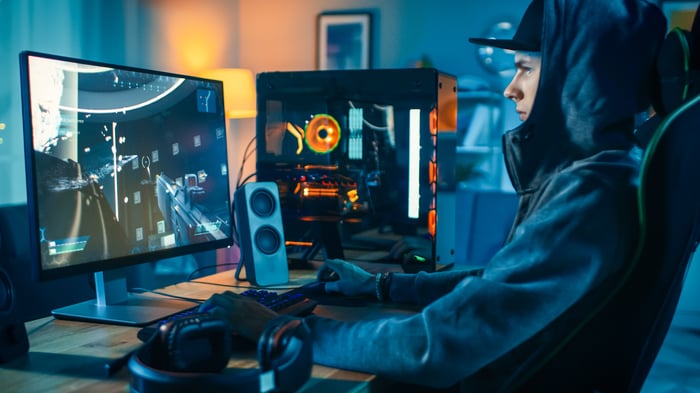 Lots of streamers, not enough viewers

Mixer accounted for 17% of all hours streamed in the first quarter of 2020, according to Streamlabs, putting it in second place behind Twitch's 72% share. Alphabet's (GOOG -1.39%) (GOOGL -1.40%) YouTube Gaming Live ranked third with an 8% share, while Facebook Gaming ranked fourth with a 3% share.

Mixer only captured 2% of hours viewed during the quarter, according to Streamlabs, putting it far behind Twitch (65%), YouTube Gaming Live (22%), and Facebook Gaming (11%). Mixer's hours viewed rose 14.9% from February to March, which outpaced YouTube and Facebook's growth, but Twitch's hours jumped 23% -- which likely widened its lead against the three underdogs.

Mixer likely struggled to match Twitch's first mover's advantage, YouTube Gaming's integration with its broader video ecosystem, and the strength of Facebook's underlying social network. In a blog post, Microsoft admitted the time required to grow its own live-streaming community to scale was "out of measure with the vision and experiences that Microsoft and Xbox want to deliver for gamers now."

Therefore, phasing out Mixer and blending its community with Facebook Gaming's was likely the right move at the right time.

Mixer's partners, who are granted more perks to monetize their streams, will automatically become partners of Facebook Gaming. All of Mixer's users were redirected to Facebook Gaming after Mixer officially shut down on June 22.

Mixer doubled the payments for all received embers and sparks (the virtual currency used for tips) until the shutdown, and converted all outstanding ember, spark, channel subscription, and Mixer Pro subscription balances to Xbox gift cards.

Microsoft claims Facebook Gaming will still "partner closely" with its Xbox ecosystem via its subscription service Xbox Game Pass, its cloud gaming service Project xCloud, and other services in the future.

Microsoft still wants Mixer's former audience to be part of its broader gaming business -- which generated 8% of its revenue in the first three quarters of fiscal 2020 -- but likely didn't see enough of a return on its investments in streaming (including its rumored $50 million contract with Ninja) alone.

Microsoft's retreat might initially seem like good news for Twitch, but the big influx of Mixer's streamers and viewers could generate fresh growth for Facebook Gaming, which poached top Twitch streamers like Disguised Toast and Corinna Kopf over the past year.

With Mixer out of the picture, the competition for top streamers will escalate between Twitch, Facebook, and YouTube, and force all three platforms to offer more lucrative revenue-sharing partnerships.

Amazon doesn't disclose Twitch's financials, but The Information estimates it only generated about $300 million in ad revenue last year, which missed its own expectations of $500 million to $600 million. Amazon is also likely running Twitch at slim margins or a loss, due to the high costs of maintaining its infrastructure and monetizing streams.

The new partnership between Microsoft and Facebook could make it tougher for Twitch to grow its ad revenue or expand its margins. That pressure won't meaningfully hurt Amazon, which generates most of its revenue from its e-commerce and cloud businesses, but it could force it to ramp up its investments in Twitch -- which complements its streaming media and game publishing businesses.