Please ensure Javascript is enabled for purposes of website accessibility
Log In Help Join The Motley Fool
Free Article Join Over 1 Million Premium Members And Get More In-Depth Stock Guidance and Research
By Zhiyuan Sun – Jun 24, 2020 at 6:23AM

This small-cap stock is developing a technology that could revolutionize biotech.

Since the beginning of the year, shares of an under-the-radar biotech company called Dyadic International (DYAI 0.57%) have rallied more than 87%. Without a doubt, the company is a tough nut to crack. Wading through Dyadic's presentations reveals technical jargon such as "thermophilic fungus" and "gene expression systems" that pose a barrier for potential investors trying to understand its business.

However, beneath all the scientific language is what I believe a company that can revolutionize the biotechnology industry. Even though shares have gone up a lot over the past few months, I think Dyadic is significantly underpriced compared to its future potential. Let's take a look at why. 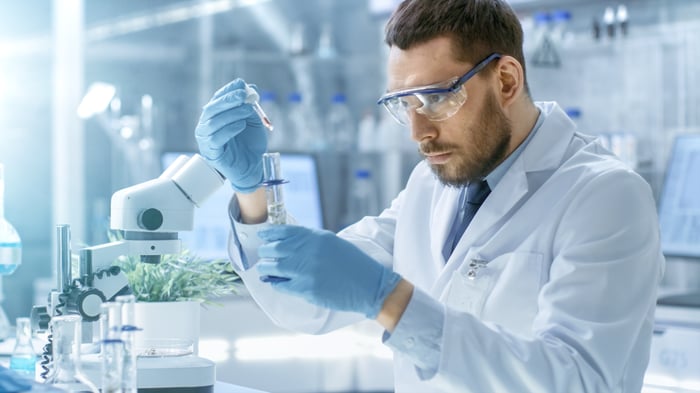 What are gene expression systems?

Currently, many vaccines, antibodies, drugs, and animal health products in development by biotechnology companies use five different types of gene expression systems, which are genetic constructs that are designed to produce a therapeutic protein in the lab. These five different types are bacteria, yeast, insect cell lines, and mammalian cell lines, and genetically modified plants. Together, these expression systems comprise the heart of the global biologics market, which is expected by Credence Research to grow to $580.5 billion by 2026. Each type has its own unique set of pros and cons.

For example, E. coli (bacteria) and yeast expression systems are used to produce high volumes of enzymes and small-protein molecules for a low cost but are not useful for creating complex proteins. On the other hand, while mammalian cell lines can morph into antibodies (such as for cancer treatments) and complex protein structures, their production yields are abysmal.

What is Dyadic's new technology?

Dyadic, however, claims it has discovered a new class of gene expression systems that are not only low cost and high yield (like E. coli), but can be used to produce complex proteins (like mammalian cell lines). The expression system that merges the best of both worlds is C1, a fungus that can survive at high temperatures.

Studies demonstrated C1 could be used as a foundation for producing antigens, virus-like particles, monoclonal antibodies, and antigen-binding proteins. Additionally, C1 may possess the potential to have higher potency than mammalian and insect cell expression systems when used as a basis for vaccines. In addition, C1 may be able to accomplish these tasks while yielding 29 to 100 times more volume than traditional E. coli during its production process based on fermentation data.

Is the company a good investment?

The company's technology is in the development stage and has been vetted by three biopharmaceutical firms. In a partnership agreement with Sanofi (SNY 1.08%), Dyadic's C1 was able to express all seven of Sanofi's therapeutic and vaccine proteins in a feasibility study and is currently awaiting the next stage of collaboration by Q2 or Q3. If successful, Dyadic would be entitled to research funding, milestone payments, and royalties for 15 years beginning from the first commercialized sale.

The financial case for investing in Dyadic is also excellent. Despite being a development-stage company, Dyadic has more than $36 million in cash and equivalents, possesses no debts or warrants, and is operating at a net loss of only $2.2 million per quarter in Q1.

If C1 achieves recognition in the biotech sector, the company could either be acquired or license its technology for royalties, as C1 could pose a serious threat to current gene expression systems. Hence, I think biotech investors are getting this $270 million market cap company for essentially pennies on the dollar, and would not be surprised if the company eventually emerges as a leader in the gene technology sector.