Please ensure Javascript is enabled for purposes of website accessibility
Log In Help Join The Motley Fool
Free Article Join Over 1 Million Premium Members And Get More In-Depth Stock Guidance and Research
By Jeremy Bowman – Jun 24, 2020 at 6:19AM

The off-price giant will outlast a host of rivals that are succumbing to the crisis.

TJX Companies (TJX -1.19%), the parent of TJ Maxx, Marshall's, and Home Goods, is the most valuable apparel retailer in the U.S.

The company's off-price strategy has been an overwhelming success over the last decade, as TJX has posted consistently strong comparable sales, and peers like Ross Stores and Burlington Stores have performed well too, showing the advantages of the off-price model.

However, the coronavirus pandemic has hammered brick-and-mortar retailers hard. TJX was forced to shut down all of its U.S. stores and even closed down its website. Revenue fell by more than 50% to $4.4 billion in the first quarter.

Most of its apparel peers are focused on closing stores, investing in e-commerce, and streamlining the business as a greater percentage of sales are headed online, given that many Americans don't feel safe shopping in stores.

Nonetheless, TJX said in its earnings report last month that sales at reopened stores were above year-ago levels, a sign of pent-up demand and that consumers were eager to hunt for bargains during a recessionary climate. 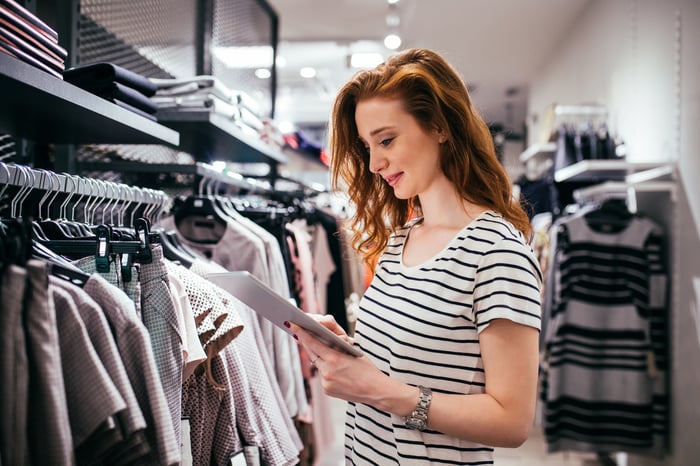 The off-price model's resistance to e-commerce has traditionally been a strength as it prevented online retailers like Amazon from taking market share, and only about 2% of its $41.7 billion the company's sales last year came from e-commerce. The off-price model is a poor fit for the online channel. TJX relies on quick turnover of fast-changing merchandise sourced from manufacturers and other retailers through closeout sales, manufacturing errors, order cancellations, or from vendors with extra product. That allows the company to sell brand-name merchandise for 20% to 60% below full price.

The model is a better fit for brick-and-mortar stores as selling online requires taking photos of each item, a challenge as TJX often sells one-offs of a product, and paying for shipping and returns would cut into already-discounted prices.

For consumers, the benefit is clear. They can get deep discounts on brand-name merchandise and enjoy the "treasure hunt" effect of being able to discover new items and great deals every time they go to a store.

Why this could be an opportunity

The strong performance in reopened stores shows that TJX could be a surprising winner during the pandemic. The company's locations tend to be in strip malls or on busy streets, often near supermarkets and other high-traffic businesses, and away from malls, which are the most troubled brick-and-mortar outlet right now. The recession should also be a tailwind for the company, encouraging more consumers around the world to hunt for deals.

But the biggest opportunity for the TJ Maxx parent is the potential to grab gobs of market share. Apparel bankruptcies are already flooding in with J.C. Penney, Stage Stores, Neiman Marcus, J.Crew, and ALDO Group having filed for Chapter 11, and many others teetering on the brink of insolvency. In home goods, Tuesday Morning filed for bankruptcy and plans to close at least 130 stores, and there will likely be more in that sector.

Though e-commerce sales are surging, and the online channel will take market share from brick-and-mortar retail during the pandemic, shopping in stores isn't going away. Stores offer a number of things that e-commerce can't: a social experience; an opportunity to physically handle merchandise and try on clothes; the ability to find deals that are unavailable online; and a reason to get out of the house or take a break from the usual routine.

Coresight Research estimates that 20,000 to 25,000 U.S. stores could close this year, many of them in malls. That upheaval will eliminate a substantial percentage of TJX's brick-and-mortar competitors, and with fewer stores around, the company's ability to draw in customers and create future Maxxinistas should only grow. The pandemic may still be a challenging period for TJX like other brick-and-mortar retailers, but when it ends, the company should be in an excellent competitive position and standing tall among its fallen rivals.