Please ensure Javascript is enabled for purposes of website accessibility
Log In Help Join The Motley Fool
Free Article Join Over 1 Million Premium Members And Get More In-Depth Stock Guidance and Research
By Will Healy – Updated Jun 25, 2020 at 3:34PM

Despite their common designation as "discounters," Costco (COST 0.03%) and Dollar Tree (DLTR 0.47%) remain fundamentally different retail stocks. One tends to sell higher-scale items at heavily discounted prices to its members. The other emphasizes closeout items and ultra-low prices and no membership requirement.

These two stores have remained open throughout the pandemic. As providers of groceries, government authorities deemed both entities essential businesses. Nonetheless, both companies faced limitations and challenges as they coped with the harsh business conditions created by reaction to the coronavirus pandemic.

These problems have not affected the underlying stocks in the same way. Given their differences, investors should take a close look at both businesses and their financials to find which company is in a better position to deliver higher returns. 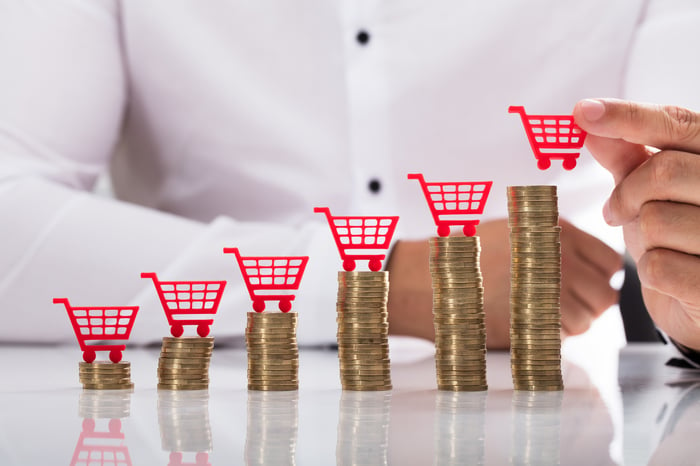 Over the years, investors have rewarded Costco for its steady growth and resilience in the face of economic challenges. While it sold groceries during the pandemic, Costco temporarily closed down or reduced the hours of many of its in-store operations, such as food courts, opticals, travel agencies, and hearing aid centers.

However, the company has now begun to reopen these operations. Also, many of Costco's bulk-item offerings continue to appeal to consumers wanting to conserve cash during this time or stock up on necessities while staying at home.

Costco's comparable sales for May registered a 5.4% increase from last year's levels. This was an improvement from the 4.7% decrease in April during the height of the lockdowns. For the quarter ending on May 10, comparable sales rose 4.8%.

Costco stock has also remained resilient during this economic downturn. It trades for about 32.5 times earnings, significantly above the five-year average forward P/E ratio of 28.4. Consequently, this P/E may appear high considering the forecasted profit growth. Analysts predict a 2.8% profit increase in earnings for the warehouse giant in this fiscal year. Over the next five years, analysts forecast average earnings growth of almost 7% per year.

The state of Dollar Tree

Like Costco, Dollar Tree appears positioned for growth as well. The $1 price point of most of Dollar Tree's items tend to draw more customers in a time of high unemployment. Still, this advantage has not shielded the company from some serious challenges.

Dollar Tree acquired Family Dollar back in 2015. The Family Dollar chain, which appears to operate on a similar model as its more direct peer Dollar General, has typically not produced substantial gains for the company. However, in the previous quarter, same-store sales moved higher by 15.5% at Family Dollar while falling 0.9% at Dollar Tree.

Still, more recently, Dollar Tree has run into issues due to its dependence on Chinese-made goods. First, the U.S.-China trade war hampered the company. More recently, the COVID-19 pandemic further cut into production.

Also, the company made a strange decision to shut down its online ordering for a time. Though the online sales portal came back in May, it seems like the company missed an opportunity unnecessarily.

However, for all of its problems, Dollar Tree sells at a forward P/E ratio of around 19.1, close to the five-year average for this metric. It also saw an 8.2% increase in consolidated net sales during the first quarter of 2020. Since the quarter ended on May 2, the pandemic affected about half of the quarter.

By extension, these sales boosts should have a positive effect on earnings. For this year, analysts forecast 6.3% earnings growth for the ultra-discounter. Over the next five years, they believe these increases will average just under 7% per year.

Although I expect Costco to remain in a growth mode for years to come, I have to give the current edge to Dollar Tree. Yes, Costco stock has outperformed Dollar Tree over the last year. Also, Costco does not have as much dependence on China. 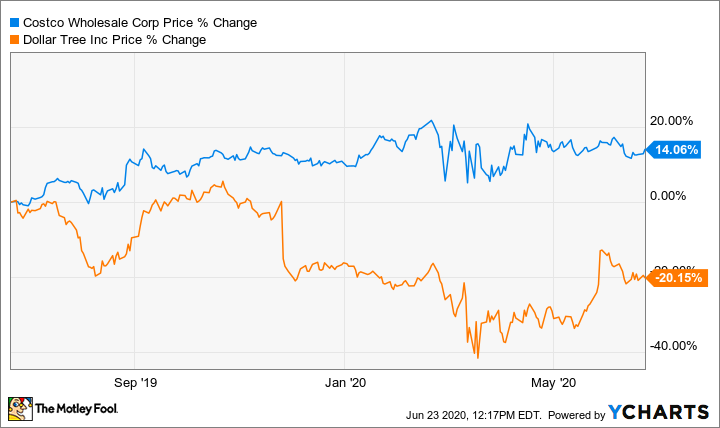 Still, despite Dollar Tree's problems, its takeover of Family Dollar may finally pay off for the company. Moreover, with unemployment levels worse than during the financial crisis, Dollar Tree's low-cost items will remain a draw for cash-strapped consumers.

Costco will bolster its growth as it moves into smaller U.S. metros and more international markets. Still, with growth levels remaining in the single digits, the current forward multiple appears well ahead of its growth rate.