Please ensure Javascript is enabled for purposes of website accessibility
Log In Help Join The Motley Fool
Free Article Join Over 1 Million Premium Members And Get More In-Depth Stock Guidance and Research
By Leo Sun – Jun 25, 2020 at 10:00AM

Apple will transition from Intel’s CPUs to its own custom ARM chips over the next two years.

Apple (AAPL -1.51%) recently announced it will gradually replace Intel's (INTC -1.96%) chips with its own custom ARM-based chips in its future Macs over the next two years. The new Macs will run on Apple's custom system on chips (SoCs), which bundle together a first-party CPU, GPU, and SSD controller.

The announcement, which was made at Apple's annual Worldwide Developers Conference (WWDC), will finally end the tech giant's relationship with Intel, which started in 2005 after the former stopped using Power PC processors.

The news wasn't surprising since rumors regarding Apple's plans to drop Intel have circulated over the past two years. Intel's ongoing chip shortage, caused by its troubled development of 10nm chips, likely hastened Apple's decision. Should Intel's investors fret over the loss of this major client?

How much money does Intel make from Apple?

Intel doesn't disclose how much money it generates from Macs, but UBS analyst Timothy Arcuri estimates Apple only accounts for 2%-3% of Intel's annual sales, or $1.5 billion to $2.3 billion of its trailing 12-month revenue.

Intel didn't provide any guidance for the full year, but analysts are only expecting its revenue to rise about 3% this year and 1% next year due to COVID-19 disruptions, its own chip shortage, and competitive pressure from AMD (AMD -2.22%).

Therefore, Apple doesn't account for a huge slice of Intel's business, but the loss could easily break Intel's fragile streak of single-digit revenue growth. Intel could also continue ceding market share to AMD over the next two years as Apple phases out its Mac chips.

Apple can transition away from Intel's CPUs more easily than other PC makers because it completely controls the Mac's hardware and operating system. Recent versions of macOS are designed to run on Intel's x86 CPUs, but future versions will be optimized for ARM CPUs -- which already power its iOS, watchOS, and tvOS devices. 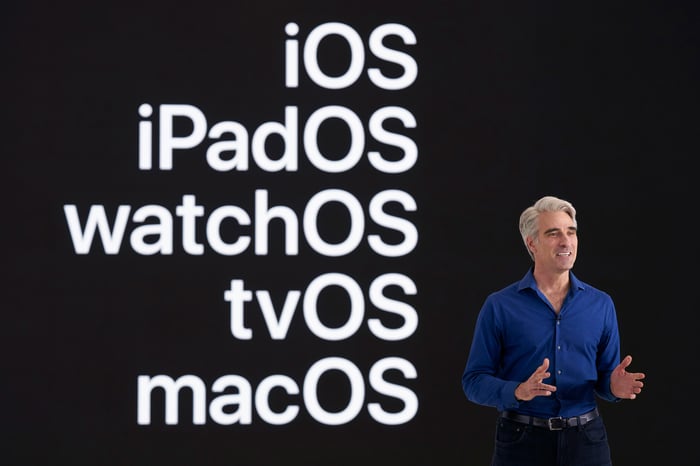 Windows-based PC makers can't make that transition so easily, because the main versions of Windows 10 are all designed for x86 processors. Microsoft (MSFT -1.27%) has developed slimmed-down variants of Windows for ARM processors, which are more power efficient and offer cellular connectivity, but these CPUs can only run apps from the Microsoft Store.

Companies like HP, Lenovo, Samsung, and Microsoft have all released ARM-based Windows laptops, but they remain niche devices in a market dominated by x86 CPUs. Unlike Apple, most Windows PC makers don't design their own chips -- so Intel's investors shouldn't worry about other PC giants dumping its chips yet.

But the long-term threats remain

Apple's decision won't cripple Intel, but it indicates x86 CPUs are gradually losing ground to ARM-based ones in PCs.

Intel already lost the mobile CPU market to ARM chipmakers like Qualcomm (QCOM -2.01%) over the past decade, and the new niche market for ARM-based PCs could gradually gain mainstream appeal as users prioritize wireless connectivity and battery life over broad support for legacy apps. Qualcomm is eager to meet that demand with its Snapdragon notebook SoCs.

Intel is well aware of those long-term threats. Its new lineup of Hybrid "Lakefield" Core CPUs, which boast a smaller package size and better power efficiency than its predecessors, target ARM-based chips in lightweight laptops and foldables. However, time will tell if these new chips can prevent Intel from succumbing to death from a thousand cuts in the PC market.

For now, investors should simply add Apple to a growing list of headwinds for Intel, which already include AMD's market share gains, ARM-based chipmakers, and its unresolved chip shortage.