Please ensure Javascript is enabled for purposes of website accessibility
Log In Help Join The Motley Fool
Free Article Join Over 1 Million Premium Members And Get More In-Depth Stock Guidance and Research
By Adria Cimino – Updated Jun 26, 2020 at 9:14AM

Decisions the coffee chain is making now are set to drive long-term growth.

Like so many other consumer goods companies, Starbucks (SBUX -0.62%) is still in a bit of a rough patch. The coronavirus outbreak led to temporary store shutdowns -- first in its fastest-growing market, China, followed by its biggest market, the U.S.

During its latest earnings report, the coffee shop giant warned that the negative financial impact from the crisis would be worse in the next report. That's because the crisis hit the U.S. late in the quarter. 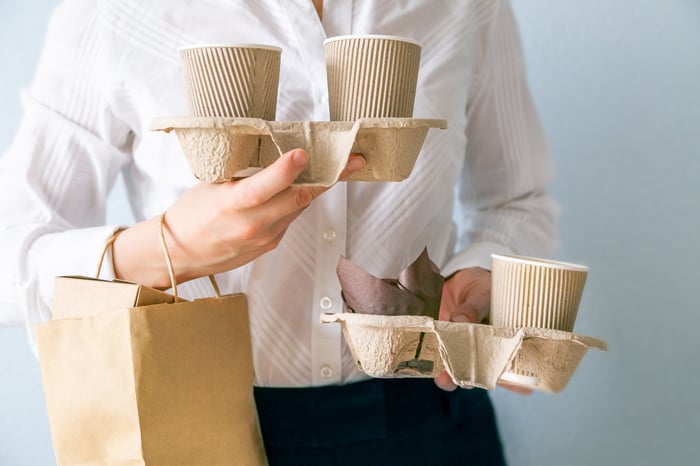 Considering this, why would you be smart to stock up on Starbucks right now? Because of these two actions Starbucks is taking:

When many of us think of Starbucks, we imagine sitting around with friends over coffee in one of its cafes. But about 80% of transactions at Starbucks are actually "on the go" -- and that figure was calculated before the coronavirus pandemic. The health crisis, of course, gave this movement an extra push as stores closed and consumers stayed home as much as possible. In the last week of April, 97% of Starbucks sales were made via drive-thru and mobile order and pay.

Now, Starbucks is accelerating a move to make on-the-go orders even more convenient -- and free up space in its cafes for a relaxing in-store experience. The company has been testing two Starbucks Pickup shops, one in Manhattan and another in Toronto. The shops serve customers who order in advance and pick up or those who choose delivery through Uber Eats.

Prior to the coronavirus outbreak, Starbucks planned on opening Starbucks Pickup shops over a three- to five-year period. Now, Starbucks is speeding up the process, aiming for a rollout over the next 18 months. Plans include repositioning some existing cafes, closing as many 400 already-existing stores, and gradually opening up even more Starbucks locations that suit local demand. Since to-go orders were already popular before the health crisis (rather than being uniquely related to lockdowns), we can expect the movement to continue once the U.S. emerges from the crisis.

Starbucks recently resumed its store addition plan in China as recovery from the coronavirus outbreak there continues. China is struggling with a second wave of the virus in Beijing, which may slow consumers' return to normal routines. But the country represents a significant opportunity for Starbucks in the long term. China's coffee market is expected to grow at a compound annual growth rate (CAGR) of more than 10% through 2025, according to Mordor Intelligence.

Starbucks is addressing the opportunity by aiming to open about 500 new stores in China this fiscal year. The company already has more than 4,400 company-operated stores there. That's about half as many as in the U.S. and 80% of the original plan for this year in China.

In the quarter prior to the outbreak, total revenue climbed 15% in China, while revenue in the U.S. rose 9%. Digital business and the loyalty program picked up speed. In China, mobile orders represented 15% of total revenue compared with 10% a quarter earlier. And the Starbucks Rewards program posted 40% growth from the year-earlier period. These points are key. The first, the digital business, targets how more and more people are shopping. And the second, the rewards program, is all about keeping those customers loyal.

Why buy the shares now?

As the market crashed, Starbucks shares were trading as low as about 18 times trailing 12-month earnings. Though they are now more expensive, at 26, that's still a deal compared with last year's peak of about 36 times earnings. The stock, after rebounding from March lows, is now down 14% this year.

We should expect lackluster earnings from Starbucks in the coming quarters. The company has warned us that recovery in the Americas will extend into the next fiscal year. So it's very possible the shares will flounder during this period, offering long-term investors the opportunity to stock up. And after that? Sit back with a good cup of joe -- and in a few years reap the rewards of Starbucks' efforts in on-the-go orders and expansion in China.